Accountability in the energy industry has become more critical than ever before, and operators have to deliver on what they promise, which includes improving the environment, according to Parsley Energy Inc. CEO Matt Gallagher. 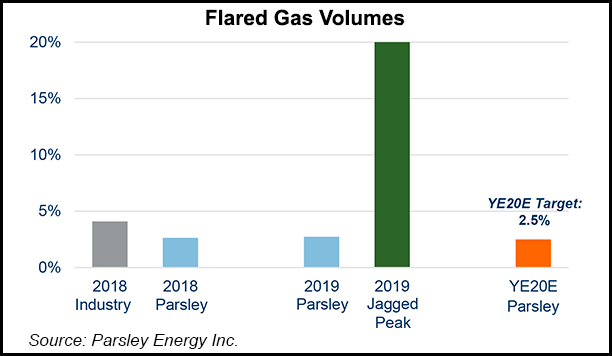 The “credibility gap” in the oil and gas industry can only be resolved by delivering on what is important to shareholders and to the public, he said during a fourth quarter conference call last week to discuss performance.

The Austin, TX-based independent last fall spent about $2.3 billion to buy out fellow Permian operator Jagged Peak Energy Inc., and a lot is going into integrating the operations, the CEO said. However, as the integration continues, the independent is not taking its eye off the ball on other initiatives that are important to stakeholders, including sustainability.

“We put organizational excellence on this front and center as it is quickly becoming a requisite for a license to operate,” the CEO said. “Fostering a culture that promotes and prioritizes community stewardship is not a new revelation here at Parsley…But I do believe we needed to do a better job on telling our story on the ESG front, and that also includes providing more transparent data.”

Even with the transparency efforts, though, he noted that not everyone is aware of how much industry is doing to improve operations. He took aim in particular at the slate of Democratic candidates running to oppose President Trump in the November election. Some candidates have vowed to ban the use of fracturing in drilling operations, which is used hand-in-hand in producing from shale and tight resources.

“I think it’s crucial to tell our story because it’s a good one,” Gallagher said. Parsley was founded “in the midst of the financial crisis in 2008 by two people with zero production to our name. Through innovation, grit and great people, we now produce enough energy to power the entire population of Las Vegas, which is where the debate was held.”

Continuing to produce oil and gas in the United States improves energy security at home instead of handing it back to foreign governments, he said.

“We should demand higher standards on ESG from our domestic producers, and we should support American jobs.”

A “recurring topic of concern for multiple stakeholders is natural gas flaring,” he noted. “Mitigating flaring has been a long standing priority for Parsley,” which has kept volumes to under 3% of total gas production in 2018 and 2019. “But there is still room to improve.”

A big issue is with Jagged Peak, which was flaring more than 20% of gas production over the course of last year; in some months it was more than 25%, Gallagher said.

“This will not be acceptable going forward. Our near-term mission is to reduce the flaring on these recently acquired assets to less than 5% by year-end. We are backstopping this commitment by including a quantifiable flaring mitigation target” as well as tying it to compensation plans for “all Parsley employees.”

Parsley still is targeting flaring targets in the Permian overall to be “at or below 2.5%” by year-end 2020.

“The past year was a resounding success for Parsley on many fronts, but we all know the market looks forward,” Gallagher said. This year the company plans to “maintain both that sense of urgency and accountability.”

“The ultimate driver is insufficient infrastructure on the gas gathering side,” she said. The company is working with gas processing partners, “and our action plan is in full flight across our multidisciplinary integration team…As operators, we feel responsibility to reduce methane emissions across our operational footprint, so we’re excited and anxious to elevate these assets to Parsley standards.”

Meanwhile, sustaining free cash flow “in a $50 oil world continues to be a key objective,” Gallagher said. “Frankly, it is now a mandatory objective given our commitment to a regular dividend program.” At an average $50/bbl West Texas Intermediate oil price, Parsley expects to generate at least $200 million in free cash flow this year.

“We’re also striving to preserve and build upon the hard earned capital efficiency gains made in 2019. If you are not climbing the ladder, you’re getting passed by or falling down,” said the CEO. “Standing still should not be a desired outcome for operators to have sufficient scale and a softer services environment. Thus, we are again putting a measurable target on the board and are aiming for 2-5%-plus improvement year/year.”

“Our latest uptick in capital efficiency is largely due to the capital side of the ledger, where strong fourth quarter efficiencies and cost control help push our spin rate nearly $30 million below the bottom end of our full-year 2019 budget.”

This year the “basic playbook will not be changing,” said the COO. The improvements in efficiencies, however, have allowed capital spending in 2020 to be reduced to $1.6-1.8 billion.

Drilling efficiencies enabled Parsley to drop to 10 development rigs in the final three months from 11. Jagged Peak was running five rigs when the acquisition was completed in early January. Parsley expects to reduce its overall rig count to 14 from 15 in the coming months.