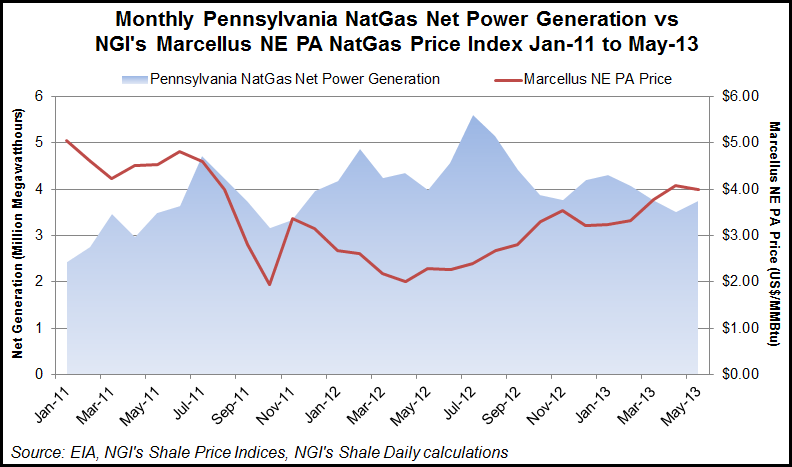 Scheduled for completion in January 2016, the facility will be the first new power plant in the Commonwealth specifically developed to take advantage of its proximity to the Marcellus Shale gas formation.

Panda said it will immediately start construction of the $800 million-plus facility on the 33-acre site. Vienna, VA-based Moxie received approval for an air quality plan on the project from the Pennsylvania Department of Environmental Protection last October (see Shale Daily, Oct. 15, 2012).

Todd W. Carter, president and senior partner of Panda Power Funds, said that after looking at a number of opportunities in the PJM Interconnection region, the company was impressed with the project and the caliber of work done by Moxie Energy.

Carter said that the PJM Interconnection is considered one of the most attractive and liquid markets for power generators in the United States, adding that of equal importance is the fact that approximately 20,000 MW of coal-fired capacity retirements have been announced in the region, setting the stage for tightening reserve margins. Declining economics and increasing environmental costs are expected to drive additional coal-fired retirements, the company added.

Panda and Moxie are not the only players looking to capitalize on the one-two punch scenario in the region of retiring coal capacity and ample supplies of inexpensive Marcellus gas. The current count of new gas-fired plant proposals in Pennsylvania’s Marcellus Shale stands at nine (see Shale Daily, May 20).

The Liberty generating station will be located in Asylum Township in Bradford County, approximately 45 miles northwest of Scranton, PA. When completed, the generating station will be able to supply the power needs of up to one million homes in Pennsylvania. Panda said the two single-shaft power trains will make the Liberty plant one of the cleanest, most efficient natural gas-fueled power plants in the United States. In addition, the plant will be cooled with air rather than water, so Liberty will not draw water from, or discharge water into, the Susquehanna River.