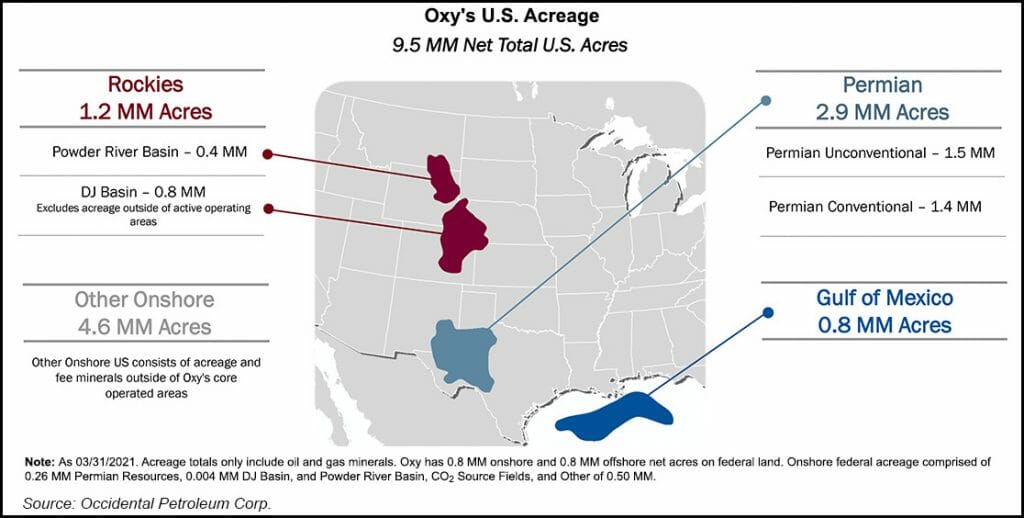 Hollub shared a microphone with her management team to discuss first quarter results for Oxy, as it is better known. The administration in January issued a two-month pause on new drilling permits, but it had little impact on the Houston-based independent.

“We have now started to see the process move forward again with the approval of new permits,” Hollub told investors. “We currently do not expect a permitting process to have an impact on our activity levels,” with an average of 11 rigs set to work the Permian Basin and two rigs in the Denver-Julesburg Basin in Colorado.

Still, Hollub is concerned about what could happen if the moratorium were permanent. The CEO had testified in late April before the Senate Energy and Natural Resources Committee to support lifting the federal leasing moratorium.

“As I told the committee, continued onshore oil and gas development means high paying jobs, community reinvestment and meeting energy and product needs during the transition to a low-carbon economy.”

The plan going forward is to continue to work with Congress and the Biden administration “on ways to create clarity and short- and long-term regulatory certainty.”

“That’s a scenario that gave us strength in world politics. It gave us the ability to completely supply our own oil and products domestically. We would not have to import very much at all at 13 million b/d…because I believe our refining capacity is somewhere near 17 million b/d. So we would have some capability to be almost completely independent.

“With a moratorium on federal leases, that would really drive down our industry’s ability to react.”
Oxy has about 9.5 million acres to develop in the Lower 48 and Gulf of Mexico (GOM).

“Of all that 9.5 million acres, I think only about 1.6 million are federal and about half of that is offshore.” Some exploration and production (E&P) companies “are in better positions than others, and we believe we are.”

The leasing moratorium has been touted by advocates as a way to reduce emissions in the United States. However, that’s the wrong way to view it, according to Hollub. It’s “definitely a bad move because we are very prudent with what we’re doing in the United States compared to a lot of countries around the world.”

E&Ps are voluntarily reducing emissions and pushing technologies to cut even more carbon from their processes, Hollub told investors.

“For me, the biggest worry is not on existing leases. It’s just that the moratorium could be extended for a long time…”

During the first quarter, Oxy generated $1.6 billion of free cash flow, “which is our highest level of quarterly free cash flow in a decade,” Hollub said. “We also closed almost $500 million of divestitures, repaid $274 million of debt and exited the quarter with approximately $2.3 billion of unrestricted cash.

“Our plan to stabilize 2021 production at our fourth quarter 2020 exit rate is on track. We’ve delivered first quarter production from continuing operations of over 1.1 million boe/d, with total companywide capital spending of only $579 million.”

While output overall was down year/year, Hollub said the oil and gas segment in the United States “continued to push the envelope with new efficiency gains as we seamlessly transitioned into the first quarter.”

Hollub noted that the Permian team had “outperformed expectations in the first quarter by setting new drilling records” in New Mexico and Texas. “Our first quarter Permian achievements are especially impressive as we have now augmented the efficiency of our Oxy Drilling Dynamics with remote directional drilling, an exciting innovation that allows the drillbit to be steered from a separate location.”

“Being able to control and optimize our operations remotely and instantaneously apply shared expertise to similar activities has numerous advantages that we expect our operations to benefit from in the future,” Hollub told analysts.

Oxy overcame the “operational challenges” imposed by Winter Storm Uri during February with aplomb, Hollub said.  “Our domestic oil and gas operating cost of $7.20/boe continues to demonstrate the lasting impact of our cost reduction measures and includes about $83 million of a typical cost related to the winter storm. I want to note that we have fully recovered from the storm with no lasting impact, even with incurring storm related costs in the first quarter.”

Full-year U.S. operating guidance “has only increased by 10 cents/boe, which represents a significantly smaller increase than the approximate 25 cents/boe that the $83 million in total operating expenditures would have otherwise added.”

Meanwhile, the Midstream and Marketing segment outperformed in the first three months of this year. The uptick was “primarily driven by our ability to optimize long-haul gas transportation in the Rockies, along with the timing impact of export sales,” Hollub said.

The CEO also took time to again review Oxy’s “pathway to achieve net-zero emissions.” The plan is centered around capturing and then reusing carbon dioxide (CO2). To that end, Oxy is working to bring online its first commercial-scale direct air capture plant in the Permian to capture up to 1 million metric tons/year of CO2. Final front-end engineering and design is beginning this year with construction still set to start in 2022.

“We understand that many of our stakeholders have a desire to learn more about our low-carbon projects and the returns these projects will generate,” Hollub said. “While we are not yet able to share the economics, we will have created partnerships” to help finance and deploy the carbon capture utilization and storage technology.

“We are creating these cross-industry opportunities for others to invest alongside us to maximize the deployment pace and carbon removal impact.”