U.S. oil and natural gas producers reacted swiftly to the plummet in crude prices on Monday by reducing planned spending and activity through the rest of the year. 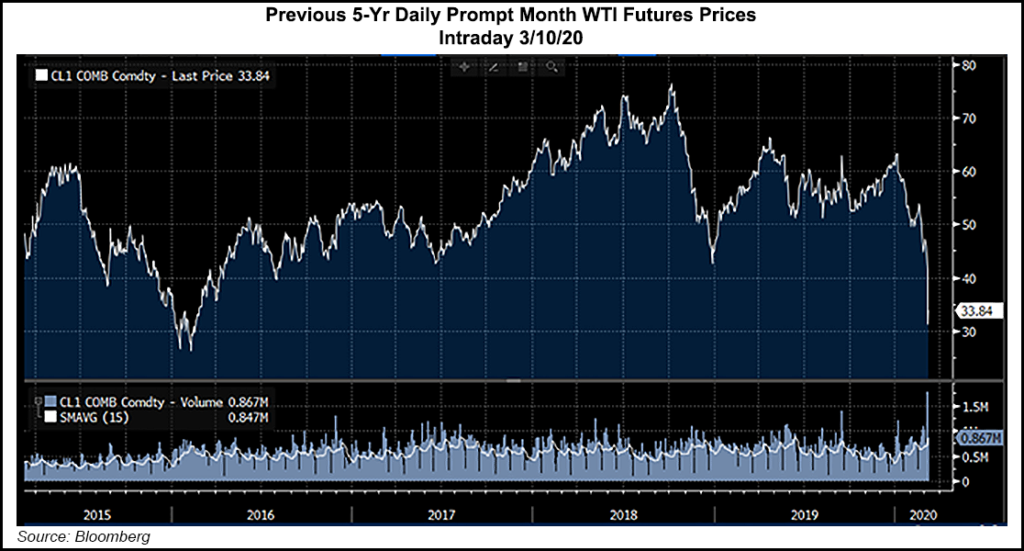 The board of Occidental Petroleum Corp. (Oxy) on Tuesday pummeled its quarterly dividend, slashing it by 86% to 11 cents/share from 79 cents effective in July. It also plans to reduce capital expenditures (capex) this year to $3.5-3.7 billion from $5.2-5.4 billion.

“Due to the sharp decline in global commodity prices, we are taking actions that will strengthen our balance sheet and continue to reduce debt,” said Oxy CEO Vicki Hollub. “These actions lower our cash flow breakeven level to the low $30s WTI, excluding the benefit of our hedges, positioning us to succeed in a low commodity price environment.”

Oxy joined a growing list of domestic exploration and production companies already bracing for West Texas Intermediate (WTI) oil prices to average in the $30s this year. Permian Basin pure-play Diamondback Energy Inc. on Monday announced it would immediately cut completion crews to six from nine, and it plans to drop two rigs in April and release another one by the end of June.

“In response to the recent commodity price volatility from simultaneous supply and demand shocks, we’re taking swift and decisive action to defend our cash flow generation, protect our balance sheet and fund our dividend,” said Marathon Oil CEO Lee Tillman. The financial framework now in place “has served us well, and it positions us to navigate a challenging oil price environment ahead.”

The Marathon management team plans to “continue to monitor commodity price developments and retains flexibility to adjust capital spending plans further in response to a dynamic environment, with minimal long-term commitments for services and materials.”

Permian pure-play Parsley has revised its baseline capex assumption from a $50/bbl West Texas Intermediate oil price to a $30-35 average price for the rest of this year.

“The combination of a strong balance sheet and corporate agility is critical in these challenging and volatile times,” said Parsley CEO Matt Gallagher. “We must act swiftly with an aim to preserve a stable free cash flow profile and remain committed to doing whatever is necessary to protect our balance sheet in the weeks and months ahead.

“Parsley is focused on maintaining value for the long term; this requires short term responses when posed with external attacks and shocks. We will focus on our rigorous project returns process and will not destroy capital if the commodities tape does not support sufficient returns. This approach worked in the 2015-2016 timeframe and will best position us again to emerge from this volatile time on our front foot ready to fight.”

The Austin, TX-based E&P during January and February was running on average 15 rigs and five fracture spreads, but it already has dropped to three spreads and will cut three rigs “as soon as practicable. Parsley plans to further reduce its activity pace in the near-term.”

Parsley management had expected to generate free cash flow of at least $200 million this year at a $50 WTI price. “In the context of $30-35 WTI oil prices for the remainder of the year, the company would target at least $85 million of free cash flow, accomplished through incremental activity reductions, likely in combination with lower service and equipment costs. In a lower oil price environment, Parsley will adjust as needed to preserve its balance sheet.”

Likewise, Ring is taking a step back to consider its options, said CEO Kelly Hoffman.

“The recent drop in the price of oil has forced us, as well as other operators, to re-evaluate our current capex budget for 2020 and make changes accordingly that we believe are in the best interest of the company and its shareholders,” he said.

Ring, another Permian pure-play, plans to “cease any further drilling until pricing stabilizes. Our preliminary capex for 2020 included the drilling of 18 new horizontal wells on our Northwest Shelf asset. Of the 18 new wells, four were to be drilled in the first quarter of 2020. Those four new wells have been drilled, but as of now, no further new drilling will take place until we are comfortable that commodity pricing has stabilized.

“The company is not obligated to, or under any contractual commitments for drilling or completion work,” Hoffman said. “We will continue to have capital expenditures in the areas of infrastructure upgrades and improvements which we believe are necessary to maintain current production.”

Regarding debt, Ring management is “very aware and sensitive to our balance sheet and our ongoing ability to service our current debt in this uncertain market.” The company continues to have “serious discussions” regarding the potential sale of the Permian Delaware assets, “and by curtailing any future new drilling, we are freeing up future cash flow which could be used for debt reduction.

“These are uncertain times and we firmly believe the decisions being made today will have a dramatic impact on the future of our company,” Hoffman said. “The previously announced capex for 2020 is being reviewed by management. We are hopeful this volatility and uncertainty will be short-lived but must be prepared if it persists.”

“In response to the effects on global demand from the coronavirus and proposed global supply increases, we are immediately reducing our capital investment to a level that maintains our operations in a safe and responsible manner,” Stevens said. “We have experienced this type of price drop previously and will implement our low-price playbook, just as we did in 2016…We believe these events are transitory in nature and have high confidence in the revenue generating potential of our low-decline assets.”

For now, CRC has ceased investing in internally funded field development and growth projects “until the company sees a higher degree of market clarity,” management said. “The company was already on pace to invest less than $35 million of internally funded capex in 1Q2020.

Moody’s Investors Service said the swift decline in oil prices “will severely stress the E&P sector on top of its limited access to capital and high refinancing requirements in 2020-21. The culmination of supply and demand shocks will force producers to take drastic action on costs and make further reductions in capital spending to cope with the difficult price environment in 2020.”

E&Ps “with little or no hedge protection or high cost structures will suffer the deepest erosion in cash flow and liquidity,” Moody’s credit analysts said in a note Tuesday.

Companies rated by Moody’s as “B1” or lower, those burdened by high debt and operators needing external funding “will be most vulnerable to the dislocations in capital markets that may linger over several months, if not quarters,” according to the Moody’s team.

Moody’s also anticipates operators with the “strongest” balance sheets to prowl for merger and acquisition opportunities.

In addition, the Moody’s analysts said the oilfield services sector is going to take a hit too from the reduced oil price and spread of coronavirus because of supply chain disruptions, weakened demand for services and tighter capital markets.