Denver-based Ovintiv Inc., whose onshore oil and gas portfolio stretches from Canada to Texas, could face a board shakeup if performance does not improve, shareholder Kimmeridge Energy Management Co. LLC warned on Thursday. 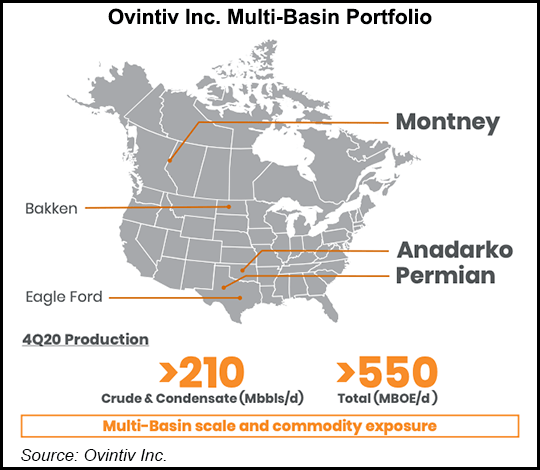 The private equity, which has a 2.4% stake in the exploration and production (E&P) company, has launched a website and sent a detailed 18-page presentation to Ovintiv management addressing its concerns.

“As a long-standing investor in the E&P sector, I have witnessed the continued deterioration of investor sentiment toward Ovintiv,” said Kimmeridge managing partner Mark Viviano. “Given the quality of its asset base, this company should not have been one of the worst performing E&Ps over the past seven years.

“However, Ovintiv is emblematic of everything that is wrong with the U.S. shale industry, and the reasons for underperformance are clear,” as “unchecked decision-making, overseen by a board with insignificant equity ownership and inadequate expertise, is a prescription for failure.”

Kimmeridge has attempted to “engage in a constructive dialogue with the board,” Viviano said, but “we repeatedly encountered an unreceptive board that mistakenly believes it has already positioned Ovintiv as a leading E&P company, but the facts suggest otherwise. We believe shareholders deserve better and will be supportive of change.”

In response, Ovintiv CEO Doug Suttles said the board and management team are “focused on sustainable value creation for its investors. We have a clearly defined plan to reduce debt through driving efficiency gains and disciplined capital allocation to generate free cash flow.

“The company has generated significant free cash for each of the last three years and enters 2021 with strong momentum.”
For example, Suttles said, Ovintiv earlier this month pre-announced its 4Q2020 results. He noted that debt reduction was “ahead of schedule, capital investments below guidance,” and the company achieved “stronger than expected production. Ovintiv also recently completed its annual shareholder outreach program, where members of the board meet directly with its largest shareholders.”

According to Kimmeridge, the E&P sector overall needs to “embrace a new business model.” The investor said E&Ps need to focus on returning capital to shareholders and lowering reinvestment rates. It also is advising the sector to reduce absolute debt, align management compensation with shareholder interests and establish “credible” environmental targets aligned with the United Nations global climate accord.

Kimmeridge, whose investments are centered in North America’s onshore basins, said there are “three main failures” at Ovintiv regarding capital allocation, governance and environmental stewardship.

“Ovintiv management appears addicted to taking on debt, demonstrated by a history of acquiring companies at the wrong time for the wrong price,” Kimmeridge stated. “We believe their mistakes are compounded by allocating capital to the wrong areas.”

Management also “has not been held accountable. We believe the company’s compensation structure displays a troubling lack of alignment between pay and performance, compounded by the lowest insider ownership amongst U.S. peers.”
In addition, Ovintiv has “one of the highest” carbon dioxide equivalent, or CO2e, intensities in its U.S. peer group, according to the firm. With “no targets related to flaring or total emissions intensity, Ovintiv is an environmental laggard, not a leader,” it said.

“The combination of poor capital allocation, misaligned incentives and an inferior environmental strategy leaves the company unprepared for the growing risks associated with the energy transition,” Viviano said. “More concerning is the degree of complacency around the need for meaningful reform. The magnitude of shareholder value destruction demands a sense of urgency we have yet to witness from the Board and management team. Kimmeridge is prepared to help drive the change that the company desperately needs by nominating directors to the Ovintiv board at the upcoming annual meeting.”