The outlook for Appalachian producers continues to deteriorate as the lid on natural gas prices shows no signs of budging, which is testing the strategy of operators throughout the basin. 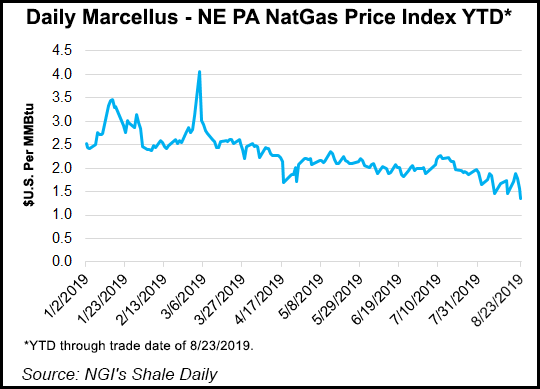 Oil and gas producers across the country are being faced with tough decisions. Commodity prices are volatile, takeaway is limited in some parts of the Lower 48 and broader fears of a recession are roiling the industry. Producers in Appalachia have been particularly hard hit as surging gas supplies have far outpaced demand, and the region remains isolated from longer-term growth drivers along the Gulf Coast.

“Gas prices are horrible, and there’s no visibility on them improving,” one analyst told NGI, who asked for anonymity. “There’s just too much supply, too much associated gas, economics are marginal, and a lot of these companies are broken and have too much debt.”

A review of the basin’s leading public operators shows that their values have eroded in recent years, with market capitalizations at or well below $2 billion. With the exception of Cabot Oil and Gas Corp. and EQT Corp. — the nation’s largest gas producer — the basin’s leading operators have shares that are trading at only a few dollars each. Another analysis, released last month by BTU Analytics LLC, showed that at least six Appalachian producers have seen their market value plunge by more than 50% since 2017.

According to BTU, slowing growth in the region and a lack of positive free cash flow (FCF) is partly to blame. For much of the unconventional drilling era, the stock of gas companies traded at high multiples because of extraordinary growth. Investors now expect exploration and production (E&P) companies to deliver a positive return on invested capital, and to return cash to shareholders via stock buybacks and/or by establishing a sustainable dividend.

In order to generate more FCF and address base declines, however, E&Ps must produce more, which the market is frowning upon as a flood of supplies have kept prices hovering around $3.00, or far lower, for years now.

“We continue to expect pressure on the forward curve through the end of 2019 and need greater industry buy-in on maintenance capital,” said analysts with Tudor, Pickering, Holt & Co. in a recent note to clients. Production declines are necessary “before taking a more constructive stance” on gas equities.

“Many investors want publicly traded E&Ps to establish a dividend, which companies in general cannot do if they are not FCF positive,” said NGI’s Patrick Rau, director of strategy and research. “But they also want those companies to grow that dividend over time, which means the producers need to grow FCF. Given the volatile commodity price environment, that’s difficult to do without some kind of growth in production.”

Gas producers, it would seem, are locked in a vicious cycle. They’re producing more to generate FCF, or in some cases, to service debt payments and keep leverage ratios in check, at a time when the market is oversupplied. But doing that at current prices could hurt their returns on invested capital, depressing stock prices and further undermining their already diminished ability to raise money. Furthermore, producers like Antero Resources Corp. are guiding for strong production growth next year to fill costly firm transportation commitments signed years ago.

In a sense then, the demands of investors are almost implausible for some operators without drastic changes. More asset sales could be ahead in the Northeast. Both Gulfport Energy Corp. and Range Resources Corp. announced a series of smaller sales in recent quarters as they scrambled to bring more cash onto their balance sheets, including overriding royalty interests, noncore properties and smaller stakes in other companies.

If stocks continue falling, more companies could also be forced to restructure. Energy sector bankruptcies have been on the rise this year.

For now, Appalachian operators overall have announced plans to cut spending this year and next. After the second quarter, however, many continued to guide for either increased production in 2019 or moderate growth in 2020. Gulfport has, so far, been the only operator to keep this year’s production levels flat with 2018, which hasn’t won over investors.

Most Appalachian producers are forecasting single-digit growth next year instead of the robust double-digit growth that has characterized the basin for years now. Those production cuts may or may not be enough to satisfy apathetic investors.

“That’s a tough one,” said BTU analyst Anna Lenzmeier. “Obviously prices are really low; a lot of producers were talking more about hedging. They’re having to choose between locking in potentially lower prices or accepting a lot of volatility this year and next. There’s a choice to be made there, and it remains to be seen which one is the better one.”

Appalachian E&Ps also seemed intently focused on discussing well costs during their second quarter earnings calls, bent on lowering per foot expenses as a way to better manage costs. But they might have to go far beyond efficiencies to adapt in a rapidly changing market.

“To win in the era of cash, independents across the unconventional sector will need to overhaul their strategies and operations across the board,” McKinsey & Co. researchers wrote in a report earlier this month on the shifting landscape facing the upstream sector. While capital efficiency remains important, the firm said development planning must be better, base production can no longer be ignored, corporate functions must be reexamined and portfolios rebalanced in the quest to change growth-at-all-costs strategies.

Under a new management team that took over in July after a nine-month proxy fight, EQT CEO Toby Rice is aiming to do that: completely overhaul the company’s operations. High-cost well pads are being pulled from the queue. The new team intends to focus primarily on land and permitting to establish a more streamlined operational plan they’re calling “combo development.”

The strategy is aimed at lowering well costs, driving FCF and smoothing out other operational issues such as midstream constraints. It would also be supported by technological innovations that go beyond the drill bit. Management plans to issue updated guidance in the coming months.

“The equity in gas markets is sending a clear message to operators to cut growth to maintenance levels and some will need to go further than that,” said EQT executive Kyle Derham, who is helping to oversee the transition. He discussed the outlook during the second quarter earnings call. “While we have started to see a pullback in activity, we believe more is needed to balance the market.”

Such changes are likely to be executed during another tough commodity cycle. Natural gas saw some of its lowest prices in three years last month, when benchmark prices averaged $2.37/MMBtu. Forward prices have continued to slide and the market could again flirt with the $2.00 barrier soon.

“The call for molecules from gas producers is less and less, especially as we have delays in LNG facilities and delays in pipelines to Mexico, those are big drivers of demand growth,” Hoza told NGI. “If you keep kicking that can down the road, all these producers are going to keep feeling the pain.”

To be sure, Appalachian executives indicated during second quarter earnings calls that they understand the expectations their companies face. If the macro environment continues to deteriorate, spending and activity likely would be reduced further.

If that happens, it could lead to further retrenchment in oilfield services and dent the midstream sector’s operations. Williams has already said that its volume growth in the Northeast is likely to slide from double to single digits between this year and next as the signs of a downturn come together.

If oil prices slide further, that might help tamp some of the associated gas volumes flowing in places like the Permian Basin, which increased this month as the Gulf Coast Express pipeline ramped-up operations. The longer-term outlook, however, still remains grim.

In the offing are more than 20 announced projects totaling roughly 35 Bcf/d planned for the second wave of LNG exports. A question mark remains as to how much of that capacity eventually comes online, especially as the U.S. trade war with China escalates. But for Appalachian producers, even if the facilities are built, tapping those markets and petrochemical expansions along the Gulf Coast could be somewhat difficult given the midstream constraints that would arise, Hoza said.

“It’s a rough market right now,” he added. “With the technology that producers have brought online, they are their own worst enemy. They got so good at producing gas at such a low cost that prices are stuck.”