Members of the outgoing administration of President Trump have sent a letter to Mexican counterparts, including Energy Minister Rocío Nahle, admonishing regulatory changes they said are damaging Mexico’s investment climate. 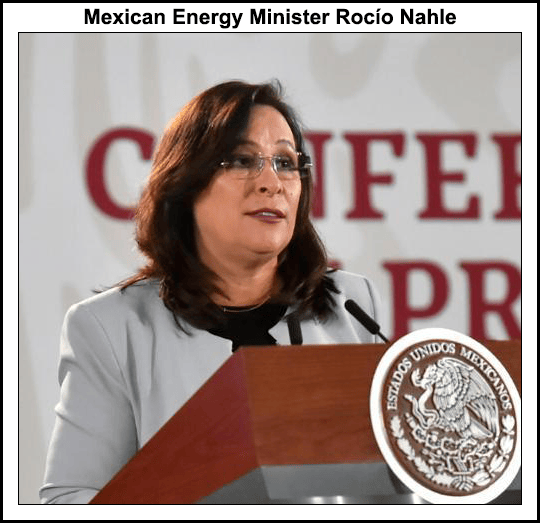 “In addition to harming several U.S.-backed private sector projects across the energy sector, these measures could adversely affect hundreds of millions of dollars of U.S. government public energy investments in Mexico made through the U.S. International Development Finance Corp., the Export-Import Bank of the United States and U.S. and Mexican public investments via the North American Development Bank,” the letter said.

The changes could also violate Mexico’s obligations as outlined in the United States-Mexico-Canada-Agreement, or USMCA.

Last June, U.S. officials were warned by American Petroleum Institute (API) President Mike Sommers of regulatory moves in the Mexican energy sector that were “inconstantly applied or inconsistent with past practice.”

Montserrat Ramiro, commissioner for regulator Comisión Reguladora de Energia (CRE) from 2015-2019 who resigned amid the changes, suggested that the Mexican president is following through on his campaign promises.

“This administration has an objective, whether or not we understand it as rational, to strengthen the state-owned companies in a way that is neither financial nor operational,” she told NGI’s Mexico GPI. “What they truly think is that the market shouldn’t exist; that the energy sector shouldn’t be open to competition; and that the state companies should be the sole providers of service.”

Cofece has proven to be one of the few effective counterweights against López Obrador’s more controversial energy policies.

The letter from the U.S. officials “could have been sent a year ago, because nothing has really changed between a year ago and now,” Ramiro said. “The problem is that I think everybody, including some people from the U.S. policy side, thought that the economic rationality of closing the energy sector wasn’t a real possibility. What this letter proves is that, finally, and maybe a day late and a dollar short, they are realizing that the current policy doesn’t think in terms of economic rationality.”

According to the president of the Energy Cluster of Nuevo León trade group, Cesar Cadena, the new permitting rules on imports and exports of hydrocarbons shut out Mexican companies from the market, leaving only Pemex and those U.S. firms that have already secured long-term permits as players.

“Legally, there is very little we can do,” he said at the virtual 6th Mexico Infrastructure Projects Forum on Tuesday. He said decisions on permits in the energy sector now rest with Energy Ministry Sener, and it bases its reasoning on notions of energy sovereignty and “energy balance.”

Permitting in the energy sector had already been slowed by the coronavirus, with Sener closed to business since March. This week, CRE also said it was suspending activities because of health risks associated with the coronavirus.

“Legal appeals take time,” Cadena said. However, “before, if you asked for a permit, and the response time was slow, it was automatically given. Now if the authority doesn’t respond to you, it’s automatically a no.”