Oregon’s two U.S. senators on Thursday asked the head of the National Transportation Safety Board (NTSB) why a federal investigative team was not dispatched last weekend to the scene of an oil tanker train derailment in their state near the Columbia River Gorge. 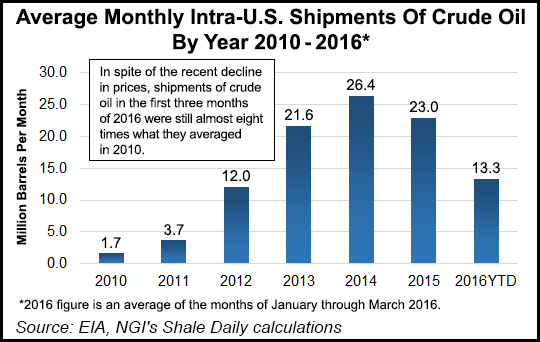 Sens. Jeff Merkley (D-OR) and Ron Wyden (D-OR) said they were troubled by the federal agency’s lack of involvement in the aftermath of 16 of 96 Union Pacific Railroad (UP) crude-hauling tank cars spilling oil and igniting in fires near Mosier, OR. No one was hurt, but the clean up continues this week.

Merkley and Wyden laid out their concerns in a four-page letter to Christopher Hart, NTSB chairman, contending that federal law requires that NTSB “investigate or have investigated” a railroad incident in which there is a death or substantial property damage. There are also a number of other criteria under which NTSB can inject itself into an investigation, according to the senators.

The accident site is being cleared of oil spillage and the tank cars, all of which are older C-1232 models, while community concerns and a wastewater treatment plant sewage pipeline damaged in the incident are both being resolved separately, a Sacramento, CA-based UP spokesperson told NGI’s Shale Daily. The incident caused a lot of local consternation, although none of the people in the town of 440 were directly impacted by the incident (see Shale Daily, June 7).

“It should go without saying that crude-by-rail accidents, and others involving unit trains transporting Class 3 flammable liquids, are ‘problems of a recurring character,'” Merkley and Wyden told Hart. “In response to a letter we sent on [two years ago], you provided information showing there had been 16 ‘significant crude oil and ethanol accidents’ between October 2006 and February 2014.”

The senators pointed out that the oil train derailment on June 3 caused closure for a time of the Interstate 84 highway, a major transportation corridor running parallel to the railroad tracks south of the Columbia River. This was all within a one-mile evacuation zone, which also included a school with 200 children. “Oil from the wreck leaked into a sewer treatment plant, forcing its closure,” the senators said.

Their letter to Hart ended with a long list of questions seeking more specifics from the ongoing investigation. They asked for a response from the NTSB by July 5. In the meantime, UP plans to finish its preliminary investigation this week and submit a report to the Federal Railroad Administration; it had no comments about the NTSB’s role or lack of a role in the incident.

A UP spokesperson at the scene Friday said the company was preparing for a community update meeting later that night and planned to wrap up remediation work this week. “All the oil has been removed or collected, and soil remediation is still ongoing,” he said. Train traffic that resumed on the June 5 continues to be limited to 10 mph in the area.

Incidents like the Oregon oil tanker train derailment are more common than they once were, likely due to the overall rise of crude-by-rail shipments in recent years. Shipments of crude oil by rail have grown exponentially, mostly due to the fact that more U.S. crude is being produced in places like the Bakken Shale in North Dakota, where it must travel long distances to reach major market centers. Despite the recent decline in prices, shipments of crude oil in the first three months of 2016 were still almost eight times what they averaged in 2010.