After being idled in April, oil and gas producers working in Argentina got back to work in May, according to press reports based on information from services company NCS Multistage. 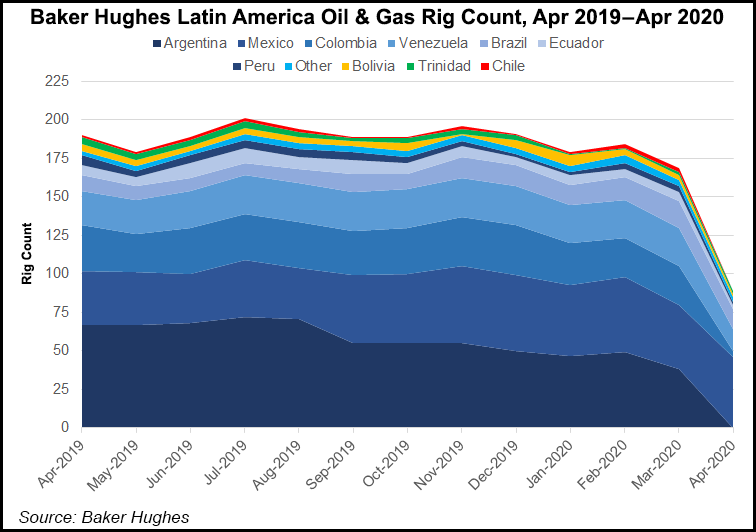 There were 28 hydraulic fracturing (fracking) stages completed in Argentina in May, compared to zero in April, when the country reported no active drilling rigs. Argentina has had one of the strictest lockdowns globally in response to the coronavirus, which has led to a drastic slowing in its economy.

In 2019, the country, led by its Vaca Muerta shale formation in Western Argentina, saw an average of 700 frack stages per month.

In response to the demand destruction, the government has instituted a $45/bbl price floor for producers to try to motivate new exploration and production. It’s expected that new laws on gas pricing will ensue.

In an online interview in May, the head of state-owned YPF, Guillermo Nielsen, said the principal problem in Argentina is when demand will return. “Looking at China, demand is picking up, and faster than we thought. But I don’t know for Argentina. I hope for the best.”

He said the integrated oil and gas company suffers from high levels of debt and is strangled by not being able to seek outside investment given the current debt negotiations ongoing at the state level.

As for the new price regulation, or the ”barril criollo,’ Nielsen said the final version of the decree “was more down to earth and better than some of the drafts that were published in the press.”

The problem, he said, is that given the current crisis, there simply is no crude storage capacity left in Argentina, which is squeezing in particular independent operators.

“We don’t know the speed of recovery, but the way things look today we can forget about YPF purchasing from third parties until the end of the year.”

Nielsen said Vaca Muerta remains a world class deposit where “there are areas, and we have the largest concessions, that are extremely productive and where the quality of the rock is absolutely first class. And we have been able to really gather a very good knowledge of how to produce in Vaca Muerta with a very high level of productivity.”

While plans to export liquefied natural gas are probably dead for now, natural exports from Vaca Muerta to neighboring countries through pipelines remains part of the business plan and could include a new pipeline to Brazil.

“The deregulation of the Brazilian market is something we are looking at closely and this is a very important market for us,” Nielsen said.