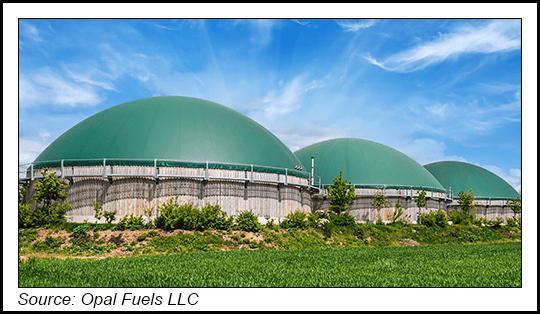 Opal, which aims to grow production volumes to more than 125 million gasoline gallon equivalents (GGE) in 2024, from 13 million GGE this year, announced a 50/50 JV with GFL Renewables LLC, an affiliate of GFL Environmental Inc.

The JV agreement includes plans to develop, construct and operate two RNG production facilities that would capture methane emissions from landfill facilities owned and operated by GFL. The emissions then would be converted into renewable energy for use as fuel for heavy-duty trucking fleets, the companies said.

“This is truly a win-win scenario as we are able to close the loop on methane emissions from GFL’s landfill facilities” and use RNG “to replace diesel,” said Opal Co-CEO Adam Comora. “We look forward to other potential development opportunities with GFL to assist them in unlocking value within their business and advancing their sustainability goals.”

The first of the new Opal projects announced Tuesday, located in Michigan, is expected to produce 2 million MMBtu/year of pipeline RNG. This project, one of the largest of its kind in the country based on volume of landfill gas, is expected to begin commercial operations in early 2023, Opal said.

The second project, in North Carolina, is expected to produce more than 1 million MMBtu/year of RNG, with anticipated commercial operations beginning in mid-2023.

Opal currently operates an RNG facility at a GFL landfill site in Pennsylvania that produces about 890,000 MMBtu/year.

Opal also has set a target of expanding its footprint of RNG fuel stations at a compound annual growth rate of 28% between late this year and 2024. This would grow the company’s estimated year-end 2021 footprint of 95 stations to 256 over about three years.

Amp Americas, which converts dairy waste into carbon-negative renewable transportation fuel and power, announced Tuesday a pair of acquisitions to drive the expansion of its RNG and electricity assets portfolio.

The company is expanding its partnership with Generate Capital by consolidating Generate’s Indiana dairy RNG project assets into the RNG portfolio. Generate also agreed to invest in the corporate equity of Amp, the companies said.

Amp began developing the Indiana assets in 2012 and has operated and managed them on behalf of Generate since June 2019. The Indiana project consists of five digesters and two gas processing plants that capture methane from about 1.5 million gallons/day of waste generated by 36,000 cows across nine dairies. The plants then purify and compress the methane into renewable transportation fuel.

Amp on Tuesday also said it acquired a group of RNG project assets in Idaho from Vitol Green Holdings LLC, an affiliate of Vitol Group. The Idaho projects consist of three digesters at two gas processing plants and one electric power generation plant. The projects capture methane from more than 940,000 gallons of waste/day generated by 36,000 cows across three dairies.

Amp said it now operates seven of the largest dairy biogas-to-transportation fuel projects in the United States and is currently producing fuel from dairy waste generated by more than 100,000 cows across 20 dairies.

“We have an agile structure and proven ability to finance, build, own, operate, market, and deliver renewable energy projects — all under one roof,” said Amp CEO Grant Zimmerman. “We believe the strength of these acquisitions, combined with our existing asset portfolio, will enable us to continue to make meaningful contributions to the decarbonization of the transportation and agriculture sectors.”