A Canadian energy entrepreneur on Thursday unveiled plans to build an underground transmission project linking natural gas and renewable energy resources in Ontario (ON) to Pennsylvania. 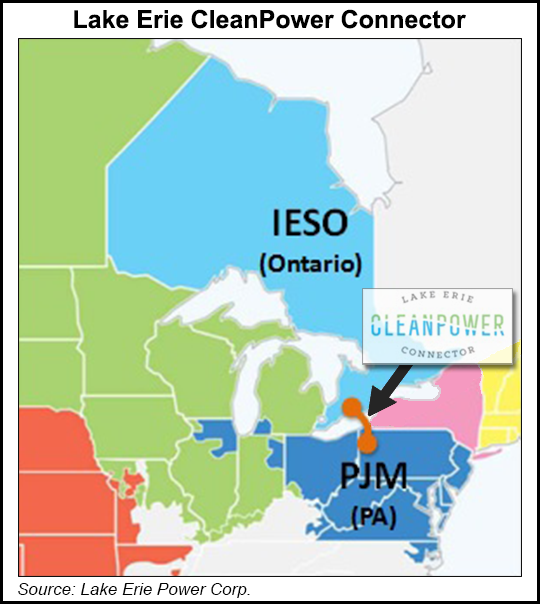 The Lake Erie CleanPower Connector would bring excess natural gas, hydroelectric, wind, solar and nuclear energy to the PJM grid, which supplies electricity to 13 states and the District of Columbia, according to Lake Erie Power Corp. (LEPC) CEO John Douglas, who previously has led financing for North American energy projects.

The estimated $1 billion line would take three years to build, with commissioning targeted for the end of 2017 depending on regulatory approvals. Construction would provide about 1,500 direct and indirect jobs. Douglas also promised there would be no investments required by Canadian or Pennsylvania taxpayers.

“This new inter-tie between Canada and the United States will serve to connect the surplus clean electricity generation in the north to the growing demand in the United States,” Douglas said. “The privately financed project will significantly improve grid stability and reliability in northern Pennsylvania.”

According to a filing with the Federal Energy Regulatory Commission, LEPC is seeking the right to sell transmission rights at negotiated rates. To complete the connector, two solid, six-inch high voltage, direct current transmission cables would be built underwater from Nanticoke, ON to Erie County, PA.

The first proposed route would involve burying transmission lines in Lake Erie for about 49 miles “before traveling northeast of Presque Isle State Park and transitioning to land in Lawrence Park Township in Erie County.” The remaining route would follow an existing right of way for about 10 miles to a proposed converter station adjacent to an existing substation, the filing said.

A second proposal involves burying the lines for about 60 miles to Girard Township, PA, then be routed over about seven miles primarily along an abandoned railroad right of way, before ending at the proposed site of a new converter station.

“The final route is subject to ongoing evaluations and analysis,” LEPC’s filing said.

Douglas acknowledged that the project is preliminary but he’s counting on continued surplus power generated in Ontario. The proposed line from Ontario would bypass Michigan and New York connections, often congested and unavailable during peak hours, he said.

“What we are offering is a direct link into probably the largest, most liquid, energy market in the United States today.” Ontario’s generators “can avoid the congestion and curtailment that currently exists.” That means Ontario’s operators could reap higher prices for the surplus power.

“We have a preferred route,” Douglas said. “We need to complete our due diligence and continue to get feedback from state and federal agencies and meet with stakeholders” to confirm whether the proposal is feasible.

Low-impact water jet technology would used to place the cable in a temporary trench “barely wider than the six-inch cable itself,” that would be filled. The technology isn’t new, said Douglas, who claimed there were a “dozen similar projects installed in North America and over two hundred worldwide.”

To meet the 2017 target, the project would require all of the customary approvals by 2015. LEPC is holding a series of meetings with regulators and stakeholders, including environmental groups and area residents.

“This project is a good fit for both regions,” said Power Advisory LLC Managing Director Jason Chee-Aloy. “Ontario has produced surplus clean energy over the past five years, and PJM has a need. The Lake Erie CleanPower Connector will benefit both markets.” Power Advisory specializes in power market analysis.

“The principals at Lake Erie Power are proven developers with a track record for successfully conducting meaningful and responsible community outreach,” said Erie County Executive Barry Grossman. “Jobs and improving energy reliability and stability are vital ingredients to supporting sustainable community and regional growth. Not only will the project be entirely financed through private investment, it will provide new tax revenues the county can use to help support the services we provide to our residents.”

Erie County’s John Elliott, who heads the Economic Development Corporation, said diversifying the area’s energy portfolio “is something many regions talk about but never truly realize. The Lake Erie CleanPower Connector provides us the opportunity to do just that. This advantage will help in our ongoing efforts to attract new businesses to Erie County.”

The main financial backer for the Lake Erie line is privately held JCM Capital, based in Toronto, which has invested to date mostly in solar power projects.

Transmission Developers Inc., another Douglas project, was formed to build an underground transmission line under Lake Champlain and the Hudson River, carrying power from Montreal to New York City. That company was sold in 2010 to Blackstone Group LLC, which is planning to begin constructing the line in 2014.

LEPC already has applied for the right to transmit the power with FERC, Douglas said. The project also is being discussed with the National Energy Board and provincial authorities in Ontario.