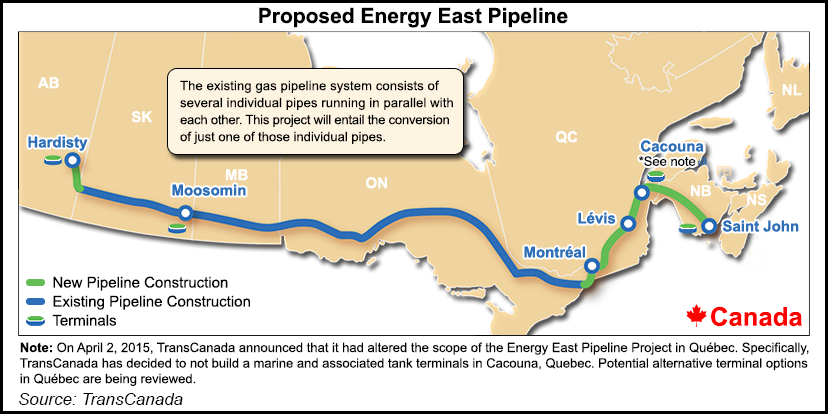 A week after all 13 provincial and territorial premiers agreed on a Canadian Energy Strategy that encourages development of new trade routes (see Daily GPI, July 20), the Ontario and Quebec governments joined a protest against costs of the biggest current proposal.

The Ontario and Quebec energy ministries backed a request by Enbridge Gas Distribution Inc. and Union Gas Ltd. (Spectra) for the National Energy Board (NEB) to order TransCanada Corp. to stop trying to make them pay for its Energy East oil export plan.

Forecast costs of the mammoth scheme add up to C$13.5 billion (US$12 billion): and C$12 billion (US$10.7 billion) for partial conversion of TransCanada’s natural gas Mainline to carry 1.1 million bbl of Alberta oil per day to an east coast tanker terminal, plus C$1.5 billion (US$1.2 billion) to build a new gas Eastern Mainline for Ontario and Quebec.

In an NEB filing the Ontario ministry insists, “In no way should any or all of the additional costs and related terms and conditions of the Energy East and Eastern Mainline proposals be allowed to impact customers without the requisite hearing and approval by the board.”

The Quebec ministry says TransCanada must structure the projects to ensure that natural gas shippers do not wind up cross-subsidizing oil deliveries.

Enbridge and Union say TransCanada has inserted up to C$600 million (US$480 million) of liabilities for development costs of the new oil export path into contracts for new gas service beginning in 2016 and 2017.

The pipeline company is behaving as if Energy East has been approved as proposed even before its regulatory review begins, say the gas distribution companies. The NEB has yet to accept the project application as complete, a step that triggers a federally legislated 15-month deadline for review and approval.

The distribution companies’ complaint highlights a hotly contested aspect of TransCanada’s grand design: how much of the proposed Eastern Mainline is entirely new gas capacity that customers should pay for, as opposed to how much is just replacement for delivery space lost to the Energy East conversion and whether that should be charged entirely to oil shippers.

TransCanada and supporters of its proposed oil export conduit have yet to reply to the extra billing complaint and were studying next steps. After hearing from all sides, the NEB has promised to establish a process for dealing with the complicated conflict.

The new Canadian Energy Strategy provides no clear guidance to the federal agency. The Conservative government in Ottawa played no role in devising the program.

The 40-page document only recites goals and principles. On pipelines, apart from encouraging market diversification beyond the United States, the strategy does not name favored projects or deal with costs. Further work is promised on identifying requirements and ways to collaborate on fulfilling them.