Gains in land drilling offset a decline in the Gulf of Mexico (GOM) to send the U.S. natural gas rig count two units higher to 455 for the week ended Friday (May 21), according to the latest numbers from Baker Hughes Co. (BKR). 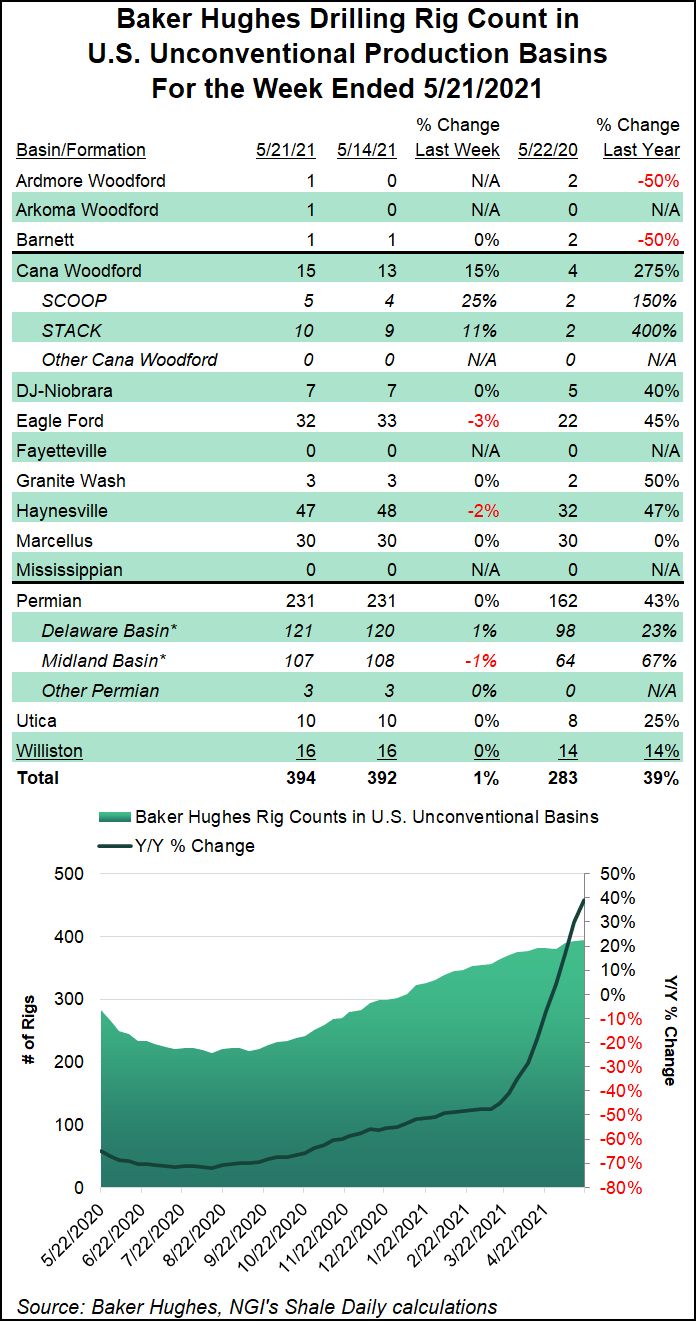 Four oil-directed rigs were added in the United States for the week, while one natural gas-directed rig and one miscellaneous rig departed, according to the BKR numbers, which are based in part on data from Enverus. The combined 455 active U.S. rigs as of Friday compares with 318 rigs running in the year-ago period.

Land drilling increased by three rigs domestically, while the GOM saw its total fall one unit to 14, versus 12 a year ago. Two horizontal units were added overall, while the total number of directional and vertical rigs remained unchanged.

The Canadian rig count fell one unit to 58, up from 21 a year ago. One natural gas rig exited there during the week, while oil-directed drilling activity levels remained unchanged.

Broken down by play, the Cana Woodford saw a two-rig increase for the week, bringing its total to 15 rigs, up from four at this time last year. The Ardmore Woodford and Arkoma Woodford each added one rig, while the Eagle Ford and Haynesville shales each dropped one rig from their respective totals, according to BKR.

Broken down by state, Oklahoma saw a net gain of four rigs to rise to 26 overall, more than double the 12 rigs running there in the year-ago period. New Mexico added two rigs overall, while Louisiana and Texas each saw a net decline of two rigs for the period, according to BKR data.

Driven by the Permian Basin, oil production out of seven key U.S. onshore regions is set to grow from May to June, while natural gas production is on track to decline, according to projections published earlier in the week by the Energy Information Administration (EIA).

Natural gas production from the seven regions — the Anadarko, Appalachia and Permian basins, as well as the Bakken, Eagle Ford, Haynesville and Niobrara shales — is expected to total 83.571 Bcf/d in June, down 53 MMcf/d from 83.624 Bcf/d produced in May.

The overall backlog of drilled but uncompleted (DUC) wells across the seven regions declined by 241 to 6,857 from March to April, according to the agency. The Permian, with the largest backlog to begin with, posted the largest month/month decline, lowering its DUC total by 121 to 2,932.