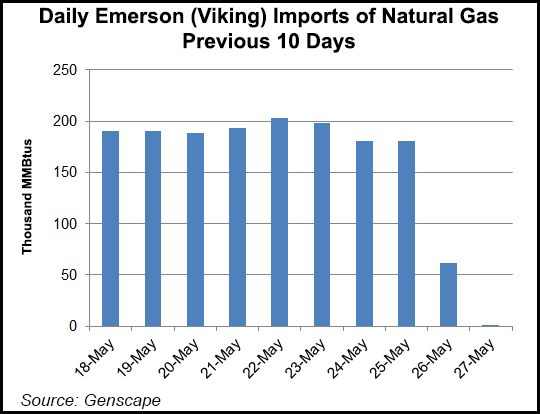 No injuries were reported, and Viking said in a bulletin it was working on a recovery plan early Tuesday.

There was an explosion and fire with flames leaping more than 100 feet in the air, according to local news reports early Monday morning. A 15-foot deep crater was left by the force of the rupture. Six or seven families living within two miles of the rupture were evacuated.

Approximately 900 customers are affected, a Oneok spokesperson told NGI early Tuesday. “Our contractor is on site, and we have submitted our repair plan to the appropriate regulatory agencies. Repair completion and restart of the pipeline cannot be determined at this time, but we hope to receive regulatory approval soon,” said the spokesperson. The cause is under investigation.

The incident occurred in the far northwest corner of Minnesota near where Viking begins at an intersection with TransCanada Corp. in Manitoba, Canada near the U.S.-Canadian border. Service to the towns of Argyle, Warren and Thief River Falls, MN, was hoped to be restored by Wednesday.

“At this time the affected line segment has been isolated and Viking is posting zero capacity for flow through this segment [between Valves 2203 and 2204],” Viking’s bulletin on its website said early Tuesday.

Viking transports Canadian gas from a point near Emerson, Manitoba south and southeast through Minnesota and into central Wisconsin where it terminates at a connection with TransCanada’s ANR Pipeline at Marshfield, WI.

“An assessment of the damage to Viking facilities is ongoing and a repair plan is being developed,” the pipeline’s bulletin said. “Viking will provide additional information as soon as it becomes available.

“[We have] experienced a mainline pipe rupture that will not allow gas to flow from Emerson to any point south of block Valve 2204 on the north end of the system. Shippers are being asked to make their nominations at points south of the outage which includes this point.”