Energy Transfer LP on Thursday shut in a 0.2 Bcf/d capacity, 24-inch diameter natural gas transmission line, which moves supply from the Permian Basin, after a fire was reported before noon in a rural area of Fort Bend County, near Houston. 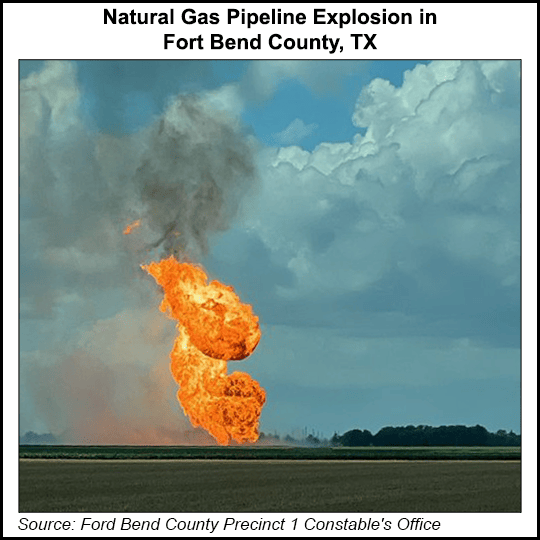 A company spokesperson confirmed to NGI that the fire occurred around 11:15 a.m. CT, prompting the company, which operates the system, to isolate the section and allow the blaze to burn out.

The fire on the 240-mile-long Old Ocean system occurred on the section between Maypearl and Sweeny, the spokesperson said. Local emergency responders confirmed the fire was extinguished around 12:30 p.m. No injuries were reported.

Old Ocean, shuttered from 2012 to 2018, was reopened under a 50/50 joint venture between Energy Transfer and Enterprise Products Partners LP. The system initially was designed to carry Barnett Shale gas volumes.

The partners reopened and expanded Old Ocean to move more supply from the Permian to the Texas coast through their jointly owned North Texas Pipeline.

Energy Transfer confirmed an investigation would be conducted and updates on the pipeline’s status would be released as information became available. The incident investigation falls under the jurisdiction of the Railroad Commission of Texas.