Oklahoma Gov. Mary Fallin on Thursday approved the transfer of nearly $1.4 million from the state’s emergency fund to the Oklahoma Corporation Commission (OCC) and the Oklahoma Geological Survey (OGS) to support their earthquake research efforts. 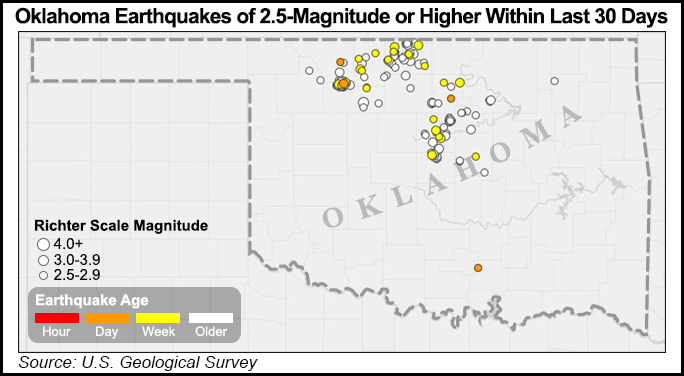 The governor’s office said Fallin had recently asked the OCC and the Coordinating Council on Seismic Activity — a panel the governor formed in September 2014 (see Shale Daily, Sept. 8, 2014) — to determine what resources were needed by state government agencies to conduct their seismic research. The groups responded by presenting Fallin with a list of one-time costs totaling $1.387 million.

“I immediately made arrangements for the OCC and OGS to receive the money necessary to meet those needs,” Fallin said. “I’m committed to funding seismic research, bringing on line advanced technology and more staff to fully support our regulators as they take meaningful action on earthquakes.”

Most of the money being transferred, $1 million, will go to the OGS, which plans to use the funds to install additional permanent seismic monitoring stations, update its seismic monitoring network and software, and hold workshops to share research results and identify areas that need additional study.

According to Fallin’s office, the OGS will also “analyze the response of seismicity to regulatory and market forces driving changes in produced water injection,” and “characterize the properties of the Arbuckle Formation and basement rock in a complex fluid reservoir.” Both are integral to the state’s efforts to rein in induced seismic activity, which the OGS has attributed to wastewater injection wells targeting the Arbuckle, which closely overlies the crystalline basement (see Shale Daily, April 22, 2015; April 2, 2015).

“We are very excited to have this funding,” OGS Director Jeremy Boak told NGI’s Shale Daily on Friday. “[It] will enable us to develop a clearer picture of the causes and impacts of induced seismicity in Oklahoma by enhancing our seismic network, analyzing our growing catalog of earthquake data, understanding the interaction of the Arbuckle Group with the basement rocks where earthquakes are happening, and building valuable interactions with other investigators in Oklahoma, as well as with citizen scientists in our schools.”

The remaining $387,000 will go to the OCC, which plans to use the money for information technology upgrades, and to hire five staffers: two contract geologists, a contract clerical worker, a geophysicist consultant and a senior-level oil and gas attorney.

OCC spokesman Matt Skinner told NGI’s Shale Daily on Friday that the attorney “is needed to handle the extra workload posed by all the disposal wells, particularly with a view toward the possibility of induced seismicity cases.”

On Thursday, OCC Vice Chair Dana Murphy added that “efficient and timely handling of the huge amount of data involved is critical if we are to respond effectively to earthquakes. The governor’s prompt action on our request addresses those concerns.”

Two recent earthquakes of note, measuring 4.4 and 4.8 in magnitude on the Richter scale, struck within 30 seconds of each other on Jan. 6; the epicenter for both was 19.3 miles northwest of Fairview (see Shale Daily, Jan. 7). According to data from the U.S. Geological Survey, there have been 197 earthquakes of 2.5 magnitude or higher in Oklahoma over the last 30 days.