Four months after Oklahoma issued new rules for more than 300 disposal wells targeting the Arbuckle Formation, state regulators have expanded their scope to include more than 200 additional wells in an effort to reduce the frequency and strength of earthquakes scientists attribute to disposal well activities. 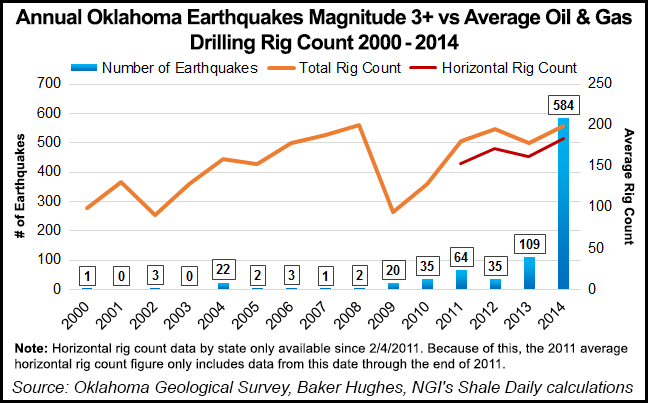 Last Friday, the Oklahoma Corporation Commission (OCC) said its Oil and Gas Conservation Division (OGCD) had received, at the direction of Gov. Mary Fallin, a $200,000 grant from state Secretary of Energy & Environment Michael Teague. The OGCD will use the grant to fund a directive ordering the operators of 211 disposal wells to prove by Aug. 14 that they are not injecting oil and gas wastes into basement rock below the Arbuckle.

The OGCD issued a similar directive to the operators of 347 disposal wells last March (see Shale Daily, April 2). The division said all of the wells lie within “areas of interest,” which include 21 of the state’s 77 counties that have seen increased seismicity.

“The directive we issued in March allowed some of the disposal wells to continue to operate if they reduced volume by 50%,” said OGCD Director Tim Baker. “Those operators are now being told they must reduce their depth if they are currently below the Arbuckle.

“Also, we have had recent seismicity in some areas that don’t have any of the high-volume, deep disposal wells considered of highest potential risk, most notably in the northern Oklahoma County and southern Logan County area. Operators of low-volume Arbuckle disposal wells in the area that have long been proven to be operating at the proper depth have now voluntarily shut down their wells to aid research efforts.”

In April, scientists with the Oklahoma Geological Survey (OGS) reported that the state is currently being hit by earthquakes at a rate about 600 times greater than historic background data (see Shale Daily, April 22). Seismicity increased from an average of one-and-a-half earthquakes of 3.0 magnitude or greater to about two-and-a-half such earthquakes every day in 2014.

The OGCD said that to date, 124 disposal wells targeting the Arbuckle have reduced their depth, or plugged back, since its March directive, while another 16 wells are in the process of plugging back. Meanwhile, 54 wells are limiting their disposal volumes to less than 1,000 b/d; 96 have proven they are injecting at the proper depth; 25 have cut their injection rate in half; and 37 are not injecting.

“There has been progress made, and we know far more than we did, but there is much more to be learned and more actions to be taken as we go forward based on the latest data and research,” Baker said. “There is still no issue more important to us, and to thousands of Oklahomans, than this.

“The progress that has been made is due to the hard work and dedication of the OGS and other researchers across the nation, support from Gov. Fallin and Secretary Teague, and the cooperation and input of Oklahoma’s oil and gas producers, who have not only cooperated on the operational level, but have also provided essential and sometimes proprietary data to OGS. I have no doubt the extraordinary effort, support and cooperation will continue.”

Last fall, Oklahoma regulators shut in a disposal well that was thought to have been drilled too deep following a spate of seismic activity in the area (see Shale Daily, Oct. 31, 2014).