An ancient geologic play is drawing new prospectors saddled with state-of-the-art technology into the Anadarko Basin of Oklahoma, where an Aubrey McClendon affiliate this week nabbed about 120,000 net acres and 6,000 net boe/d in a combination stacked play of the Woodford Shale/Mississippian Lime. 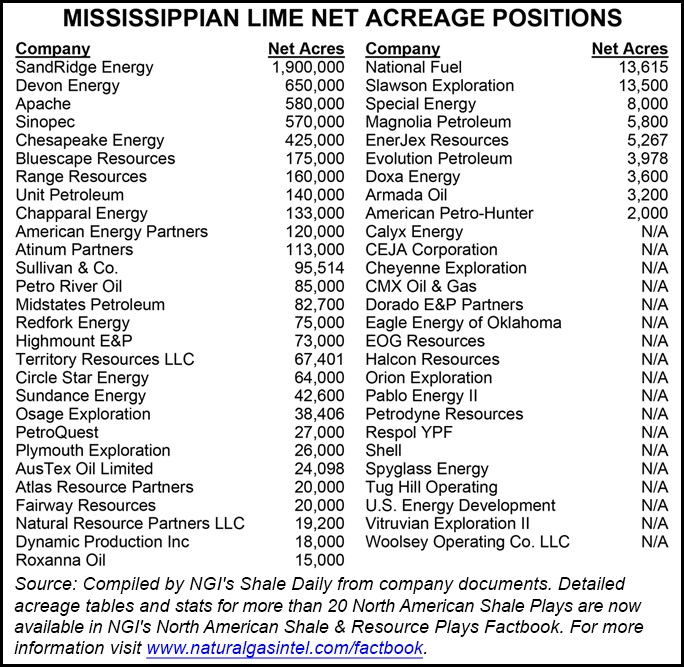 AEW secured $500 million in equity commitments from The Energy & Minerals Group (EMG), a familiar McClendon financier. The affiliate also received $180 million in bank borrowing to develop the play, dubbed CNOW (see Shale Daily, Feb. 24). The AEW affiliate has a goal of acquiring a leasehold of up to 200,000 net acres over time.

EMG, whose management team had ties with McClendon when he helmed Chesapeake Energy Corp., also has been the lead private equity investor in American Energy-Utica LLC, which is developing an Ohio leasehold that has its eyes on the public market (see Shale Daily, Feb. 20). The bank credit facility is led by Texas National Bank.

North-central Oklahoma hasn’t been bereft of opportunities, but its oily content had been put aside to concentrate on unconventional natural gas until oil prices started to climb while gas prices sagged. ExxonMobil Corp. is one of the operators that has made the Woodford its biggest onshore liquids holding in the United States. Anadarko’s north-central formation is stacked, with a lot of oil and liquids.

Newfield Exploration Co. calls its north-central Oklahoma opportunity the STACK, precisely because of the multi-formation (see Shale Daily, Nov. 7, 2013). Newfield’s leasehold is an extension to the north and east of a legacy position in the Cana Woodford in Kingfisher and Canadian counties.

Newfield’s main stack, the Upper Meramec formation in the lower Mississippian Lime, is separated only from the underlying Woodford by the intervening Osage formation. The vertical column of the stacked rock is up to 11,000 feet deep and includes in ascending order Hunton, Woodford, Osage and lower/upper Meramec. Hydrocarbon targets are in 700 feet of the oil-saturated Meramec, which accounts for around 475 feet of the column.

As earlier explorers discovered, the stacked carbonate formation is a tough rock to crack. Natural fractures serve as storage space for oil that migrates into the formation from the Woodford source rock.

At an energy conference in December, Newfield COO Gary Packer said the producer has “an opportunity to exploit about 325,000 acres of opportunity…because it is a considerable overlap when you actually look at what the Meramec play…relative to the Woodford…This play…is about 75 miles across. So it has a lot of breadth, and it’s a lot of opportunity to leverage our experiences that we’re developing in the south to the north…”

The STACK has two different objectives for Newfield, the Meramec, which Packer described as a “calcareous silky shale on top of the Woodford,” a Devonian-aged shale. “We stepped above it. We did not anticipate finding a Mississippian-age shale above it, but honestly we expected to see a carbonate limestone.”

When Newfield began drilling the first wells in the play, the opportunity was a bit different than expected, said Packer.

The target “isn’t the high producing water Mississippian play, but this is a shale play and we really get the leverage…What we are doing in the horizontal Woodford in the Anadarko in this new play, its very, very thick, 275 to 475 feet. You put that on top of the thick Woodford that we had already been drilling and I’ll show you some results; you end up with a 700-foot interval. So when we talk about play expansion and inventory growth, this is really what’s going to drive that.”

A big reason the ancient formation is drawing new participants is success in other carbonate plays like the Austin Chalk in Texas, which was tapped using horizontal drilling to intersect the natural fractures. Newfield also is using this technique in the Stack play with super-extended laterals, a horizontal drilling technique it helped to pioneer. Some of Newfield’s lateral lengths in the Stack are up to 10,000 feet.

As of November Newfield had drilled seven wells in the stacked formation with estimated ultimate recoveries of 800,000 boe to 1 million boe, 70% weighted to liquids and 40% to oil. Initial production rates averaged 900 boe/d; over 30 days the rates were 640 boe/d.

Also prospecting in the stacked region is Marathon Oil Corp. In early February CEO Lee Tillman told analysts that the producer hasn’t split its Anadarko Basin acreage into specific plays, but he said it has leaseholds between SCOOP and the Mississippian Lime trend within the Woodford. So far, results have been strong enough to lead Marathon to build a 28-rig program across the basin.

“We absolutely see the Oklahoma resource basin as an area of future growth and future capital allocation and competition,” Tillman said. “We see it very much as a growth opportunity for us.”