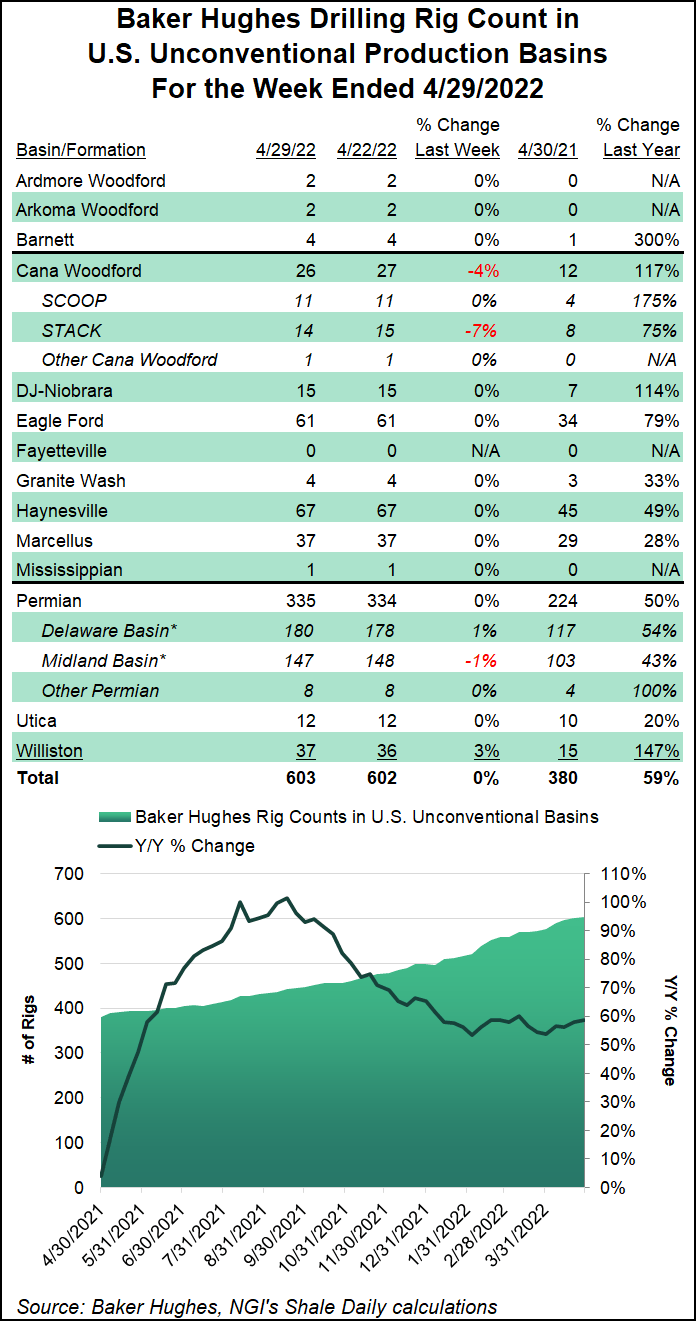 Activity gains in the United States for the week resulted entirely from oil-directed drilling and also included net increases of two rigs on land and one in the Gulf of Mexico. The 698 active U.S. rigs as of Friday compares with 440 rigs running in the same period last year, according to the BKR numbers, which are based partly on data from Enverus.

Four horizontal units were added overall in the United States for the period, partially offset by a one-rig decline in directional drilling.

The Canadian rig count fell six units to 95 for the week, up from 51 in the year-ago period. Changes there included declines of three oil-directed rigs and three natural gas-directed units.

Among major drilling regions, the Permian and Williston basins each finished higher on the week, adding one rig apiece to finish with 335 and 37 rigs, respectively. The Cana Woodford recorded a one-rig decline, dropping its total to 26, according to the BKR data.

Counting by state, Louisiana and New Mexico each added two rigs overall for the period. Texas and Utah, meanwhile, each dropped one rig from their respective totals.

For all the fear of lofty prices curbing demand, U.S. consumption of petroleum products rebounded for the week ended April 22 and producers maintained output at elevated levels by pandemic-era standards, according to updated data released earlier in the week by the U.S. Energy Information Administration (EIA).

Demand climbed 4% week/week to 19.8 million b/d. It marked the second consecutive weekly gain after a slump that spanned late March and early April amid the high prices for gasoline and other fuels during Russia’s war in Ukraine.

Production for the April 22 period totaled 11.9 million b/d, according to EIA. That was flat from the prior week but in line the highest level to date this year. It marked a substantial increase from the level maintained through much of the first quarter, when output had held around 11.6 million b/d.