Mexico could prove to be busy for the services sector in the years ahead as its producing wells age and the cost to keep them going mounts. 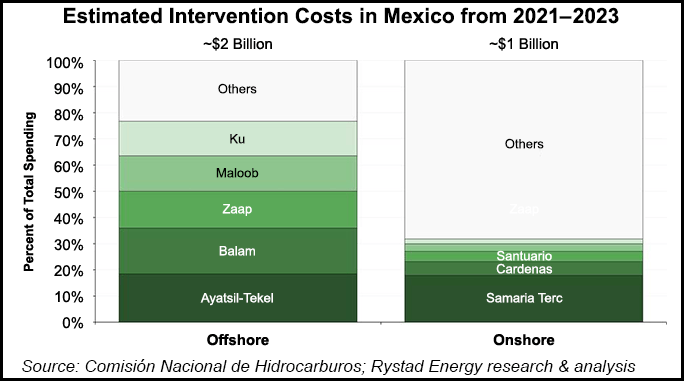 According to new analysis from Rystad Energy, around 75% of Mexico’s oil and gas producing wells are mature, and the cost to keep them pumping could exceed $3 billion from 2021 to 2023.

Rystad analysts see 30% of that being spent onshore, with the remaining 70% going offshore.

The number of producing offshore wells in Mexico dropped by 14% between 2015 and 2020. There was a steeper 27% decline for onshore wells in the same timeframe.

The drops follow relatively slower drilling activities over the same timeline, with offshore drilling at around 60% of the level seen between 2010 and 2015, Rystad analysts said.

For onshore drilling, the drop was even bigger, with the number of completed wells down nearly 80% from 2015 to 2020 compared to the previous five-year period.

“Both onshore and offshore drilling activity experienced peaks before 2015, so the median age for producing wells in Mexico has increased significantly in the past few years,” said Rystad analyst Daniel Holmedal.

“Water cuts have also increased for a majority of both offshore and onshore wells from 2015 to 2020. In addition, there seems to be an increased willingness to pursue intervention on younger fields.”

Among the onshore fields that would require the most spending, Samaria Terc stands out, according to Rystad. However, the more complex wells at Cardenas and Madrefil are likely to require costlier intervention techniques compared to wells at Samaria Terc.

In the offshore segment, four out of the top five fields in terms of spending are fixed facilities, Rystad analysts said. In terms of the wellbore age, Ayatsil-Tekel at two years and Balam at six years have the lowest median wellbore age, along with the longest offshore wells at 4,300 meters and 4,900 meters, respectively.

“For service suppliers exposed to the Mexican market, these fields provide a good breadth of intervention possibilities in the years ahead,” analysts said. “While fields like Ayatsil-Tekel and Balam are likely to require costlier intervention techniques, Zaap and Maloob will see lighter interventions.”

Management at Mexico’s Petróleos Mexicanos (Pemex) has stressed this year they are focusing on 20 new priority fields to stem years of production declines and increase overall production by 100,000 b/d each year through 2024.

During an earnings call last week, Pemex executives said these new fields had added 123,000 b/d of new production from 15 producing areas by the end of September.

Thirteen wells were drilled at the priority fields during the third quarter, and the company will complete and start production from 27 additional wells in the fourth quarter.

Production was led by the southeastern Mulach, Quesqui and Ixachi fields. The latter two are natural gas-rich.

Also last week during a conference call with investors, Royal Dutch Shell plc CEO Ben van Beurden said Mexico is one of the “promising areas we have in deepwater,” where the focus is on “delivering growth that will offset some of the decline that we will have in other areas.”

Shell is set to invest an initial $33 million in the project. 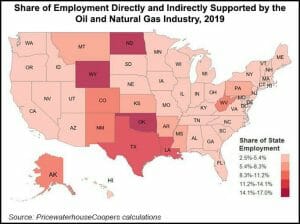