A modest gain in oil-directed drilling offset a small decline in natural gas activity to nudge the combined U.S. rig count one unit higher to 764 for the week ended Friday (Sept. 23), according to the latest tally from Baker Hughes Co. (BKR). 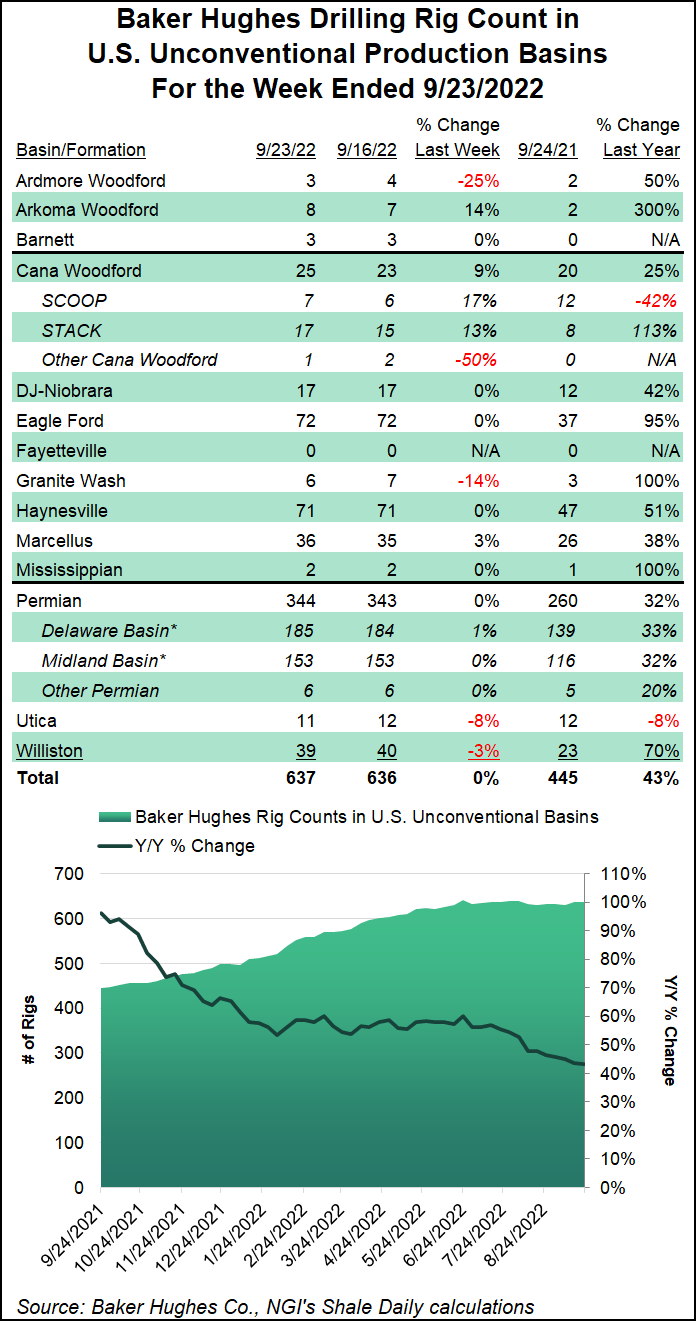 Oil-directed rigs increased by three overall in the United States for the week, while natural gas-directed rigs declined by two. The combined 764 active U.S. rigs as of Friday represents a 243-rig increase over year-earlier levels, according to the BKR numbers, which are partly based on data from Enverus.

Total land drilling was unchanged week/week, while the Gulf of Mexico added one rig overall to raise its total to 15. Vertical drilling increased by two rigs, while one directional rig was added for the period. Partially offsetting was a two-rig decline in horizontal drilling, the BKR data show.

The Canadian rig count climbed four units for the period to reach 215, reflecting gains of two oil-directed rigs and two natural gas-directed units. Canada’s rig count as of Friday was up 53 units over year-ago levels.

Broken down by major drilling region, the Cana Woodford added two rigs week/week, while the Arkoma Woodford, Marcellus Shale and Permian Basin each added one rig. The Ardmore Woodford, Granite Wash, Utica Shale and Williston Basin each posted one-rig declines for the period.

Counting by state, New Mexico picked up three rigs week/week, while Louisiana, Oklahoma and Pennsylvania each added one. On the other side of the ledger, Texas dropped two rigs from its total, while Kansas, North Dakota and West Virginia dropped one rig each, the BKR data show.

Domestic crude output stalled during the week-earlier period at a level below the 2022 peak, and far lower than the pre-pandemic high, according to updated data released earlier in the week by the Energy Information Administration (EIA).

After climbing earlier in the summer, U.S. production flattened for the past four weeks at 12.1 million b/d, EIA said in its Weekly Petroleum Status Report. That kept output below the 2022 high of 12.2 million b/d and about 1 million b/d lower than the pre-pandemic pinnacle reached in early 2020.

Exploration and production companies have boosted output from well below 12.0 million b/d in the pandemic’s immediate aftermath in 2021 and early this year. But they have done so cautiously amid political pressure to invest more in renewables and bouts of oil demand uncertainty.