Ohio Gov. John Kasich joined elected officials in northwestern Ohio on Monday to cut the ribbon for one of the state’s largest and most efficient natural gas-fired power plants, announcing his support for the deregulated power market as other generators push for subsidies.

The Oregon Clean Energy Center is one of the region’s first facilities developed in response to low-cost shale gas supplies produced in the Appalachian Basin, where dozens of other facilities are planned or under construction.

Nuclear generators want subsidies from the state to keep their plants online as electricity costs have fallen. Kasich took the ceremony as an opportunity to throw his support behind the natural gas industry, which is lobbying hard to prevent subsidies for nuclear generation.

Kasich announced his support for competitive power markets, and said gas-fired power “is the future. I think it’s important that Ohio stay in a deregulated environment, which brings in investors.”

The 870 MW Oregon Clean Energy Center entered service last month and is now fully operational. Developed by Boston-based Clean Energy Future LLC, the facility is owned by Ares Management LP affiliates and I Squared Capital. Planned upgrades at the plant in Lucas County would increase its output to 908 MW.

Clean Energy filed an application with the state in January 2013, and Monday’s ceremony concluded the four-year process, which employed 950 people at the peak of construction. The $800 million plant can provide electricity for more than 700,000 homes.

Clean Energy operates or is developing more than 3,000 MW of additional gas-fired power in the state. 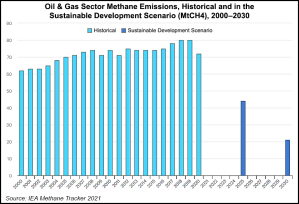