The parameters of Ohio’s Utica shale play are extending beyond a three-county swath in the eastern part of the state, spreading south as more exploration and production companies set out to validate their acreage and gain a better understanding of what the play holds. 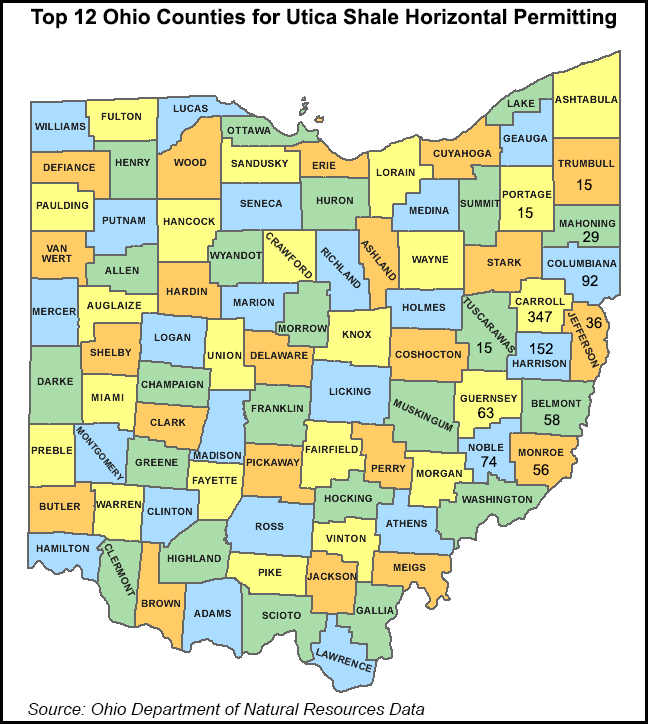 Carroll, Harrison and Columbiana have been the top-three counties, respectively, for drilling in the state since about 2011, but this year saw an uptick in operators that struck out farther south and southeast, where officials at the Ohio Department of Natural Resources (ODNR) say permitting activity has undoubtedly been on the rise.

“I guess you could say there’s been a lot more activity in the southern region; in the counties of Harrison, Belmont, Monroe, Guernsey and Noble,” said Shawn Bennett, a spokesman with the industry-outreach group Energy In Depth. “What you’re seeing is, for so long Chesapeake has been the clear leader in the Utica; they’re the ones developing Carroll County. Now others are catching up and finding out where they stand in the play.”

But even though Chesapeake holds 545 horizontal drilling permits, according to state records, the company doesn’t hold all of the Utica’s potential, said Don Fischbach, chairman of the energy group at Calfee, Halter & Griswold, a Cleveland-based law firm.

“I think the drilling focus has expanded, more operators are drilling their leasehold; the play isn’t moving,” he said. “People are trying to figure out where the fence line is in the south; they’re trying to figure it out in the north too. Nothing is for sure. The only thing that’s certain is Devon Energy failed on the western fringes of the play.

“What you’re really seeing is an expansion of the core. Drilling is not so much moving, it’s just being expanded to show that Chesapeake doesn’t have it all,” Fischbach said.

“We have seen a big increase in permitting down there,” said ODNR spokesman Mark Bruce. “Everyone at [the] DUG East [industry conference] couldn’t say enough about how pleased they were with the results there.”

In recent months, those in Ohio’s oil and gas industry have taken to referencing a pickle-shaped swath that runs roughly from Noble County in the south to Columbiana County in the northeast.

The shape was first referenced by Harry Schurr, general manager of Utica operations for Consol Energy, who made a presentation at the Youngstown, OH, Utica Natural Gas Conference and Expo in September.

Within the pickle, Schurr said there are five windows, where the composition of oil and gas varies from black and volatile oil to condensate and wet and dry gas.

“The knowledge of the resource is improving, and there will be a sharper focus on commodity prices, drilling techniques and economics as these operators determine what they want to go after,” Fischbach said.

Consol Energy has directed its attention to Noble County in the far south.

“Our 2012 exploration program in the Utica Shale enabled us to believe that we’ve identified the sweet spot in the play,” wrote Lynn Seay, a Consol spokeswoman, in an email. “Consol now has 30,000 net acres in the core and per our 3Q operations release, during the third quarter, in the Utica Shale joint venture with Hess Corp. Consol drilled three wells located on the NBL 19 pad in Noble County.”

In Belmont County, in the state’s southeast, Gulfport Energy, the Utica’s No. 2 driller, reported a monster well in its third quarter report (See Shale Daily, Nov. 8). The company reported that its Irons 1-4H well there had an initial production rate of 30.3 MMcf/d.

Meanwhile, operations still continue at a steady rate in the play’s original hotspot of Carroll, Harrison and Columbiana counties, where 591 horizontal permits have been issued.