It’s no secret that exploration and production efforts in Ohio’s Utica Shale have been slowly gaining momentum in the last three years, but if you ask two of the state’s leading regulators, development is about to significantly escalate and they have their work cut out for them. 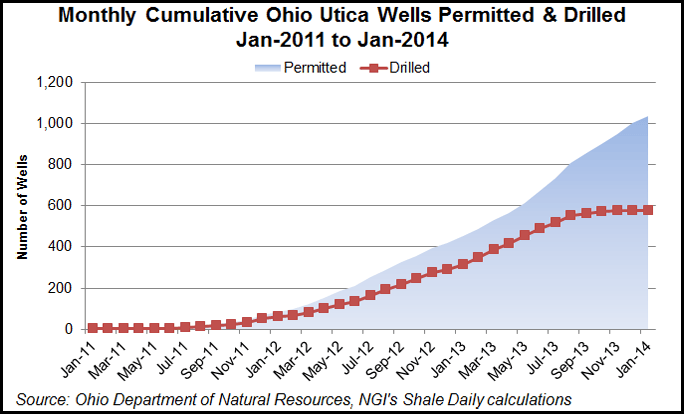 “We’re really beginning to get to that incline where the activity is really going to start picking up,” said Rick Simmers, chief of the Ohio Department of Natural Resources’ (ODNR) Division of Oil and Gas Resources Management. “We’ve heard a lot about that exploratory phase and now operators are really pushing into full-scale development.”

In an interview with NGI’s Shale Daily, Simmers was joined by ODNR Director James Zehringer, who also gave a presentation and participated in a panel discussion at an event in Niles, OH, on Thursday. Both men painted a picture of the play’s arch and showed numbers and data that demonstrate how the Utica has transformed into one of the fastest emerging unconventional resource plays in the country.

In 2010, ODNR had just 37 people on staff, today, Simmers said, that number has more than tripled to 115, with the agency in the process of hiring 25 more people and under the authority to hire more if it feels the need. In November, the state reached a milestone when it surpassed 1,000 horizontal drilling permits issued (see Shale Daily, Dec. 6, 2013). As of Thursday, ODNR had issued 1,042 permits and Zehringer said the agency is projecting another 700 by the end of this year and another 800 by the end of 2015.

By a similar measure, there were just three wells drilled in the state in 2011 and today there are 679 that have been drilled. ODNR predicts that the state will see 1,830 wells drilled by 2015. Those are just estimates, though, and Simmers noted that operators exceeded 2013 projections by 62 permits.

With the uptick in activity comes more responsibility for ODNR and both Simmers and Zehringer are keenly aware of that. Ohio is unique because the state plays host to more people per square mile than nearly every other major shale play in the country.

“The Utica is simply different than any other shale play because companies must work harder at what they do here; it affects more people,” Zehringer said. “We have a huge advantage because our shale play wasn’t the first to be developed. We personally contacted leaders in Oklahoma, North Dakota, West Virginia and Texas to discuss the lessons learned. The industry here has to know what’s expected of them and that’s what we’ve done in the last few years. Our regulations are going to be tough and thorough, clear and complete.”

According to the U.S. Census Bureau, population density in Ohio amounts to 198.7 people per square mile. In Pennsylvania, there are 88.7 people living within one square mile, while 34.5 live in an area of development in the Eagle Ford and 4.8 live in the Bakken Shale play’s development areas.

For more than a year now, ODNR has been working to draft rules that will establish the minimum, enforceable standards for updated regulations involving wastewater impoundments, recycling plants, injection wells, spill protections and highly technical well pad construction requirements. Simmers said by the time the rules are proposed, reviewed and approved by a legislative committee, there could eventually be 15-22 new rule packages that operators will have to comply with. The first of those rules, Simmers added, will be released for public comment in the coming weeks and they will detail new well pad construction requirements.

“Most of the rules, especially those for the pads and wastewater facilities, are extremely technical. One of the challenges we had was we didn’t have any staff engineers,” Simmers said. “We had to go out and find well-qualified engineers and hire them, because we wanted them to also be reviewing what a company submits for a permit.”

Under the draft rules, operators will be required to submit a layout plan for their well pads to show where equipment and infrastructure will be placed and how impacts to the environment will be mitigated.

“We haven’t had much comment from anybody yet. A few we are getting, though, is that some of these proposals are so highly technical that it might cost extra money to hire the proper staff to technically implement them on the industry side,” Simmers said. “One of our proposals is that they have to use Ohio-licensed engineers and oversee construction according to our plans and regulations. There will be additional costs associated with that, and it’s a primary concern for people in the industry right now.”

A large part of the new draft rules will focus on wastewater recycling. In 2013, there were 14.2 million barrels of fracking wastewater disposed of in underground injection wells. Waste has been on the rise in Ohio ever since a January 2012 change to Pennsylvania regulations that required far more stringent rules at wastewater treatment plants there, forcing operators to truck the water over state lines, Simmers said.

That meant ODNR had to pivot from favoring underground injection to coming up with other ways to manage the influx of wastewater. The industry had also requested more options as well, he said.

“The injection wells aren’t being inundated, they’re very busy, but they still have a lot of capacity left in them,” Simmers said. “The drive behind this was the companies are telling us that they are going to need injection, but they want to have other processes available. Recycling is the main one they want. We said we agree, but it has to be done properly.”

The state will roll out a two-phase rule on recycling plants, which are expected to be constructed steadily in the coming years. One will establish standards for the construction of such a facility, while the other will set out a permitting process.

All the rules will be subject to review five years after they are implemented, Simmers said. Freshwater impoundments had been permitted in the state, but in October, ODNR said it would begin permitting temporary wastewater impoundments this year (see Shale Daily, Oct. 11, 2013). Simmers said it was still unclear how long operators would be able to store their waste in pits, but he said they would likely be full most of the time because companies will continually reuse the water in nearby wells and replacing old waste volumes with new ones.

As a new severance tax proposal is building consensus in the Ohio House of Representatives (see Shale Daily, Jan. 9), Simmers said his agency is watching its progress closely.

Last year, Gov. John Kasich called for a tax rate of 4.5% to be imposed on oil and natural gas liquids (NGL) and a 1% rate on natural gas that failed in the General Assembly. Under the current proposal, put forward by Republican lawmakers, a 1% rate would be raised on the net value of oil, natural gas and NGLs during the first five years of horizontal production and increase to 2% after that until wells hit their decline curve.

Some have said the proposed rate is too low, while others fear any increase could discourage development, a claim Simmers dismissed.

“The bill that has been proposed — we’ve been doing an analysis on it — but some parts are kind of confusing,” he said. “We’re going through and trying to evaluate what it means and what the revenues would be under the proposed rates. I don’t know if it’s necessarily a matter of too low or too high, but you have to compare it with the potential production. No matter what the tax rate is, production will drive the total monies received.”

Last month, the agency issued its first quarterly report showing that 33.6 Bcf and 1.3 million bbl of oil were produced in the Utica during the third quarter (see Shale Daily, Jan. 2). Simmers addressed a major concern of financial analysts and others, who felt they couldn’t glean much from the numbers because the report does not include NGL production figures.

He said the agency had pushed to include those figures in the legislative language but its efforts ultimately failed, which he said was a mistake on legislator’s behalf. In the future, ODNR could push for such a requirement, he added.

“Those are important numbers. We can extrapolate some of those based on the average btu content in the gas, but I can tell you NGL production is going to be very high,” Simmers said. “I think as processors get online and you have full takeaway capacity, you’re going to see very high volumes of NGLs. The market has to develop and everything in this play is moving just the way it should be at the moment.”