The Ohio Department of Natural Resources (ODNR) on Thursday implemented new rules for the construction of horizontal well pad sites that require operators to submit detailed plans that must be certified by a professional engineer and reviewed by state regulators. 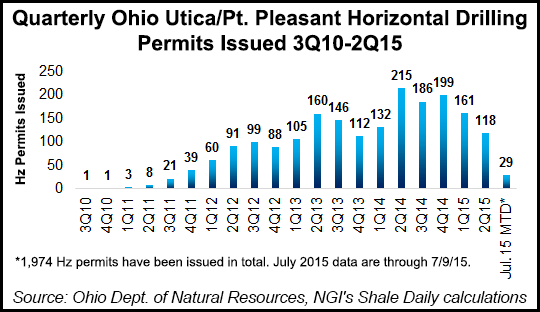 The new rules, ODNR said, are among some of “the most comprehensive and proactive” well pad regulations in the country. They are aimed at promoting safe drilling and environmental protection by managing stormwater, ensuring clean surface water and reducing soil erosion.

Under the new rules, operators must now submit detailed horizontal well pad site plans, including drawings of well pad features, an emergency map, a geotechnical report and a sediment and erosion control plan. After certification by a professional engineer, the plans would be reviewed by ODNR’s Division of Oil and Gas Resources Management (DOGRM). The division would also send regional engineering staff to inspect sites during each stage of construction to ensure compliance with the new standards.

Horizontal well pads are larger than traditional pads and commonly house more wells, requiring more acreage and access routes. Roads are also addressed in the new rules and must provide adequate access in the event of an emergency and must be large enough to ensure the safe transport of well site materials.

The new rules are part of a broader process at ODNR, which has been working on drafts since 2013 to update oil and gas regulations involving wastewater impoundments, recycling plants, injections wells and spill protections, among other things (see Shale Daily, Dec. 24, 2013). In an interview with NGI’s Shale Daily last year, DOGRM Chief Rick Simmers said that by the time the new rules are proposed, reviewed and approved by a legislative committee, there could eventually be 15-22 new rule packages that operators would have to comply with (see Shale Daily, Jan. 17, 2014).

Ohio Oil and Gas Association Executive Vice President Shawn Bennett said the new well pad rules are the result of numerous meetings between ODNR, the industry and other stakeholders.

“While through the process ODNR has addressed a number of our issues,we still have serious concerns [about] the added costs on already expensive wells,” he said.

A push for updated regulations has come with the acceleration of unconventional oil and gas development in Ohio since 2010. The state reached a milestone in November 2013 when it issued its 1,000th horizontal permit. Today, the state has issued nearly 2,000 unconventional permits and 1,531 Utica wells have been drilled. In 2013, conventional and unconventional natural gas production was 166 Bcf, but by the end of 2014 combined production was 518 Bcf, of which shale drillers produced 452 Bcf (see Shale Daily, March 24).

The new well pad requirements were the first of ODNR’s draft rules to be released for public comment last year. Simmers said one of the reasons the rules have taken so long to develop was staff issues at ODNR. When it set out to craft the new well pad rules, for example, ODNR had no qualified staff engineers to review and inspect for new standards. In 2010, ODNR had just 37 employees. By last year that number more than tripled to 115, and the department continues to hire.