If it decides to make the investment and build an ethane cracker in Belmont County, OH, Thailand’s PTT Global Chemical (PTTGC) pcl said earlier this week that it plans to begin commercial production at the facility by 2020. 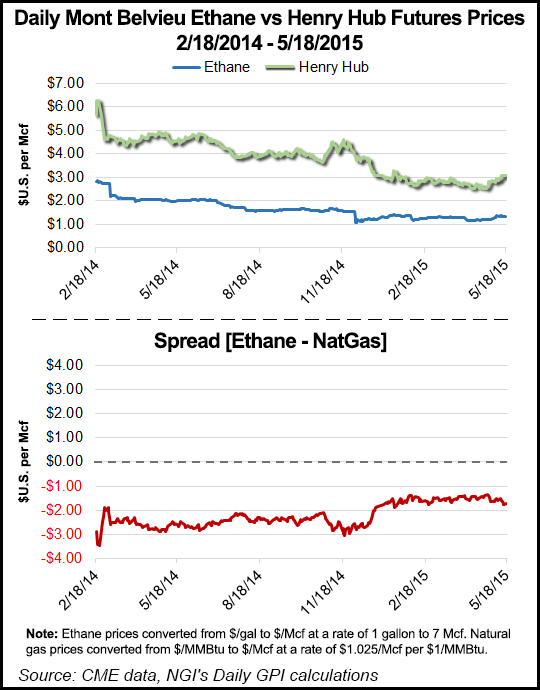 The petrochemical subsidiary of Thailand’s state-owned oil and gas company, PTT pcl, announced in April plans to partner with Japan’s Marubeni Corp. to construct the ethane cracker in southeast Ohio at the heart of the Utica Shale and near the Marcellus Shale (see Shale Daily, April 23). At the time, the companies said no final investment decision would be made until 2016. Although the company said it had been searching for a location in the Appalachian Basin for nearly two years, it has not yet disclosed the site.

But in its first quarter earnings report the company said it is planning for a one million tonne facility that would cost nearly $6 billion to complete. PTTGC said it is also seeking a third partner for the venture with Marubeni Corp. to help finance the project. Company officials added that Marubeni Corp., a global services company with business in various sectors including food, textiles, chemicals and energy, would help PTTGC “penetrate the North American market.”

Management said the company’s board of directors has already approved the project. It expects to sign an agreement to pursue the facility with Marubeni Corp. and a third partner later this year. The cracker would convert locally sourced ethane from the Marcellus and Utica shales into ethylene and polyethylene, which are key building blocks for plastics.

Before any final investment decision is made, the company said, a one-year study would be conducted to look into infrastructure availability, state and federal government tax incentives and labor costs, among other things.

As a result of the spread between the price of oil and natural gas, the U.S. plastics industry is expected to grow rapidly over the next decade, according to a recently released report by the American Chemistry Council (see Shale Daily, May 18).

Asian and European plastics producers typically use an oil-based feedstock rather than natural gas-based feedstocks. In its earnings release, PTTGC said the project could have cost advantages as a result and noted that the Ohio site is near regions with a “high level of demand for petrochemical products.”

The company is also targeting up to a 35% increase in revenue from ethylene production over the next seven years. PTTGC’s ethane cracker is among four others that have been announced for Ohio, West Virginia and Pennsylvania (see Shale Daily, May 2, 2014; Nov. 14, 2013; Jan. 19, 2012; June 7, 2011). None have broken ground, and Odebrecht SA said in April that it was putting its plans for a cracker in West Virginia on hold pending further project analysis amid the commodities price downturn.