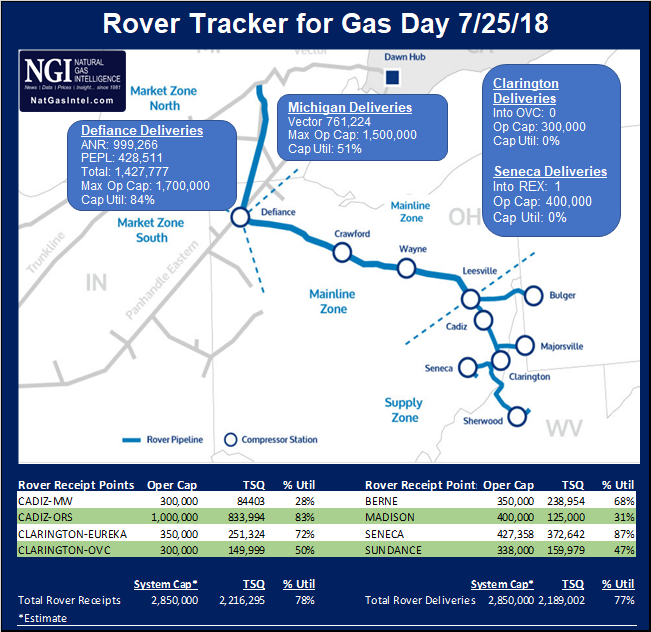 Earlier this month, Ohio EPA issued an NOV to Rover for disposing of “spent drilling mud containing low level PCEs” at an industrial mineral site in Ashland, OH, without a state-approved plan. Ohio EPA, which forwarded the NOV to FERC, said the drilling mud qualified as an industrial waste under state law.

Rover Senior Vice President Chris Sonneborn, in charge of engineering for the pipeline, fired back in a letter filed to the Federal Energy Regulatory Commission on Monday, saying Rover is not the source of the PCE and that the low levels discovered do not present a danger to human health or require remediation. Sonneborn further questioned the timing of the NOV, pointing to Ohio EPA tests that “first revealed the presence of low-level PCE in their samples collected more than a year ago.

“All of this simply confirms that Ohio EPA’s filing of the NOV with FERC was not for any legitimate purpose, but rather was an attempt to cynically use the Commission to once again delay the completion of this necessary project,” Sonneborn wrote.

“…We are unaware that the Ohio EPA has ever identified spent drilling mud/slurry with low levels of PCE as an industrial waste in the context of a pipeline construction project,” Sonneborn said.

Ohio EPA has continued to closely scrutinize Rover, taking legal action against the pipeline and pursuing additional permits and more than $2 million in fines and penalties over numerous alleged environmental violations.

Earlier this year, Ohio EPA raised concerns about the project’s second HDD at the Tuscarawas River, which FERC temporarily halted.

A number of the remaining portions of Rover’s final phase of construction entered service in early June, upping flows on the pipeline from around 1.6 Bcf/d to roughly 2.2 Bcf/d, according to NGI’s daily Rover Tracker.

But FERC, taking issue with delays in completing restoration work, has yet to authorize service on four supply laterals, including the completed Burgettstown and Majorsville lines. Rover, among the largest Northeast takeaway expansions under development, is designed to deliver Marcellus and Utica shale gas to markets in the Midwest, Gulf Coast and Canada.