Rover Pipeline LLC continues to press FERC on a request to restart horizontal directional drilling (HDD), filing supplemental information and third-party analyses to persuade the Commission to lift a May moratorium. 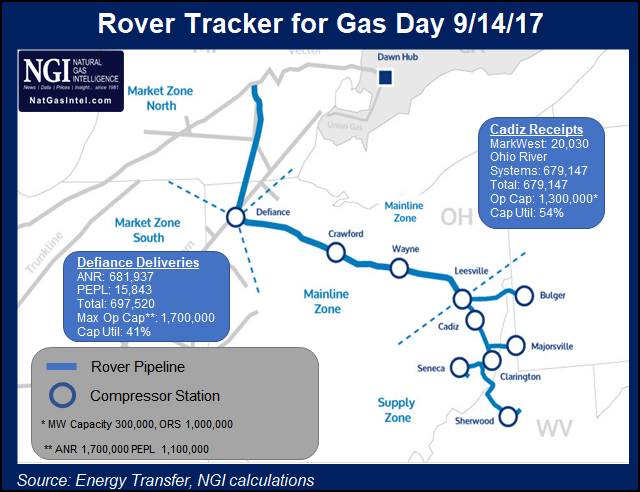 Meanwhile, the Ohio Environmental Protection Agency (Ohio EPA) and Rover remain at odds over the state agency’s jurisdiction over the project and the timing of the HDD restart the company has requested.

On Tuesday Rover submitted a series technical analyses to the Federal Energy Regulatory Commission for several remaining project HDDs. Rover urged the Commission to “continue to consider its request to restart HDDs for which the analyses have been provided as soon as practicable.” The technical information was prepared by GeoEngineers Inc., an HDD specialist which is reviewing Rover’s operations after a 2 million gallon drilling fluids spill in April near the Tuscarawas River in Stark County, OH.

In a separate filing last week, Rover submitted a series documents to FERC in response to the Commission’s Aug. 22 letter detailing additional requirements before it would reauthorize HDDs on the 710-mile, 3.25 Bcf/d pipeline. Rover said the filings should be considered “a complete response to the recommendations presented” and the associated recommendations from a separate independent HDD engineering review conducted by J.D. Hair & Associates Inc., the firm FERC selected to examine the Tuscarawas incident.

Following Rover’s submission last week, Ohio EPA Director Craig Butler penned a letter to FERC urging it to wait before giving the project the go-ahead to restart the HDDs, citing “substantial noncompliance” with a requirement that Rover file for a state stormwater permit, part of a series of July 7 unilateral orders.

“Ohio has attempted to resolve these issues with Rover, but Rover continues to delay any resolution,” Butler wrote. “Ohio believes the delay may be due to recent FERC approval to allow certain portions of the pipeline to go into service and Rover’s expectation of receiving FERC approval to resume additional HDD work. We respectfully request that FERC not approve Rover’s…request to restart HDD operations in Ohio until Rover resolves all noncompliance matters in Ohio, including full implementation of the plans required by the FERC directive and Ohio EPA’s unilateral orders.”

Ohio EPA and Rover have seemingly been at odds ever since the project began construction earlier this year, with state regulators citing Rover for numerous environmental violations. Butler wrote to FERC in May asking for help responding to the Tuscarawas spill and other violations, saying that Rover was challenging Ohio EPA’s enforcement authority. A few days later, FERC stepped in to issue its order halting new HDD work.

Ohio EPA has doggedly pursued enforcement against Rover ever since, issuing the unilateral orders in July and calling on the Ohio Attorney General to assist in collecting hundreds of thousands in civil penalties.

Rover has maintained that Ohio EPA does not have jurisdiction over the project, though in general the company has worked with the agency to comply with the July 7 unilateral orders; the stormwater permit is the lone exception, an Ohio EPA spokesman told Shale Daily recently. FERC has also made compliance with Ohio EPA requirements a condition for receiving key approvals, including the recent in-service authorization for a portion of the project running from Cadiz, OH, to Defiance, OH.

After delays in getting its FERC certificate, Rover moved quickly on construction in an effort to meet its original target start-up dates this year. The HDD moratorium has delayed the completion of a portion of Phase 1, preventing progress on a key HDD crossing of Captina Creek in eastern Ohio.

Rover’s sponsor Energy Transfer Partners LP has said that the Captina Creek HDD would take about 40 days to complete once FERC lifts the moratorium. Management has said it plans to finish all construction by early December.

Butler urged FERC to guard against the potential for any repeats of Rover’s previous alleged environmental violations. “It is imperative that drilling activities” at the Tuscarawas site “and all additional locations across Ohio be done with the utmost care to ensure that we do not see a repeat of the violations experienced to date,” he told FERC. “Ohio is very concerned that delays in construction will only heighten Rover’s expectations to expedite pipeline construction regardless of possible environmental and public health impacts across Ohio.

“…Ohio has made some progress with Rover to address the noncompliance issues. This progress has been due, in large part, to the strong partnership between Ohio and FERC.”

“Rover has fully complied with all the substantive requirements of the unilateral order on a voluntary basis, despite Rover’s belief that the Ohio EPA lacks jurisdiction and the fact that Rover has appealed the unilateral order on that basis,” Erwin wrote, calling the state stormwater permit “the only specific example of alleged noncompliance Ohio EPA can even muster.

“…In the end, Rover hopes that Ohio EPA did not submit the letter because settlement discussions between Rover and Ohio EPA have hit an impasse over Ohio EPA’s insistence on extracting an unreasonable and unwarranted civil penalty from Rover as part of any potential settlement (which, again, assumes that Ohio EPA even has the authority to assess such a penalty).”

Erwin said Rover also takes issue with Butler’s suggestion “that Rover is somehow incentivized to expedite construction regardless of the environmental and public health consequences. This is a false and malicious assertion. Safety and compliance are always Rover’s top priorities and Rover takes these responsibilities extremely seriously.”

Erwin pointed to the company’s efforts to incorporate recommendations from both J.D. Hair and GeoEngineers in its future HDD designs.

“In short, Rover is doing all it can do to use long-recognized HDD industry design standards and drilling procedures. Thus, any allegations that Rover would sacrifice safety for expediency are wholly untrue.”

Earlier this year, FERC’s Office of Enforcement launched an investigation into the presence of diesel in the drilling mud at the Tuscarawas site, which Rover has suggested might have been the result of “sabotage.”

In preliminary findings from a separate FERC enforcement investigation, the Commission has alleged that Rover violated its certificate by failing to disclose plans to demolish a historic home in Ohio.

Rover, supported by capacity commitments from Marcellus and Utica shale producers, is designed to deliver natural gas from the Appalachian Basin to markets in the Midwest, Gulf Coast and Canada. The project is highly anticipated because of its potential to unleash significant volumes of incremental takeaway from the constrained Northeast.

This month, Rover began flowing initial volumes through its Phase 1A segment. For Thursday’s gas day, Rover was flowing slightly under 700 MMcf/d from receipt points in Cadiz to interconnects with ANR and Panhandle Eastern in northwest Ohio, according to NGI’s new Rover Tracker.