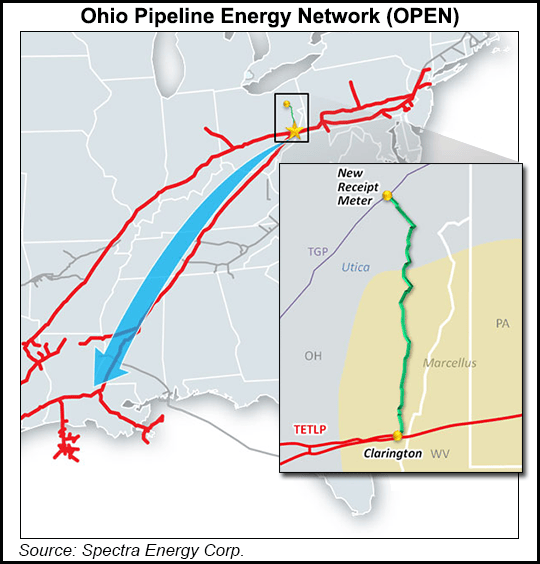 Roger and Lana Barack of Belmont County have enlisted the help of the 1851 Center for Constitutional Law in Columbus, OH, a non-profit legal center, which asked the U.S. District Court for the Southern District of Ohio earlier this month to deny Tetco’s motion for immediate possession. OPEN was granted approval by the Federal Energy Regulatory Commission in December (see Daily GPI, Dec. 4, 2014).

It remains unclear if the Barack’s unwillingness to cede land to the project would delay development. Construction is slated to begin before the end of March, and the pipeline could be in service by the end of the year, according to a Spectra spokesman.

“Throughout our communications with landowners, we have been clear about the project in-service date, the time required for construction and the need to finalize the easement agreements,” said spokesman Devin Hotzel. “As we have stated to each property owner, we will continue to negotiate with the expectation that a mutual agreement can be reached. Of course, our preference would be to reach an amenable resolution.”

The couple’s lawyer, Maurice Thompson, said in a filing with the court that Tetco’s motion should be denied, primarily because the Ohio Constitution prohibits “quick-takings” for anything that’s not a legitimate public use. In this case, Thompson said, the state constitution is not preempted by the Natural Gas Act or any other federal law. He added that if the property is seized, the Baracks would have to be compensated.

“While we fully support energy development in eastern Ohio, that development does not preclude Ohioans’ property rights,” Thompson said. “Simply asserting the proper defenses can force pipeline companies to choose a pipeline route that goes around objecting landowners properties, or for enterprising Ohioans, raise offers for their land by hundreds of thousands of dollars.”

Hotzel said Tetco has already acquired 65% of the necessary right-of-way and plans to continue negotiating for the remaining open tracts.

“Texas Eastern does not and will not use eminent domain authority as a negotiating tool. We will only exercise that right as a means of last resort in the event a resolution is unacheivable,” he said. “In the unlikely event that we cannot reach an agreement with a landowner and must obtain the easement interests through the eminent domain process, a court will determine the appropriate compensation in a valuation proceeding.”