A special interest group in Ohio has released a report detailing what it believes must be done to improve the state’s energy competitiveness, highlighting a plan that would require an even stronger focus on building and promoting shale gas resources. 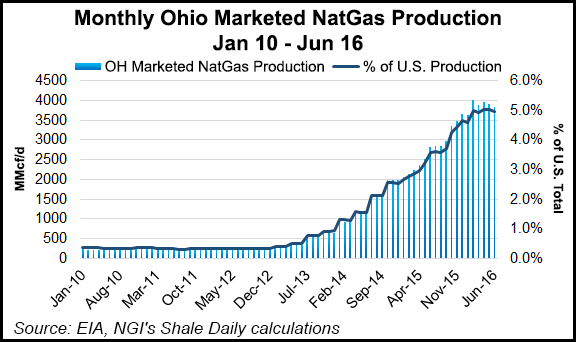 The Ohio Business Roundtable (BRT), an influential partnership of the state’s leading chief executives of companies representing $2.6 trillion in assets, said it has identified energy competitiveness as a top priority this year and next. Conducted by McKinsey and Co., the report was more than a year in the making and includes a companion summary of proposals to advance its findings.

To respond to the nation’s changing energy landscape and position the state as an energy leader, the BRT said the state will need to act more decisively to maximize Ohio’s natural gas advantage, meet the evolving needs of the power market and build the required infrastructure to do so, among other things.

The study found that ongoing production from the state’s Utica Shale could increase Ohio’s gross domestic product (GDP) by $8 billion and sustain 130,000 jobs by 2025. The report said that of the estimated $8 billion in GDP growth, $2 billion is expected to come directly from the oil and gas industry, with another $6 billion expected from local manufacturing, services and related sectors. Compared with other U.S. shale plays, the report found, the Utica is considerably cost-competitive, with gas extraction running about 16% lower than the national average across other basins.

BRT said in order to realize such growth, the state’s leaders must “nurture” Utica production growth from 2 Bcf/d to more than 10 Bcf/d by “overcoming emerging transportation bottlenecks from key production areas to key demand areas.” The group also said it is important to “boost” investor and producer confidence by creating certainty about production, regulation and the state’s future tax structure, as talks have persisted in recent years about increasing the oil and gas severance tax (see Shale Daily, Oct. 23, 2015).

Of paramount importance to sharpening the state’s energy edge, BRT said, is the nation’s shifting electric power landscape. The report noted that more coal-fired power plants have retired in favor of natural gas plants in recent years. Ohio has seen a 29% decrease in coal generation over the last six years, while gas generation has increased twelvefold. Ohio has 12 gas-fired generation plants in varying stages of development, that represent a potential 5,900 MW of capacity, or enough to power six million homes (see Daily GPI, May 13).

Renewables, especially wind power, are also expected to account for a growing portion of Ohio’s generation mix in the next 15 years. All of the gas-fired plants under development are backed by private investment, rather than the state’s regulated utilities. While better technology has contributed to the rise of renewables, the report said, mandates and subsidies continue to contribute to the sector’s rise.

BRT said mandates requiring the state to generate more power from renewables should be done away with. The renewable sector’s growth, the report said, should be market-based. In 2014, the state passed a bill to freeze requirements that utilities meet annual benchmarks and generate 25% of their electricity from renewables by 2025. That bill authorized a two-year freeze, which expires soon, setting the stage for another debate on the issue.

In order to better fuel the power sector’s growth and transition in the state, BRT recommends strengthening Ohio’s voice in the PJM Interconnection and at the Federal Energy Regulatory Commission to improve the capacity market climate and “allay” wholesale market uncertainty. Cost-effective generation assets could also be better promoted in stranded gas areas, the report said, where gas supply exceeds pipeline capacity.

BRT said it would use the report’s findings in the coming months as a “beginning framework to engage our partners across Ohio in serious, fact-based dialogue” to advance some of its recommendations.