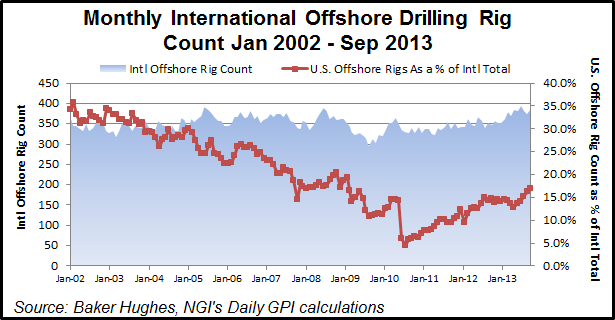 The company in late September said it plans to split its operations, with one business comprised of standard specification (spec) drilling units, and one owning and operating high spec assets working in deepwater and ultra-deepwater markets, including those in harsh environments.

“With the continued success of our shipyard program, Noble benefited from the earlier-than-expected commencement of operations on two new ultra-deepwater drillships, which combined with a further reduction in total operational downtime, fewer shipyard days and essentially flat operating costs, were the primary catalysts behind the excellent third quarter performance,” said CEO David W. Williams during a conference call Thursday.

At the end of September, about 80% of Noble’s available rig operating days were committed through the rest of the year, including 84% of the floating rig days and 83% of the jackup rig days. For 2014, an estimated 71% of the available rig days already have been committed, including 76% of the floating and 72% of the jackup rig days.

Noble has 10 rigs now running in the Gulf of Mexico, including three drillships.

“Our view of the offshore drilling business remains decidedly positive, with jackup and floating rig contract opportunities visible in a number of regions,” said Williams. “Many of the opportunities include contract durations ranging from one to three years, with isolated opportunities beyond three years. In the floating rig sector, ultra-deepwater capable rigs with advanced technical features are continuing to experience robust demand.

“Strong, sustained crude oil prices, a heightened focus by customers on exploration opportunities with an increasing interest in frontier locations, and the onset of a growth phase in field development programs are driving customer demand for the foreseeable future.”