The Obama administration’s U.S. Army Corps of Engineers (USACE) on Monday again delayed making a final decision on a 1,000-foot easement to tunnel under part of the Missouri River to complete the $3.8 billion, nearly 1,200-mile Dakota Access oil pipeline. 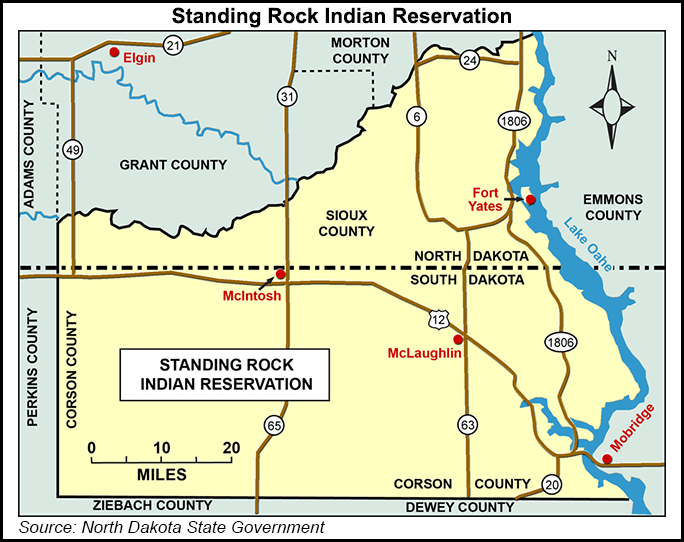 The latest setback for the project, which is more than 80% complete, prompted the pipeline’s backers to file two related lawsuits late Monday night in federal district court.

Energy Transfer Partners (ETP) and Sunoco Logistics Partners LP, backers of the four-state pipeline project to carry Bakken sweet crude oil to eastern, Gulf Coast and global markets, immediately criticized the continued delay of an approval that had already been granted earlier this year. Project opponents, led by the Standing Rock Sioux Tribe, stepped up their now-national protest efforts aimed at shutting down the project permanently despite its past regulatory and court vetting and nearly complete construction.

Although permitted by four states (North and South Dakota, Iowa and Illinois) and the USACE earlier, the departments of Interior and Justice, along with the Corps, in September pulled back the USACE easement for tunneling under a dammed portion of the Missouri River, Lake Oahe, within hours of a federal district court rejecting the Sioux tribe’s request for a temporary injunction stopping the construction. This spurred the current national protest encampment near the proposed water crossing in south-central North Dakota within a mile of the Standing Rock Sioux reservation.

In their court filings, ETP and Sunoco seek a judgment declaring that their project has the legal right-of-way to build, complete and operate Dakota Access Pipeline without any further action from the USACE. They asked the U.S. District Court for the District of Columbia to confirm that the Corps already has granted all of the relevant authorizations.

Meanwhile, opposition groups on Tuesday called for a “national day of action,” sending Native American tribal leaders who have been gathering in North Dakota to USACE offices in Washington, DC, New York City, San Francisco and Los Angeles, along with what protesters said are dozens of other cities nationally. They said the action is in response to alleged “increased violent repression” from law enforcement at the pipeline construction site in North Dakota.

While President Obama has publicly said that USACE was looking for an alternative route that would satisfy Native American tribal concerns, industry analysts like Christi Tezak, managing director at ClearView Energy Partners LLC, have speculated that the Obama administration may delay through the rest of its tenure and leave a final decision to President-elect Donald Trump’sadministration.

USACE’s latest move included reiteration that its early approval of the Dakota Access easement “met legal requirements,” but the Corps has subsequently decided that it still needs more discussion with the Standing Rock Sioux Tribe leaders and further analysis of the situation. Tezak had earlier predicted that USACE might continue to avoid a resolution of this case, and supporters of the project are now beside themselves.

“Today’s decision is yet another attempt at death by delay, and it is a stunning rebuke of the USACE, the federal civil service, four state governments and the rule of law,” said Craig Stevens, spokesperson for the Midwest Alliance for Infrastructure Now, a major supporter of the pipeline project.

“This extra-judicial, political decision is exactly why hard-working Americans across the country rejected a third Obama [Hillary Clinton presidential] term. Now the Secretary of the Army’s office is requiring even more consultations [with the Sioux]; why?”

While noting the latest delay was not all that the Sioux were hoping to hear, tribal President Dave Archambault II said Native Americans are “encouraged” and know that “President Obama is listening.” Archambault again criticized the state’s law enforcement tactics using troopers, and county officers, along with National Guard troops, to deal with thousands of protesters, many of whom have been arrested in recent weeks.

North Dakota Gov.-elect Doug Burgum in post-election interviews last week said he will not second guess the handling of the situation by current Gov. Jack Dalrymple. Both are Republicans in a state that voted overwhelmingly for President-elect Trump. Burgum did not speculate on what might happen if the protests are continuing when he takes office in January next year.

On a 3Q2016 earnings conference call last Thursday, executives from the pipeline sponsor, Energy Transfer Partners, confirmed that construction on the project was 84% complete and that they still expect to complete the new pipeline by early in the first quarter next year.