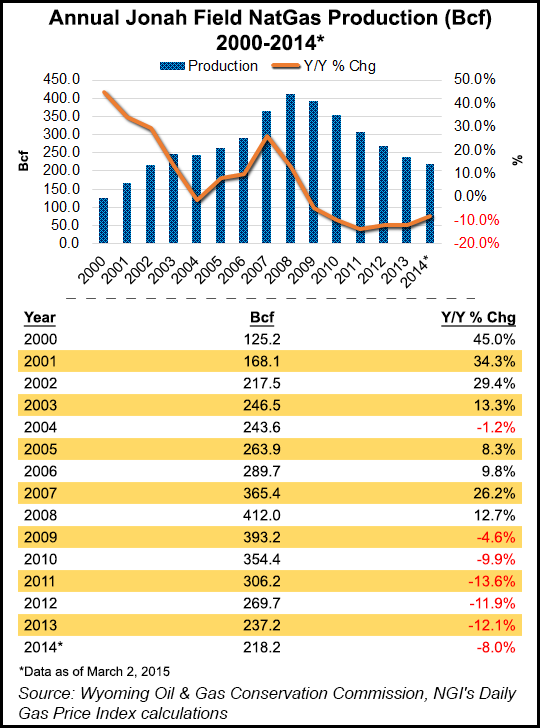 Earlier this year, PGE asked NW Natural to move ahead with land acquisition and permitting for the $125 million expansion. Kantor said the project will be designed to provide no-notice storage services to Port Westward.

The expansion will involve developing a reservoir to provide up to 2.5 Bcf of storage, a compressor station to increase injection/withdrawal capacities by 120 MMcf/d, and a 13-mile pipeline connected to the generation plant.

“In 2015, we will be working to obtain all the required permits and certain property rights, and assuming successful completion of all of those elements and the construction schedules, the potential in-service date would be in the 2018-2019 winter season,” Kantor said.

Those developments come at a time when NW Natural’s 2014 earnings results — down a little compared to 2013 — reflect problems with its storage operations, which have been plagued the company in recent quarters (see Daily GPI, Nov. 10, 2014).

While reporting overall net income of $58.7 million ($2.16/share) last year, compared to $60.5 million ($2.24) in 2013, Kantor said that although utility results were positive, “they were more than offset by a decrease in gas storage results primarily from lower revenues due to depressed market conditions in California and higher costs at the Gill Ranch [underground storage] facility.”

In the gas supply area, Kantor reported that NW Natural still has the ability under its gas reserves purchase from Encana Corp. (USA)’s Jonah Field properties in Wyoming (see Daily GPI, May 2, 2011) to drill new wells, but he is not sure any additional ones will be drilled in 2015.

“The way it works is that Jonah Energy Inc. proposes wells to us, and then we evaluate and make a decision on a well-by-well basis whether to proceed,” Kantor said in response to an analyst’s question. “Right now, there haven’t been any proposed to us, and I am not sure any will be this year.”

Even if the operator proposes some new wells, Kantor said for 2015 he would not expect a large number of potential wells.

“We also continue to look at a potential second gas reserves deal as part of an ongoing discussion with the Oregon Public Utility Commission [PUC] about what is the right amount of gas reserves [for utility ratepayers to support].” That is designated as the utility’s “hedging docket” at the PUC, he said.

“We hope to complete that docket this year, and that should tell us if we have the right amount of gas reserves in our portfolio,” Kantor said.