The U.S. Energy Information Administration (EIA) on Thursday reported an injection of 103 Bcf natural gas into storage for the week ended Sept. 23. The result exceeded expectations and matched the largest build of the season – posted the prior week. 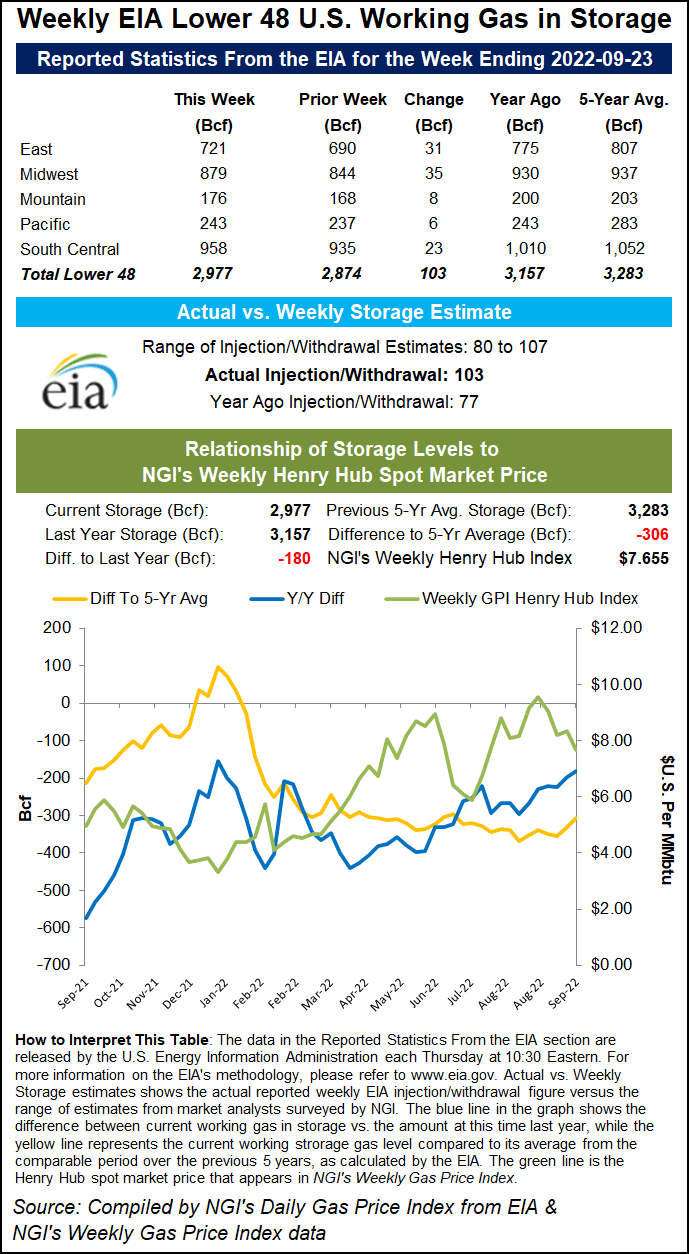 The print pressured Nymex natural gas futures. Just ahead of the 10:30 ET EIA report, the November futures contract, debuting as the front month, was down 22.5 cents at $6.730/MMBtu. It fell further to around $6.669 when the EIA data was released.

Prior to the report, results of Bloomberg’s survey showed a median injection projection of 93 Bcf, with estimates ranging from 85 Bcf to 107 Bcf. Reuters’ poll produced injection estimates that spanned 80 Bcf to 105 Bcf. It landed at a median of 95 Bcf.

For the year-earlier period, EIA recorded an injection of 86 Bcf. The five-year average injection was 77 Bcf.

A combination of rising production – U.S. output hit a record level of 101 Bcf/d last week – and fading weather-driven demand amid fall temperatures, has enabled utilities to stow more gas in storage for the coming winter after struggling to do so in recent months. The summer proved exceptionally hot, propelling robust demand throughout the season.

The increase for last week boosted inventories to 2,977 Bcf. That compared with the year-earlier level of 3,157 Bcf and the five-year average of 3,283 Bcf.

By region, the Midwest and East led with injections of 35 Bcf and 31 Bcf, respectively, according to EIA.

The South Central followed with a build of 23 Bcf. It included an 18 Bcf injection into nonsalt facilities and an increase of 5 Bcf in salts. Mountain region stocks increased by 8 Bcf, while Pacific inventories gained 6 Bcf.

Looking ahead to next week, early estimates submitted to Reuters for the week ending Sept. 30 ranged from injections of 87 Bcf to 119 Bcf, with an average increase of 96 Bcf.

That compares with an injection of 114 Bcf a year earlier and a five-year average of 87 Bcf.Analysts on the online energy platform Enelyst, however, said estimates for the next print could be revised upward, given the demand destruction imposed by Hurricane Ian this week in Florida and the Southeast.