Natural gas futures floundered on Wednesday as November took over as the front month and markets mulled waning weather-driven demand that could free up more domestic supply for storage ahead of winter. 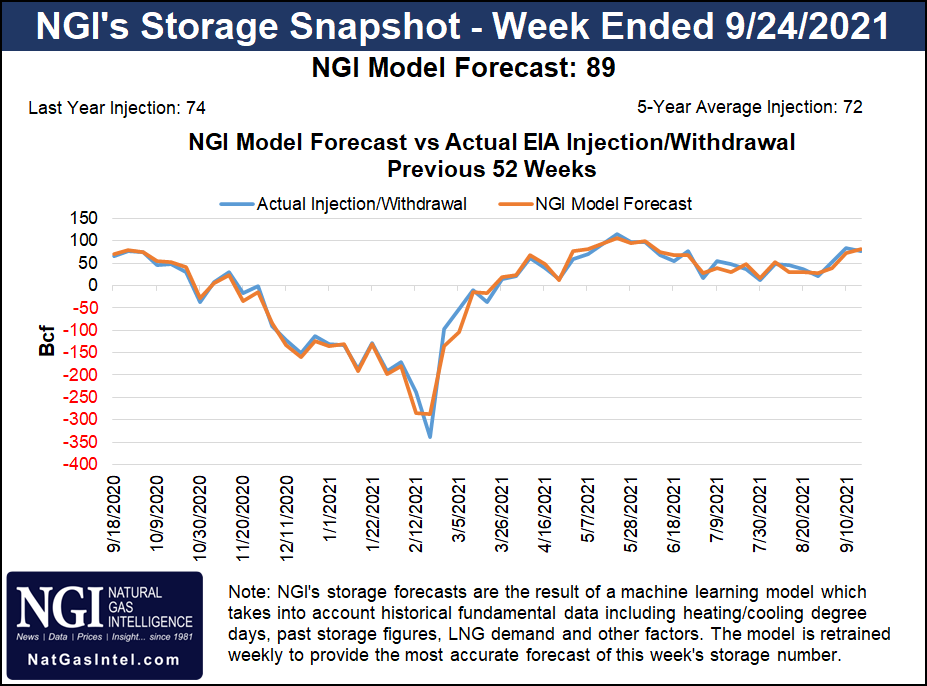 The October natural gas contract, which rolled off the board with Tuesday’s close, had surged more than 70 cents in its last two trading days. Analysts noted that bulls this year have often dominated trading ahead of expiration. However, the potential for a global energy crunch this winter has fueled a surge in international gas prices, and that rally has helped to propel U.S. futures this month.

With October’s expiration in the rearview, analysts said a pullback with November’s debut was not surprising, given expectations for mild weather through the end of September and into next month.

Forecasts “favor very warm weather in the northern half of the nation” over the next two weeks, keeping early-season heating degree days “well below normal, all while having a lack of heat in the southern U.S.,” minimizing cooling demand as well, Bespoke Weather Services said.

The firm said its long-range outlook points to light demand deep into the fall. “The pattern is so weak” that, assuming five-year normal conditions beyond the first week of October, the firm projects that next month would feature the third-lowest gas-weighted degree (GWDD) total of any October in its 41 years of data. It “is not out of the question that we make a run at October 2016’s record low GWDD count. This is driven by the La Niña base state currently in place.”

Now that October “expiration is out of the way, it will be interesting to see if we begin to focus more on the data here in the U.S, or if we continue to stay tied to price action over in Europe,” Bespoke added. “Strong volatility is surely not done,” however, “and in fact is likely just getting started.”

Indeed, global challenges – and the corresponding impact on demand for U.S. exports of liquefied natural gas (LNG) – have fueled multiple rallies in September and could drive further upside pressure.

Though summer heat is fading and winter chills are unlikely to settle in for several weeks, markets are looking for continued elevated LNG volumes to fuel energy needs in Asia and Europe. Supplies in Europe are lean and demand is surging in parts of Asia, led by power needs in China. This is pushing gas prices to record levels on both continents, galvanizing demand for U.S. LNG and supporting American gas prices.

She noted this helped drive Henry Hub gas futures up to new post-2008 records this week — above $6.00 in intraday trading Tuesday. “With the incredible run in global gas prices, U.S. export economics have looked extremely attractive.”

EBW Analytics Group noted Wednesday that in addition to Europe’s storage woes, China’s natural gas power demand has doubled in 2021 from last year. However, supplies have not kept up, resulting in “widespread power outages across at least 10 provinces.” This could drive LNG demand to record levels – and prices could follow suit.

“There are several breakpoints in the U.S. market that could help stop prices from reaching European heights, including leaving more ethane in the natural gas stream to functionally increase natural gas supplies and gas-to-oil switching in the power sector,” the EBW team said. “In an extreme scenario, however, U.S. prices may have to rise to global levels to reduce LNG exports and conserve supplies for domestic consumption.”

A Bloomberg survey found a median of 87 Bcf, with injection estimates ranging from 79 Bcf to 92 Bcf. The median forecast in a Reuters poll landed at a build of 88 Bcf, with a low estimate of 66 Bcf and a high of 92 Bcf.

NGI modeled a build of 89 Bcf.

The estimates compare with a build of 74 Bcf for the same week in 2020 and the five-year average of 72 Bcf.

For the week ended Sept. 17, EIA said utilities injected 76 Bcf natural gas into storage. That increased inventories to 3,082 Bcf, though stocks were below the five-year average of 3,311 Bcf.

Energy Aspects issued a preliminary injection estimate of 85 Bcf for the upcoming report. The firm modeled a 1 Bcf/d week/week increase in production for the report period.

Physical gas prices stumbled on Wednesday alongside abating weather demand and the pullback in futures.

National Weather Service (NWS) data showed rainy and cooler conditions over the Northwest and parts of the Rocky Mountains on Wednesday. Separate but similar weather systems were expected to move into Texas and the Midwest, as well as swaths of the South and Northeast, as the week wears on. This should lower temperatures into the 60s and 70 in many areas and drop demand for natural gas to power air conditioners.

Against the weather backdrop, prices declined across the country.

Looking ahead, the NWS is forecasting above-average temperatures over most of the Lower 48 next week. That is likely to translate into highs ranging from the 60s in northern markets to 80s in southern states – comfortable conditions that typically do not galvanize either heating or cooling demand.

On the maintenance front, the Cove Point LNG terminal in Maryland on Wednesday started the second phase of its annual fall upkeep work – a three-week project in total. The new phase, slated to last through Oct. 10, is focused on Cove Point engines 5, 6 and 7 at Pleasant Valley Station, resulting in outages on those engines, said Wood Mackenzie analyst Kara Ozgen.

The annual project was initially expected to cut feed gas to the terminal from 734 MMcf/d to zero, though Ozgen said flows were steady at 2 MMcf/d during the first phase of the project. With that initial part completed, she said, flows for Wednesday were estimated at 19 MMcf/d.