The Energy Information Administration (EA) reported a 58 Bcf injection into storage inventories for the week ending Oct. 19, above estimates that pointed to a build in the low 50s Bcf. 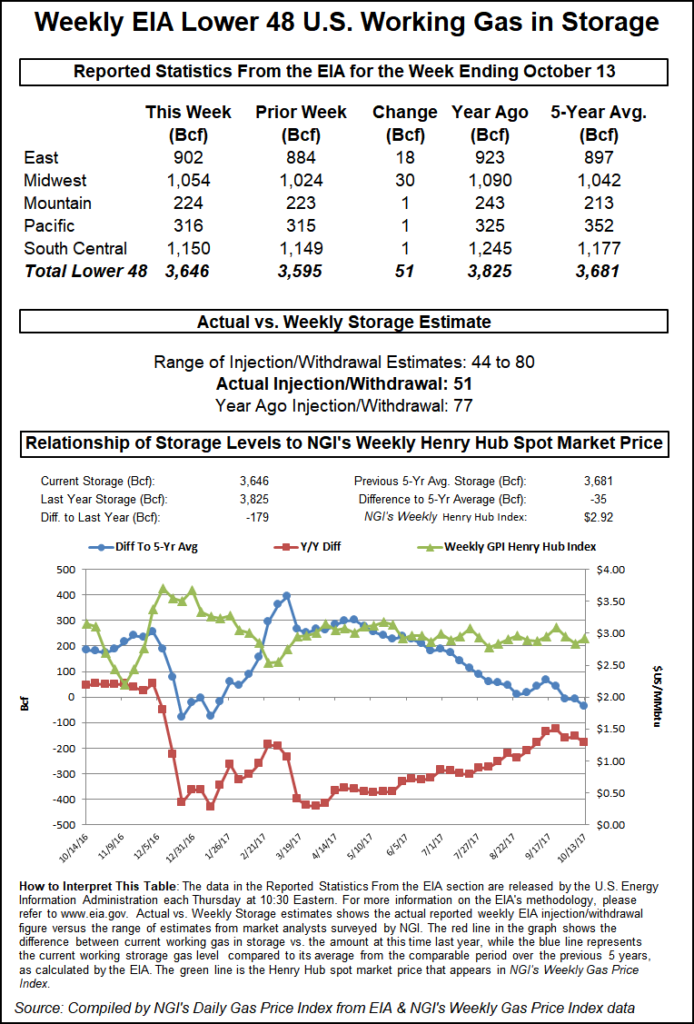 The EIA’s reported injection included a “non-flow-related” adjustment that decreased working gas stocks by approximately 5 Bcf in the South Central nonsalt region. This changed the implied flow to an injection of 63 Bcf to inventories for the week ending Oct. 19.

Market observers were puzzled by the reclassification as it was deemed to be non-flow related, with some theorizing it could have been a “fat finger” error in reported data or perhaps storage operator engineers realizing they couldn’t take as much of their gas out of the system and therefore calling it base gas instead of working gas.

Traders did not appear to view the storage build as supportive, at least initially. The Nymex November gas futures contract was trading about 4 cents higher before the storage report was released but then trimmed that gain to about a penny after the EIA print hit the screen. By 11 a.m. ET, the prompt month was back at $3.219, up 5.3 cents from Wednesday’s settle.

With the balances of the last few weeks, it’s hard to be overly concerned about aggregate storage levels heading into the winter given how loose the market is running, Meisel said. “The real worry is regional delivery issues on any significant cold in the heart of the winter.”

Wood Mackenzie analyst Gabe Harris, however, said that any build that is below the five-year injection with a 600 Bcf storage deficit heading into November “is pretty supportive. Last year, 63 Bcf was injected into storage, while the five-year average injection is 77 Bcf.

“I get excited about the low numbers and possibility of shortages in February as anyone,” but the last 10 days of big weather-adjusted injections “makes me very skittish. Production seems bigly,” Harris said Thursday on the Enelyst chat room hosted by The Desk.

For now, the purchases of salt cavern storage operators should keep some support for prices, he said.

Meanwhile, the market could still see sizable rallies if it can sustain any significant cold, Meisel said. “In the short-term, we’re seeing a race for molecules to fill those salt caverns in the South.”

Broken down by region, the EIA reported a 26 Bcf build in the Midwest, a 13 Bcf build into the East, a 2 Bcf withdrawal in the Pacific and a 24 Bcf build in the South Central region. Salt storage inventories grew by 15 Bcf, while non-salt grew by 10 Bcf, including the reclassification.