November natural gas forward prices fell an average 6 cents between Oct. 20 and Oct. 26 as record production and elusive cold weather forecast for the coming weeks weighed heavily on a market anxious to get the winter heating season underway, according to NGI’s Forward Look. 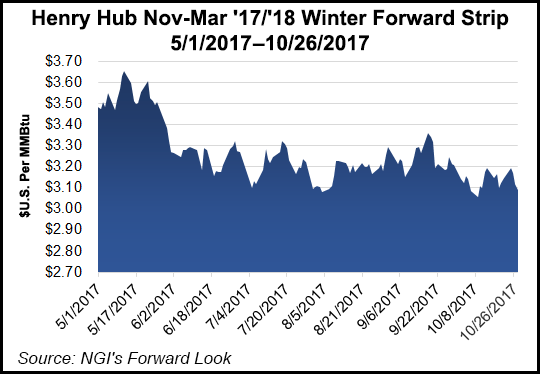 The week started on a positive note as earlier weather outlooks showed much cooler weather arriving over the weekend and even colder conditions in the 11- to-15-day forecasts. After a run-up to $3.02, the Nymex November futures contract ultimately settled last Monday at $2.991, up 7.6 cents on the day.

The market took somewhat of a breather on Tuesday, but a warmer shift in the longer-term weather outlook sent November down more than 5 cents on Wednesday. The prompt month slipped again on Thursday, settling down 2.9 cents at $2.89.

The sell-off didn’t end there. Friday morning brought about an even steeper decline in the expiring Nymex November contract. By mid-day, the prompt month had dropped to $2.78 and the contract eventually rolled off the board at $2.752, down 13.8 cents from Thursday’s regular session close.

“This is pretty brutal,” said NGI Director of Strategy and Research Patrick Rau.

“It seems like to me that this is a case of now that the Nov. 1start of the winter season is just around the corner, the market is realizing we are probably off to a good start to the winter supply wise.”

From a technical standpoint, the falloff in November is so extreme that it has pierced below the 20-day Bollinger Band. But Rau pointed out that technical indicators don’t matter as much on expiration day since traders are going to have to square their accounts, no matter what it takes to do that.

Meanwhile, traders are also eyeing the December futures contract, which is now down even further below the bottom of its respective 20-day Bollinger Band, Rau said. Perhaps more significantly, December has dropped below major support marked by its previous two reactionary lows in the lower $3 range. The next reactionary low point would be December’s all-time life of low trade of $2.64 posted last December.

“It’s certainly not a great start to the winter heating season,” Rau said.

Indeed, even with natural gas storage inventories trailing historical levels, record production appears to be giving the market confidence heading into what could be another warm winter. On Thursday, the Energy Information Administration reported a 64 Bcf injection into inventories for the week ending Oct. 20, mostly in line with expectations. The injection was below last year’s 77 Bcf injection and the 81 Bcf five-year average.

“From a weather-adjusted perspective, the 64 Bcf injection was certainly not a bearish data point,” Mobius Risk Group analysts said. “Compared to the same week last year, and the five-year average, the injection was 1.5 Bcf/d lower. Normalizing the injection for weather also highlights a tight (bullish) year-over-year comparison.”

Still, with production near record levels around 75 Bcf/d-plus and climbing, and additional takeaway capacity expected to come online by the end of the year, the market appears confident about meeting winter demand.

Mother Nature is only pressuring markets further. Overnight Thursday, weather guidance significantly increased confidence and intensity in ridging across the East Coast in both the medium and long-range as the market is once again shedding gas-weighted degree days (GWDD) from the going forecast, according to forecasters at Bespoke Weather Services.

Climate guidance appeared to indicate that warmth could have more staying power than previously expected as well, with atmospheric indicators pointing to a potentially sustained period of warmth at least into the middle of the month, the Harrison, NY-based forecaster said. The result, then, is that recent GWDD losses have proven to be just too much for the natural gas market as prices have pulled back significantly.

“Natural gas prices are plummeting into expiry today for the first time in over a year, as in the past we have seen a number of bullish expiry days with prices recently closing just below the $3 level,” Bespoke said.

Still, the forecaster said it continues to see enough bullish risks in the long-range that a pattern flip is possible and cooler trends into the middle of November could shoot up on guidance to stabilize prices, “but it is clear that overnight shifts were bearish enough to limit any price upside at least today.”

Taking a closer look at the markets over the past week can be a little deceiving as the Nymex November futures contract slipped just 2 cents from Oct. 20-26 to $2.89. December futures were down 6 cents to $3.05 and the balance of winter (December-March) was down 7 cents to $3.14.

On a national level, November forward prices fell an average 6 cents, December slid an average 9 cents and the balance of winter (December-March) dropped an average 8 cents, according to Forward Look.

Forward prices on a national level were brought lower by steeper declines in the Northeast. It was the second week in a row that Northeast prices posted substantially steeper losses than the rest of the country as generally bearish weather patterns are expected to continue in the region through the middle of November at least.

Putting additional pressure on the Northeast markets is planned maintenance on the Texas Eastern Pipeline (Tetco) system that is now scheduled to begin service on Nov. 1. The work on Tetco’s Sarahsville Compressor in Guernsey County, OH, was originally scheduled to begin Oct. 26. Operational capacity through the compressor would be reduced to 522 MMcf/d during this maintenance event, which is estimated to last between seven and 10 days.

For the last 30 days, flows at the compressor have averaged 670 MMcf/d, with a max of 711 MMcf/d on Oct. 2 (189 MMcf/d above the projected operating capacity), according to data and analytics company Genscape Inc.

Production-region pricing locations also continued to weaken considerably. At Dominion South, November forwards were down 33 cents from Oct. 20-26 to reach $1.69; December was down 14 cents to $2.45 and the balance of winter (December-March) was down 11 cents to $2.63, according to Forward Look.

Meanwhile, Southern California points continued to strengthen for November amid ongoing volatility in the cash market as a result of unseasonably hot weather during the week and various restrictions on supply.

On top of the various limitations already in place, SoCal’s Honor Rancho storage field was scheduled to begin maintenance on Monday (Oct. 30), which could put additional strain on the system.

Honor Rancho is the largest of SoCal’s four fields by current working capacity, at 27 Bcf. Aliso Canyon was previously the largest at 86.2 Bcf, but it has since been directed by the California Public Utility Commission to remain at or below 23.6 Bcf.

Aliso Canyon withdrawal should be available during this span if “needed for system reliability,” according to SoCal’s maintenance schedule. In addition, the Playa del Rey field’s 2.4 Bcf of working capacity is full (and thus cannot take further injections), but unplanned well availability issues are currently preventing withdrawals. There is also no reduction affecting Goleta’s withdrawal capacity, although its injections are limited by 90 MMcf/d, Genscape said.