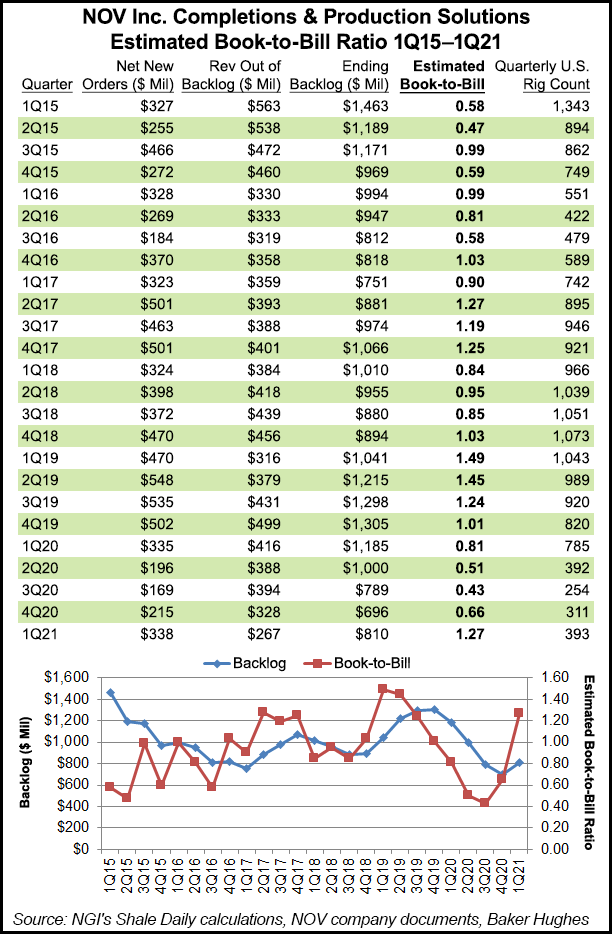 Williams, who held court to discuss the first quarter during an hour-long conference call, said the latest results reflected the “full impact of the shockwave” of 2020. Adding insult to injury, the first quarter “was further impacted by other factors,” he said.

“Severe winter weather and power outages in Texas and Oklahoma led to 63 NOV facilities being shuttered for a week or more,” he told analysts. NOV had signaled in March that the February freeze would weigh on first quarter results.

“Additionally, new pandemic control measures flared up overseas, which shut down another couple of large plants and disrupted our supply chains for certain raw materials, notably fiberglass and resin. And as if that weren’t enough, the quarter also ended up being impacted by higher costs on to projects related to poor execution on our part.”

In one case, “a new pipe design has proven more expensive to manufacture than expected,” while in another case an “offshore platform component was delayed because our engineering took longer than expected. Both have been corrected.”

In general,  the first quarter reflected “the preceding nine months of crashing oil demand and a virtual cessation of capital spending, offset by substantial downsizing and cost reductions. We believe this downcycle is the worst our industry has ever seen…”

While the recovery “has begun taking hold in many markets,” the average first quarter rig counts were down 46% year/year for North America and 31% for the offshore.

Despite the challenges, “the final quarterly results slightly exceeded our March forecast due to better progress on cost reductions,” Williams said. “This is important. More and more green shoots are emerging in the oilfield, particularly in Wellbore Technologies and particularly in North America. Although we still face headwinds in many markets, our confidence continues to mount that the worst is behind us.”

Overall, first quarter revenues fell 34% year/year and were off 6% sequentially at $1.25 billion.

North American oilfield activity continued to recover in March, with revenue up sharply from January for some of the U.S. businesses. International results “began to point to early signs of a recovery as well,” he said. “Nevertheless, the first quarter sequential decline in capital equipment revenues reflect the pummeling our backlog took in 2020,” which led to a 6% consolidated revenue decline. The result was “unacceptable and is prompting further cost reductions.”

NOV, which provides oilfield capital equipment and spares, said its exploration and production (E&P) customers “are sticking to the tried-and-true survivor playbook of cannibalizing equipment spares and consumables, deferring maintenance, reducing spending spending to bare substance levels and holding precious cash.”
By last fall, all of the idled equipment had been cannibalized, with “every stacked rig” an incremental source for drill pipe and tools for E&P customers.

“That same dynamic applies across all categories of oilfield equipment when utilization collapses and service companies fight to keep the lights on.”

Restocking To The Rescue

Williams mixed in some history to signal better days ahead.

“One hundred sixty years of oilfield history demonstrates that this dynamic is always temporary.” The lack of idle equipment available as activity resumes means E&Ps will have to restock to improve utilization.

“We are beginning to see the early signs of this in certain areas,” as rigs and fracture fleets go back to work. “Idled, stripped drilling rigs must have cannibalized pumps and handling tools replaced to go back into service. This rebuilding, restocking and reactivation phenomenon occurs at a time when service company desperation is obviating and optimism is growing with rising oilfield activity.

“We know this because you know we have lived it through recovery cycles like this in the past,” Williams said. “Customers will soon start to worry about nontrivial cash investment required to reactivate rigs and equipment.”

NOV’s Wellbore Technologies segment generated revenues of $413 million in the latest period, an 11% sequential but down 40% year/year. The sequential increase in revenue was driven by improving drilling activity in the Western Hemisphere, partially offset by seasonality in the Eastern Hemisphere. Operating loss improved $64 million sequentially to $14 million, or 3.4% of sales.

Completion & Production Solutions (CPS) revenue was $439 million in 1Q2021, down 20% sequentially and 35% from a year earlier. The sharp sequential decline was attributed primarily to “severe weather disruptions, some project delays, Covid-19 shutdowns in Southeast Asia and raw material shortages for the segment’s Fiberglass business unit. Operating loss improved $14 million sequentially to $17 million, or 3.9% of sales.

New orders booked in CPS during the quarter totaled $338 million, representing a book-to-bill of 127% when compared to the $267 million of orders shipped from backlog. Book-to-bill for the quarter was 115%. The backlog for capital equipment orders at the end of March was $810 million.

In the Rig Technologies segment, revenue declined 23% year/year and was off 1% sequentially at $431 million. The decline came from “soft orders and lower backlog in the segment’s rig equipment business,” which was partially offset by increased demand for offshore wind equipment and iprogress on two rigs to be built at the new manufacturing facility in Saudi Arabia.

Operating loss in Rig Technologies improved $124 million to $8 million, or 1.9% of sales. New orders booked totaled $112 million, representing a book-to-bill of 59% when compared to the $190 million of orders shipped from backlog. At the end of March, the backlog for capital equipment orders was $2.59 billion.

Among the achievements in the first quarter, NOV said it won a contract to provide internal coating and pipeline connections for a gathering system in South Texas. It also was awarded a contract to supply large-diameter casing for the Gulf of Mexico North Platte project, said to be the first of its kind.

During the quarter NOV also introduced an updated design of its IntelliServ wired drill pipe technology that it said simplifies the process of embedding the coil and data cables. The system shortens the manufacturing process to 20 minutes from 20 hours, according to the company.

“In Mexico, a large service contractor achieved its best drilling performance ever in the country with the Fuego bit, reducing drilling time in every hole section to save more than 52 hours.” On another Mexico project, NOV provided a 14.5-inch Fuego drillbit “to enhance the durability and rate of penetration (ROP) while drilling through multiple formations. The bit beat the ROP benchmark by 80% and saved approximately 90 hours in drilling time for the operator.