Natural gas forward prices continued to fall at the front of the curve during the trading period ending Wednesday (July 14), pressured by inconsistent summer weather and fluctuating production. However, Northeast markets rebounded as another heat wave drove up regional demand, stalling a more pronounced rebuilding of storage inventories that is needed ahead of the winter, according to NGI’s Forward Look. 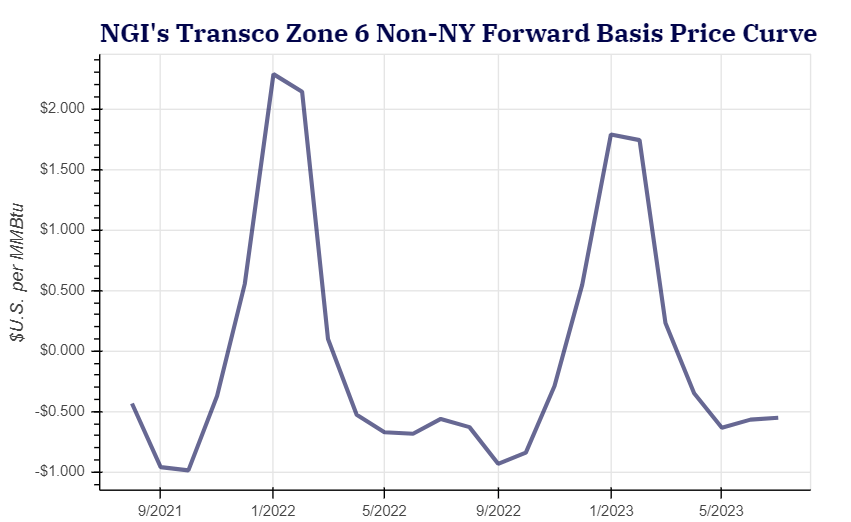 Concerns over supply adequacy were reflected in other regions too, driving small gains at the majority of U.S. pricing hubs further out the forward curve, Forward Look data showed. Winter prices rose 3.0 cents on average, while summer 2022 prices added an average of 2.0 cents.

Meanwhile, market observers and analysts have been more vocal in recent weeks about the need for producers to step up to avoid a potential supply shortfall this winter.

On Thursday, participants on The Desk’s online energy chat Enelyst discussed the latest round of government storage data by the Energy Information Administration (EIA). Some said the East inventories rose more than expected, but the week ending July 9 included the Fourth of July holiday, which was a bit trickier to project.

The EIA reported that East stocks increased by 22 Bcf for the week; most estimates had the build below 20 Bcf. Regional inventories hit 543 Bcf, which was 19% below year-ago levels and about 9% below the five-year average, according to EIA.

The tepid pace of injections since April puts total U.S. stocks on pace to end October at around 3.4-3.6 Tcf, according to early estimates. Even with the next couple of EIA reports expected to bring similarly small injections, Enelyst managing director Het Shah said producers appear to be holding out for $4.00 gas before they bring online more supply.

However, the Enelyst chat participants were divided on whether prices would reach the $4 level ahead of the winter season, or when the first blast of chilly air arrives in the Lower 48.

In the meantime, there is a slew of pipeline maintenance events that appears to be taking a toll on Appalachian production, albeit temporarily.

Transcontinental Gas Pipe Line Co. was scheduled to conduct a one-day maintenance Thursday on Station 520 that could result in an outage and bring capacity to zero. Wood Mackenzie analyst Kara Ozgen said this would cut about 251 MMcf/d of gas flow through the station. In the past 30 days, the “LEIDY LINE STATION 520 MP 170.39 NL” flow meter has reached a maximum of 469 MMcf/d and averaged 332 MMcf/d.

Meanwhile, Tennessee Gas Pipeline continues to make emergent repairs at Station 317, curtailing flows through the station by around 210 MMcf/d. The pipeline has indicated it would keep the compressor station offline until repairs are completed, and no end date has been provided.

The two maintenance events are the latest in a string of curtailments in Appalachia this summer. Earlier this month, Columbia Gas Transmission (TCO) reported that about 2 Bcf/d of output had been wiped off its system following an upstream issue at MarkWest Energy Partners LP’s facilities in West Virginia.

However, analysts pointed out that Appalachia production fell much more than that.

At the same time, Texas Eastern Transmission’s 30-inch diameter line was operating at a reduced pressure. The TCO and Tetco issues have since been resolved.

Nevertheless, the fluctuations in output were reflected in regional forward curves. Transco Zone 6 non-NY August forward prices climbed 4.0 cents over the July 8-14 period, settling at $3.226, according to Forward Look. This is still a substantial 43.5-cent discount to benchmark Henry Hub prices, though. Further out the curve, the balance of summer (August-October) picked up 8.0 cents during the period to average $2.860, 80 cents back of Henry Hub.

As the region is typically winter peaking, the higher prices are not a surprise. Still, a look at last year’s prices for the winter revealed that spot gas averaged only around $2.850 for the November-March period. In fact, prices only spiked above $4.00 briefly in mid-December, late January and again in mid-February. Even more interesting, cash prices were under $1.00 on several days in early November, NGI data showed.

Upstream in Appalachia, gains were larger at the front of the forward curve. Transco Leidy August prices jumped 9.0 cents from July 8-14 to sit at $2.749, according to Forward Look. The balance of summer also rose 9.0 cents, averaging $2.560, while the upcoming winter strip was up 8.0 cents to $3.020.

Meanwhile, there is at least some expectation that over the long term, Appalachia production may make a meaningful comeback.

Developers of the PennEast Pipeline, a 1 Bcf/d proposed conduit to move supply into New Jersey and parts of Pennsylvania, were tossed an olive branch by the U.S. Supreme Court. The high court ruled last month that the joint venture may use federal eminent domain power to condemn and acquire 42 parcels in New Jersey to complete the 120-mile interstate pipeline project.

PennEast had petitioned the high court in 2020 to review a lower court ruling. That ruling concluded that a FERC certificate issued under the Natural Gas Act (NGA) did not allow a private company to use eminent domain to seize state-owned land. Federal Energy Regulatory Commission authorization under the NGA, however, generally allows private operators to take property by eminent domain. The Supreme Court agreed.

“PennEast is among the greenfield projects that have faced some of the staunchest opposition,” Nasta said. “It’s also one of few still left in the fight to cross the finish line.”