With Marcellus/Utica shale producers still clamoring for exits from the gas-bloated region, numerous pipelines have been stepping up with capacity offers on their systems. 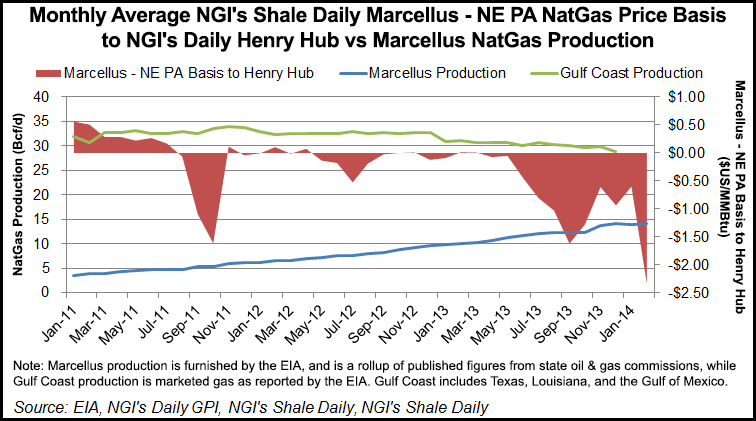 This week, TransCanada Corp.’s ANR Pipeline is holding an open season for southbound flow on its Southeast Main Line (SEML) from rate zone ML-3 to the ML-1 tariff rate zone near Eunice, LA (see Shale Daily, March 10). It’s only the latest step in ANR’s plan to capitalize on growing Northeast production, even though the pipeline doesn’t tap directly into the Marcellus or Utica, yet.

“Several years ago we obviously saw this coming, like most people did,” John Hampton, ANR director of business development, told NGI’s Shale Daily. “What could we do as ANR Pipeline? We are not in the Marcellus or Utica basins; we’re farther to the west.”

The first step was reversal of ANR’s Lebanon Lateral (see Shale Daily, Nov. 8, 2013), a 350,000 Dth/d project that is slated to come online in early April, Hampton said. The lateral runs from ANR’s mainline in Indiana to Lebanon, OH, where it has connections with Texas Eastern Transmission, Dominion and Columbia Gas Transmission.

“Of course, Dominion, Columbia, Texas Eastern are all up in the Marcellus/Utica area,” Hampton said. “So we thought as they start getting to the point where they need to reverse their systems to help…get gas out of the Utica/Marcellus, then we would have an opportunity to tie into some of that production and help move that to our markets or south to the Gulf Coast.”

Next is the Glen Karn 2015 Project, which adds 133,673 Dth/d of capacity to the Lebanon Lateral, to provide service on ANR from its interconnection with Texas Eastern at Glen Karn, OH, with a planned in-service date of Nov. 1, 2015 (see Shale Daily, Sept. 25, 2013). The in-services would coincide with that of Texas Eastern Transmission’s Uniontown to Gas City (U2GC) Expansion Project, for which the Spectra Energy pipeline filed this week at the Federal Energy Regulatory Commission (FERC).

That all adds up to more than 1.6 Bcf/d of capacity out of the Marcellus/Utica. “So we’ve been talking to a lot of parties to sell that much capacity,” Hampton said, “and they’re telling us they have more interest in moving on ANR beyond that.”

Once Appalachian gas gets onto the ANR system, it can go north to the Midwest and Chicago or south to the Gulf Coast. Lately, producers have been asking ANR about a greenfield project, and Hampton said the pipeline is considering a pipeline that would start in the Utica/Marcellus area and connect with the existing ANR system.

“We’ve had enough interest that we’re going to try to get some kind of open season out there as quickly as we possibly can,” he said. “I don’t know if that’s going to be for the greenfield project or just further expansions on our system, or a combination of the two.”

Texas Eastern’s U2GC project would entail compressor and meter station modifications to allow for bidirectional flow in Indiana, Ohio and Pennsylvania with capacity up to 425 MMcf/d. Like ANR’s Glen Karn project, the target in-service date is Nov. 1, 2015.

According to Spectra, U2GC has sufficient shipper commitments to proceed and plans to provide “firm transportation service from the supply-rich area west of Uniontown, PA, to the existing interconnect with the [Southern Union Co.] Panhandle Eastern Pipe Line system near Gas City, IN, for further redelivery to markets in the Midwest.”

Also this week, Columbia Gas Transmission launched a nonbinding open season through April 4 for capacity on its WB Xpress Project. It would move Appalachian gas, mainly along the pipeline’s WB line, to eastern points, including Loudon, VA, the Cove Point Pipeline, and into Transco Zone 5, as well as western points including Broad Run, WV (into Tennessee Gas Pipeline for Gulf Coast access), Leach, TCO Pool. “The project’s capacity to eastern delivery points will range between 500,000 Dth/d to 1.2 Bcf/d, and the project’s capacity to western delivery points will range between 400,000 Dth/d to 800,000 Dth/d,” the pipeline said.

Dominion Transmission Inc. is just wrapping up an open season for its Sabinsville to Cornwell (S2C) Project. Through modifications and upgrades to existing facilities, S2C would provide incremental firm service from an interconnect with Tennessee Gas Pipeline in Tioga County, PA, to the Cornwell interconnection with Tennessee in Kanawha County, WV. Capacity could be available as early as November 2016.

Natural Gas Pipeline Company of America LLC recently held an open season for potential reversal of part of its Gulf Coast mainline to move gas from the Marcellus/Utica shales to the Gulf Coast. The Kinder Morgan subsidiary said the expansion would increase its capability to flow up to 750,000 Dth/d of incremental volume from the Rockies Express Pipeline (REX) interconnection at Moultrie, IL, to points south on its mainline, through the reversal of some existing lines that are currently flowing south to north (see Shale Daily, Feb. 19). A spokesperson told NGI’s Shale Daily this week that the open season garnered “significant market interest” and it is evaluating the responses.

And REX, which is owned by Tallgrass Energy Partners LP, Sempra U.S. Gas & Power and Phillips 66, is seeking approval from FERC to reverse the flow on its line from Audrain, MO, to Clarington, OH, to provide another exit to market for Marcellus gas. In light of growing Marcellus production, REX could be expanded to provide 2.5 Bcf/d of westbound capacity (see Shale Daily, Jan. 30).

Williams’ Transcontinental Gas Pipe Line system, or Transco, recently received binding commitments from nine shippers for 100% of the 1.7 million Dth of firm capacity on its proposed Atlantic Sunrise expansion. The project would connect Marcellus gas in northeastern Pennsylvania with markets along the Atlantic Seaboard. The project is expected to be in service during the second half of 2017 (see Shale Daily, Feb. 20).

“The proposed pipeline reversals would likely have additional implications on the U.S. Gulf Coast, which is still a major source of U.S. production, despite several years of gradual decline,” said Patrick Rau, NGI director of Strategy and Research. “The more gas that flows into the Gulf Coast, the more Gulf Coast production could be displaced, everything else being equal.

“However, an increase in petrochemical demand in the Gulf Coast, along with emerging gas liquefaction and export capacity in the area, more pipeline exports to Mexico, and additional deliveries west to California and east to serve growing gas-fired power generation in the U.S. Southeast are all possibilities to absorb the excess Gulf Coast supply,” Rau added.