To the consternation of industry and North Dakota officials, the Mandan, Hidatsa and Arikara (MHA) American Indian tribes on Fort Berthold Reservation have established a regulatory commission and leaders intend to oversee future oil and natural gas activities, where production currently represents about one-third of the state’s 1.1 million b/d output. 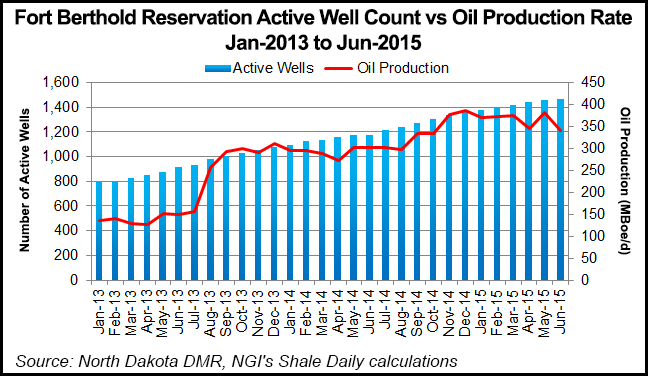 MHA Fort Berthold’s West Segment Regulatory Commission has established regulations for the industry to follow in its ongoing operations on the reservation. The head of the new regulatory body, Ted Lone Fight, told media the MHA has the full authority to regulate these activities on the reservation.

The Department of Mineral Resources (DMR) on Wednesday sent an inspector to one of the tribes’ informational meetings “to get a better understanding as far as what it could mean for our inspectors/inspections,” a DMR spokesperson said.

The oil industry, through officials at the North Dakota Petroleum Council (NDPC), said it disagreed with the tribal leaders’ plans, noting an added layer of regulation could slow production and ultimately hurt the Fort Berthold tribes.

As production from the reservation lands has become a more significant part of North Dakota’s oil boom, making it the second-largest producing state (see Shale Daily, April 28, 2014), the MHA leaders have outlined various plans for extending tribal authority over oil and gas activities, including imposing a fee on the amounts of wellhead flared wet gas on the reservation (see Shale Daily, Aug. 11, 2014).

“We’re still awaiting more details on the proposal,” by the tribes, “but we have expressed some caution toward additional layers of bureaucracy,” an NDPC spokesperson told NGI‘s Shale Daily on Monday. “The industry already follows the many state, federal and tribal regulations in place, and any additional bureaucracy will no doubt impact the industry’s ability to operate in this new low-price environment, and thus, the availability of jobs within the industry.”

In the latest production report in June by the state Department of Mineral Resources, eight drilling rigs were counted as still operating on Fort Berthold, with April production hitting 340,478 b/d. There were 1,471 active wells on the reservation.

At the end of April, 32 wells were awaiting completion and 493 new approved drilling permits, with what the state estimates are nearly 2,000 additional future well sites.