Oil and natural gas production in North Dakota’s Bakken Shale shot up in January, but state officials still expect to see a downward trend for most of the year before another increase in the fourth quarter. 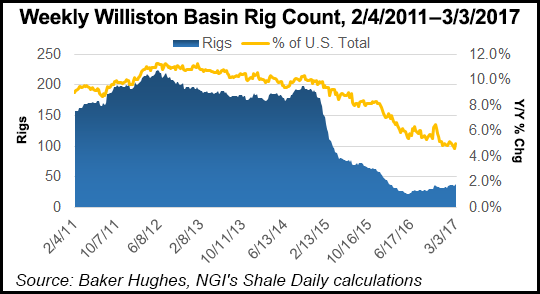 “Expectations are that production will continue to fall through the middle of this year; an uptick in activity in May and June won’t turn into increased production numbers until the fall,” Helms said.

“When we started the new year, the expectation was that rig counts would be in about 30, 50 and 55 for 2017, ”18 and ”19, respectively, but the forecast now is 40, 50 and 55, respectively, so we have seen a significant uptick in rig count in the last two months, and there are a lot of operators talking about adding a significant number of rigs through the end of this year and we’ve seen them act on that,” said Helms. For example, Marathon Oil Corp. began the year with one rig and has added six since.

“There is a lot more optimism, cash flow and capital available now,” he said.

Since December, rig counts have fluctuated, but they were at 44 on Wednesday from 38 in January and 40 in December, with stabilizing West Texas Intermediate (WTI) crude oil prices.

“Operators are shifting from running the minimum number of rigs to incremental increases throughout 2017 as long as oil prices remain between $50-60/bbl WTI,” Helms said.

“The number of well completions decreased significantly from 84 in December to 54 (preliminary) in January,” he said. “Oil price weakness is anticipated to last into the second quarter this year.” Bakken crude on Wednesday was priced at $41.50/bbl after averaging $42.74/bbl in February, he said.

During a webinar to report the latest statewide production statistics, Helms and Justin Kringstad, director of the state Pipeline Authority, emphasized that the Bakken well economics have continued to improve over the past five years. As a result, break-even prices in the core production counties have dropped significantly.

In the core counties, “the cost for drilling wells [has dropped from anywhere from $9-20/bbl,” Helms said. “The Bakken is continuing to evolve as an even more economic play, as opposed to some concerns about it being nearing its end.”