While opponents of Energy Transfer LP’s Dakota Access Pipeline (DAPL) have been seeking a shutdown of the line after a federal judge vacated a key permit last year, advocates of the controversial oil conduit are warning of major economic damage to stakeholders should operations cease. 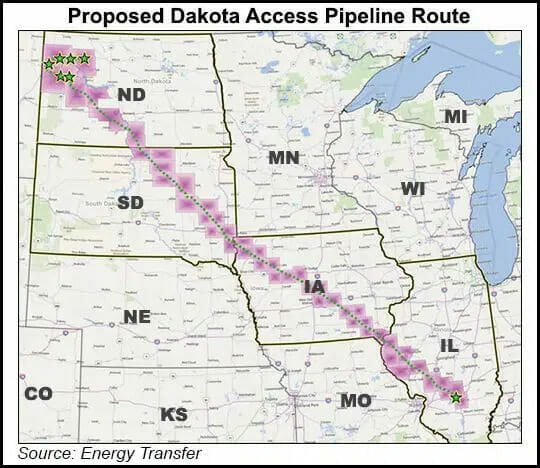 In a filing submitted Monday to the U.S. District Court for the District of Columbia, DAPL’s counsel said in the event of a shutdown oil producers could lose anywhere from $3.0-5.4 billion in 2021 alone. In addition, without the project, North Dakota stands to lose 14,540-24,090 jobs, it noted.

In a declaration attached to DAPL’s filling, Chairman Mark N. Fox of the Mandan, Hidatsa and Arikara (MHA) Nation in the Fort Berthold Indian Reservation in North Dakota, outlined “significant financial, environmental and safety harms” that would result should oil cease flowing through the 570,000 b/d pipeline.

“The MHA Nation’s economy is heavily dependent on oil and gas development,” Fox said. “Oil production on our Reservation is a critical source of governmental revenue for the MHA Nation. More than 80% of our tribal budget in the current fiscal year comes from oil and gas royalties and tax revenue.

In a separate filing, lawyers for the state of North Dakota asked the court to grant a motion to intervene in the proceedings. They cited a lack of confidence in the Biden administration’s “willingness to defend” DAPL’s continued operations.

The project “is of particular concern to North Dakota, whose sovereign interests and those of its residents hang in the balance,” the state’s counsel wrote. “…North Dakota cannot be confident that the federal defendant will continue to be a zealous advocate for the continued and safe operation of DAPL, which, directly and indirectly, is the source of almost a quarter of the state’s revenues and thousands of jobs in the State.”

DAPL’s filing cited projections showing a loss in 2021 of $770 million to $1.4 billion in tax revenues for North Dakota from oil production.

Meanwhile, Native American tribes led by the Standing Rock Sioux have asked the court to grant an injunction suspending operations of DAPL. This comes after U.S. District Court Judge James Boasberg last summer vacated the pipeline’s authority to cross under Lake Oahe via a right-of-way administered by the U.S. Army Corps of Engineers.

Pipeline opponents have called for a halt to DAPL operations pending the completion of an environmental review. However, a January ruling by the U.S. Court of Appeals for the D.C. Circuit upheld continued operations on the line. Earlier this month, the Army Corps under the Biden administration revealed that it would not seek to enforce the project’s vacated easement, disappointing DAPL’s opposition.

“We have long argued that the best shot the Tribes challenging the project had of succeeding in stopping DAPL’s operation was through the Corps’ exercise of discretion under President Joe Biden’s administration to seek ‘enforcement’ of the pipeline’s trespass at Lake Oahe in the absence of a valid permit,” analysts at ClearView Energy Partners LLC wrote in a note to clients Tuesday regarding the latest DAPL court filing.

“In the wake of the D.C. Circuit’s ruling to uphold the vacatur of the easement in January, we wrote that it was not clear to us whether the Tribes had met the criteria” for an injunction, they wrote.

The 1,172-mile DAPL, which began operations in 2017, transports crude oil from the Bakken to refineries in the Gulf Coast and Midwest, and to other downstream markets.