North Dakota exceeded its monthly production level projections for April, but it may be losing its bragging rights to New Mexico as the second largest oil producing state. 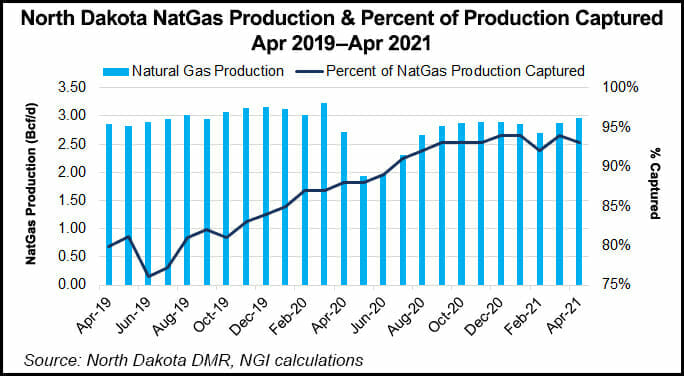 “At best we’re in a foot race for second with New Mexico, and at worst, they’ve replaced us, and that is an interesting development in terms of where North Dakota and the Bakken sit.”

The Energy Information Administration reported Monday that New Mexico, which shares a prolific slice of the Permian Basin with Texas, in March produced the most oil and gas on record. Oil output averaged 1.16 million b/d, while gas production climbed to 6.19 Bcf/d.

“Our drilling rigs are outpacing our completion crews, so we saw wells waiting on completion go up by more than a hundred in April,” he said. Total DUCs rose to 731. “We expected in April to begin drawing that inventory down,” but the rig count went from 15 in April to about 20 currently. Hydraulic fracturing (fracking) crews also have declined slightly, down by one to eight running today.

“It is a little concerning that field inspectors are reporting only eight frack crews out there, so that is going to limit our ability to grow production.”

There also was no seismic activity in the Bakken, a “very significant” point, Helms said. “That’s an indicator that companies, if they are looking at future development, are only looking at spacing units that already have a well on it.”

Some leasing activity has occurred on the fringe of the Bakken, particularly near Dickinson, ND, “as companies tend to look at the economics of three- and four-mile laterals and some of the new fracking technologies,” Helms said. That could lead to some new seismic activity in undrilled areas, but “everyone is playing this close to the vest right now.”