For the first time in more than four years, oil/natural gas production in North Dakota’s Bakken Shale play declined for two consecutive months, but the state’s chief regulator said Tuesday he expects things to turn around when June statistics are released. In the meantime, further monthly declines of 1-2% are expected. 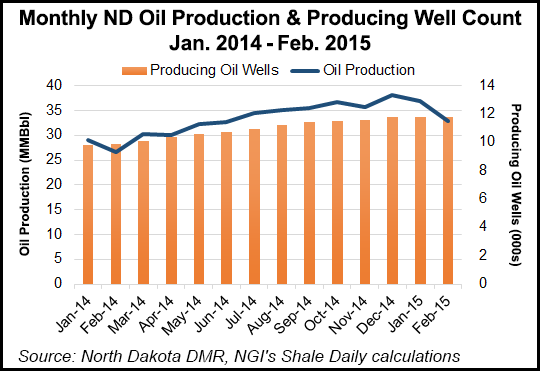 In the latest report from Lynn Helms, director of the Department of Mineral Resources (DMR), January-February production continued downward, following all-time record levels reached in December. February is the most recent month for which DMR has complete statistics.

While predicting that production would turn upward in June, Helms expressed surprise at how far and fast the state’s formerly burgeoning rig count has dropped in the face of crude oil prices that were cut in half by the end of last year. Rigs stood at 91 on Tuesday, he said, adding that the count was 108 in March, down from 160 in January, and less than half of the all-time total of 218 rigs operating in late May 2012.

“It is possible there could be another five rigs that operators lay down,” Helms said. “I am surprised at the really rapid rate of the rig decline because in December operators said they were going to lay rigs down as contracts expired, and that is what we built our projections around. But as they got into January-February and crude prices weakened, quite a few operators began buying out rig contracts and laying them, which can be a very expensive proposition.”

The last time North Dakota saw back-to-back monthly production declines was in December 2010-January 2011 in the midst of a record cold spell, said Helms, calling the latest back-to-back drop “unusual but modest” (about 1%). There was only one added producing well in February, he said.

“I expect 1-2% monthly declines for March, April and May, so we’ll enter June with the big trigger [state tax incentives] kicking in and about 1,000 wells uncompleted [unfracked], including 125 wells that have to be completed, so I think we’ll see a big catch-up in June that will likely take us back up close to the 1.2 million b/d peak,” said Helms, who predicts that the state will end the year where it began at around that production level.

In the midst of the state’s production slowdown, North Dakota’s stepped-up regulations are on track to cut the amount of flared natural gas at the wellhead and meet new oil conditioning requirements to address safety concerns tied to rail transport of crude. Helms said the February gas capture rate of 81% is the best mark yet in efforts to get it to 90%.

Cutbacks have been more pronounced on the Fort Berthold Reservation lands where the rig count had dropped by a bigger percentage in February following a ruling by the state tax department that an early tax incentive for operators triggered by the low oil prices does not apply to operations on the federal reservation lands. “With that, companies have refocused their efforts off the reservation,” Helms said.

On the positive side, gas capture was 82-83% on Fort Berthold, which previously was lagging statewide efforts to cut into flared gas totals.