North Dakota Gov. Jack Dalrymple told a record crowd of nearly 4,200 participants at the Williston Basin Petroleum Conference Wednesday that the past days of relatively light regulation of the oil and gas industry in his state are over. 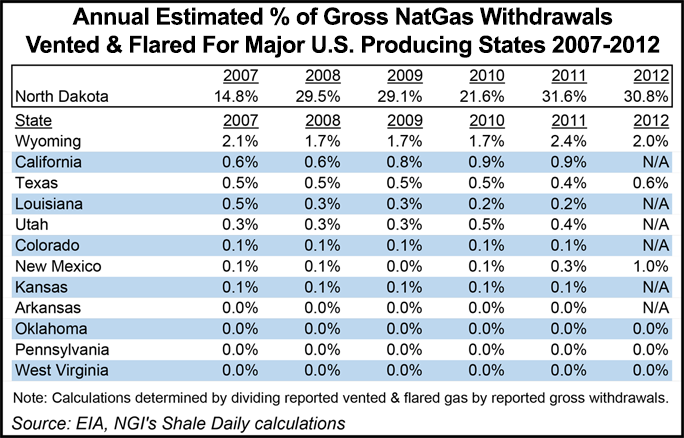 Focusing on a joint state-industry effort to clamp down on associated gas flaring as production soars, Dalrymple said his state has created incentives and asked for help from the industry to bring down current flaring levels of 33% to under 10%.

“We’re addressing the flaring issue on a daily basis,” said Dalrymple, adding that North Dakota law allows flaring for up to a year after production begins and after that operators must get special exemptions or have wellsite generation to burn the gas to produce electricity. “[In the past], we have been easy on companies, and at times given them exemptions, but we’re not going to do that anymore.”

The state has new requirements for gas capture plans before new drilling permits will be issued. “We want to know that there are plans in place to either gather or use the gas at a point in time a year after production begins,” Dalrymple said. “We’re going to follow through and enforce the requirements. There is going to be a reduced flaring to no more than 10% in North Dakota.”

Separately, the state’s chief oil/gas regulator, Lynn Helms, director of the North Dakota Department of Mineral Resources (DMR), explained to the petroleum conference attendees that flaring is a much more difficult problem in the state because 99% of North Dakota’s gas is associated with oil production. There virtually is no dry gas, unlike other major oil and gas producing states, such as Texas, Colorado and Wyoming where the proportion of associated gas is so relatively low that all of those state’s supplies could be flared and their percentages would be 11% or less.

Helms said 11% of Texas gas was associated with oil; 4% in Colorado and 1% in Wyoming. In North Dakota the issue is more of a “war” that involves various, complex battles, according to Helms and industry operators trying to address it, such as Oneok Partners LP’s growing team in the Bakken.

As a member of the North Dakota Petroleum Council’s (NDPC) task force on flaring, Oneok executives are convinced the war can be won, but with different plans of attack, given the area of the battles. “The more we work together as an industry and more forward-looking information we share back and forth with our producers, the more effective we’re going to be in putting out the flares,” said Kevin Burdick, vice president for gas gathering/logistics, during an interview with NGI at the Williston Basin conference.

Burdick said that unlike the oil/gas production itself, which is driven by technology advances, flaring is not going to be doused by similar advances. “[They] are probably negligible; there are always going to be improvements, but I don’t think we will see a fundamental change on the horizon.”

Oneok’s representative on the task force, Christy Williamson, director of acquisition, said that the new state requirements June 1 for gas capture plans with each new drilling permit will “increase the communications between midstream providers and the producers a lot sooner.

“I think increased communications will allow us to be planning for things one to two years out that we may not have known about normally in that same time span,” Williamson said. “I think we can gain some efficiency as well as being better able to plan for where and when these wells are located, and be ready for any size of the wells.”

Another major change that affects mitigation of flaring is the move to multi-well pads in the Williston Basin, she said. “If there are going to be a dozen or more wells on a pad, the planning well in advance becomes more critical.”

Among the 6,500 miles of gathering pipelines that Oneok operates in the Bakken, only a small portion has been built since the shale boom, Williamson said. ‘There is a lot of legacy pipe that is probably too small for these large, multi-well pads, so the increased planning that we see coming out of the task force becomes critical.”

Multi-well pads are adding to the challenges, along with the variation in the geology through the basin, according to the Oneok executives.