The North Dakota Industrial Commission has extended until Aug. 15 the deadline to submit proposals for a natural gas pipeline connecting the western and eastern portions of the state. 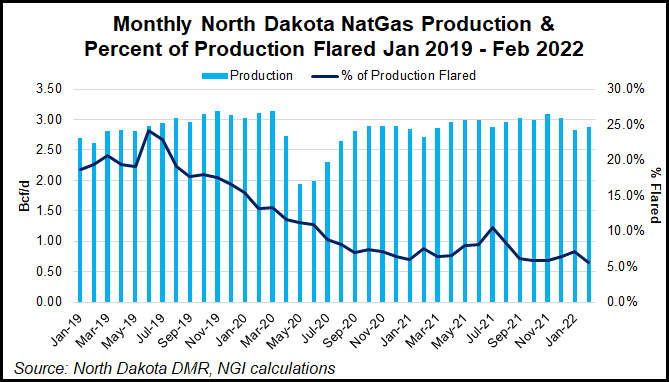 The state legislature in 2021 approved $150 million in grants to fund the project, stipulating that $10 million of the total must be used for a section to transport gas to Grand Forks County.

No proposals for the larger $140 million component were received by the May 1 deadline.

As for the larger west-to-east project, “The need and the desire is just as strong today as it ever was, looking at gas production growth expectations in western North Dakota [and] economic development opportunities that exist in eastern North Dakota,” Kringstad told NGI’s Shale Daily. The goal “is to find a way to couple those two sides of the state together with appropriate natural gas infrastructure.”

Eastern North Dakota is home to the state’s largest city, Fargo, along with “a tremendous amount” of opportunities to supply incremental gas demand from agroindustrial consumers, Kringstad said.

The call for proposals does not define a precise route or transport capacity for the west-to-east pipeline.

Kringstad said some of the hesitancy by companies to submit bids is because of cost inflation for materials. The regulatory uncertainties have become synonymous with greenfield pipeline projects nationwide in recent years, he said. The project would likely fall under FERC jurisdiction, adding to the required regulatory hurdles.

In a letter sent to Kringstad in late April, which was first reported by the Associated Press, WBI Energy Transmission, a subsidiary of Bismarck, ND-based MDU Resources Inc., said it would not submit a proposal. WBI cited inflationary pressures and uncertainty around the siting and regulatory process.

Natural gas production growth has outpaced that of oil in the state, even as operators have maintained discipline on gas flaring. The statewide gas capture rate averaged 95% in March, up from 94% in February, according to North Dakota’s Department of Mineral Resources. Gas production, meanwhile, rose 4.6% over the same period.

April production figures, though not yet released, are expected to be lower than March, due to back-to-back blizzards that temporarily shut down nearly all of the state’s gas processing plants.

The occurrence, Kringstad said, “puts a big exclamation point on the value and importance of interconnected pipeline systems.”