Covid-19 is continuing to cast its dark shadow across the energy sector, as more layoffs are announced and further reductions to capital spending marred the end to the first quarter. 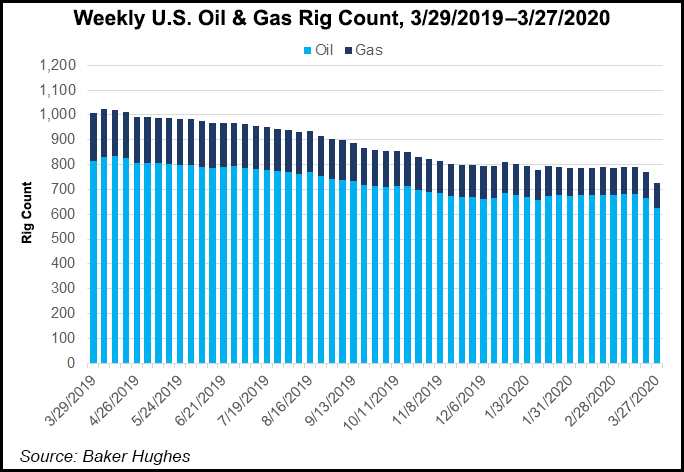 Schlumberger Ltd., the world’s largest oilfield services operator, plans to reduce capital expenditures (capex) by around 30% from 2019 and lay off an untold number of employees who work in North American land operations. CEO Olivier Le Peuch had signaled the capex reduction earlier in March. A “rapid reduction” in the rig count is forecast for 2Q2020, which could trough to 2016 levels, Le Peuch said.

Schlumberger, which usually kicks off the quarterly energy sector earnings season, is scheduled to report first quarter results on April 17.

In the Lower 48, the toll of the pandemic and excruciating oil prices has forced exploration and production (E&P) companies to cut capital spending by double-digits across the board.

Marcellus Shale heavyweight Range Resources Corp. has cut its all-in capex to $430 million from $520 million. The Fort Worth, TX-based independent still expects to maintain production at around 2.3 Bcfe/d for the year.

“Having met our firm transportation commitments in the Marcellus, we have flexibility in our development program, as evidenced by the 40% reduction in 2020 capital spending compared to last year,” CEO Jeff Ventura said. However, the “near-term challenges in commodity prices” mean “sustainably low maintenance capital is paramount…”

Beyond the short-term headwinds in demand, Range’s management team sees the potential for “meaningful improvements” in natural gas and natural gas liquids pricing because there are significant capex and activity reductions across the Lower 48 while global demand increases.

Permian Basin pure-play Diamondback Energy Inc., which in early March became one of the first Lower 48 E&Ps to proactively respond to deteriorating conditions, on Tuesday set full-year capex at $1.5-1.9 billion, up to 30% lower year/year. The Midland, TX-based independent expects to exit the third quarter with eight operated rigs and plans to drop one more before the end of the year.

After returning from a “one-to-three month” fracture/completions holiday, Diamondback expects to operate three-to-five completion crews. Full-year production guidance has been revised to 295,000-310,000 boe/d.

“Diamondback’s revised 2020 capital budget and operating plan reflects the swift changes we have made in short order as our industry deals with a market that is changing daily due to an unprecedented global demand shock,” CEO Travis Stice said. “Size, scale and cost structure are paramount in this market, and Diamondback’s cost structure is built to withstand commodity price shocks. Almost all of our anticipated 2020 production is now hedged and we have built downside protection in 2021 to prepare for lower-for-longer oil prices.”

Most of Diamondback’s oil production from the Permian is to flow through the Epic and Gray Oak pipelines beginning in April, “where we have both firm transportation on each respective pipeline and associated long-term firm sales contracts tied to the length of our firm transportation commitments,” Stice said.

“The majority of our remaining oil production, which is currently exposed to the Midland market, is protected in the form of basis hedges. In addition, less than 10% of our current oil production receives West Texas Light pricing.”

Denbury Resources Inc., an enhanced oil recovery specialist with projects on the Gulf Coast and in the Rockies, has reduced capex by 44% to average $95-105 million. The Cedar Creek Anticline carbon dioxide (CO2) tertiary flood development project also has been deferred “beyond 2020.”

Based upon current projections, Denbury’s full-year production should decline by around 3,000 boe/d from the 54,500 boe/d midpoint of initial projections. Production could be further curtailed by “future regulatory actions or limitations in storage and/or takeaway capacity,” management noted.

“We remain highly focused on controlling what we can control in this challenging and uncertain environment,” CEO Chris Kendall said.

Canadian oil and gas operators also are swiftly reacting to the miserable conditions.

Calgary-based Imperial Oil Ltd. has revised its capital outlook down by 30% to C$1.1-1.2 billion for 2020. In addition to reducing spending, Imperial has identified opportunities to reduce operating expenses by C$500 million from 2019 levels.

“The current Covid-19 pandemic, as well as business and commodity price environment, poses many challenges for our industry,” said Imperial CEO Brad Corson. “Imperial’s integrated business model, high quality asset portfolio, and strong balance sheet offer valuable stability during this period, and we are taking steps to exercise flexibility in our plans to respond to market conditions by reducing our capital investment and operating costs.”