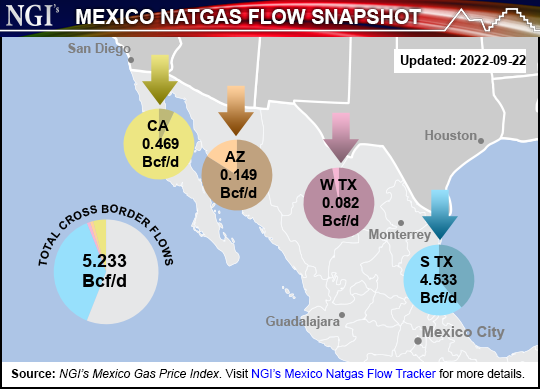 After five sessions of losses, the October Nymex gas futures contract settled at $7.779/MMBtu on Wednesday, up 6.2 cents day/day. November gained 5.5 cents to $7.827. But then a bearish U.S. storage print sent futures prices plunging below $7.40/MMBtu.

Even as the supply picture in North America continues to improve, Morgan Stanley analysts see U.S. inventories entering winter about 10% below normal. Supply growth should then close the storage deficit next year, meaning prices of around $5.25 through 2023, analysts said.

In Mexico, IPGN natural gas prices jumped to a record $8.363/MMBtu in August. This is compared to $6.759 in July and $4.220 in August of last year, according to the latest monthly index published by the Comisión Reguladora de Energía (CRE). The CRE used 383 transactions from information provided by 30 marketers to calculate the June IPGN index, which is the most recent available.

Mexico imported 5.24 Bcf via pipeline from the United States on Thursday, according to NGI calculations.

The CFE filed a civil case at a Harris County court in Houston that seeks damages “over $1 million” against former directors of the company for alleged corruption in the awarding of natural gas contracts.

In other regulatory news, local press reported that upstream regulator Comisión Nacional de Hidrocarburos (CNH) was looking into Petróleos Mexicanos (Pemex) irregularities at the gas-rich Ixachi field, including exploration and production activities not previously authorized by the regulator. This follows a CNH fine early in the year on Pemex for excessive flaring at the field.

Commissioner Alma América Porres Luna has taken over the helm at CNH as it waits on the appointment of a new head following the resignation in August of Rogelio Hernández.

In infrastructure news, Canada’s TC Energía awarded a contract to privately held Allseas for Mexico’s 1.3 Bcf/d Southeast Gateway project. The company’s vessels will install the 36-inch pipeline, which will run 700 kilometers (435 miles) south along the coast from Tuxpan connecting the ports of Coatzacoalcos and Dos Bocas.

Pipelay is expected to commence in 2023, with the pipeline in service by mid-2025, Allseas said. In 2017, the company also installed the 685 kilometer, 2.6 Bcf/d Sur de Texas-Tuxpan pipeline, which moves natural gas supply from basins in Texas to southern Mexico.

Demand on Mexico’s Sistrangas on Wednesday (Sept. 21) was 4.678 Bcf, up from 4.664 Bcf a day earlier. Mexico gas production fed into the system was 1.267 Bcf. Southeast production dominated the total, with 701 MMcf from the region injected into the pipeline system.

The power sector was the biggest user of natural gas on the Sistrangas on Wednesday, at 1.5 Bcf. This was followed by the distribution segment (1.125 Bcf) and Pemex (1.081 Bcf).

On Thursday, the U.S. Energy Information Administration (EIA) reported a 103 Bcf injection into natural gas storage inventories for the week ending Sept. 9. The print was the highest of the year.

The South Central region saw a 31 Bcf increase in inventories, which included a 19 Bcf injection into nonsalt facilities and a 12 Bcf increase into salts, according to EIA. Until Mexico develops storage capability, this is the storage system most readily available to the country.