North America will spearhead a recovery in global upstream investment in 2017, with U.S. spending — weighted on the onshore — forecast to jump by 24.5%, while Canada outlays will be 9.5% higher, according to an annual survey by Evercore ISI. 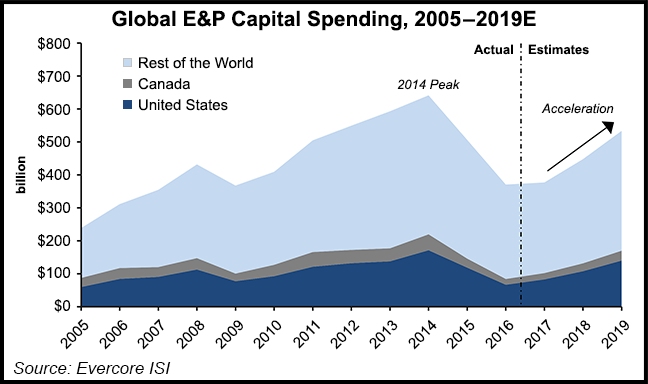 If oil and natural gas prices continue to climb, spending in the coming year could go even higher, he said.

U.S. spending is pegged to rise from around $66.51 billion to $82.77 billion, while Canadian E&Ps are expected to raise spending from around $17.54 billion to $19.21 billion. However, those are “conservative” estimates, West said, as the survey was completed before the Organization of the Petroleum Exporting Countries in late November formally agreed to reduce oil output beginning Jan. 1.

Recent formal announcements by a few E&Ps with budgets above $100 million have featured 60% year/year increases on average, a revealing trend despite the limited sample. For example, U.S. onshore operator PDC Energy Inc., which mostly works in the Wattenberg field and Permian Basin, plans to increase capex by 83% next year to $750 million. Another Wattenberg player, Extraction Oil & Gas LLC, also the first U.S. E&P to go public in two years, is boosting its 2017 spending by 137% to $795 million. Calgary-based Cenovus Energy Inc. expects to spend 33% more than this year, while cross-town rival Crescent Point Energy Corp.’s spending should be 32% higher.

A sample of the majors shows a projected 15% cutback in spending for 2017, following back-to-back 21% declines in 2016 and 2015. Chevron Corp., said West, has shown the biggest reduction in overseas spending to date, as big projects are completed and more funding is moved to U.S. land, particularly the Permian Basin.

Overall, the pace of international capex declines is “moderating and we believe 2017 will mark the bottom,” he said. The biggest cutbacks are seen in Latin America, where E&Ps expect to reduce spending by 13% year/year. Russia/Former Soviet Union is to be one of the few growth regions, with spending likely up 12%.

An uptick in spending could not come soon enough following a devastating period. Global upstream capex last year fell below $380 billion for the first time since 2009, with the most severe cutbacks in North America, where capex now is on pace to fall 42% year/year following a 33% decline in 2015.

The “dominant” decisions on how much to spend will be determined by cash flow, with nearly two-third of the respondents (64%) citing it as the No. 1 factor, followed by oil prices (52%).

“History, however, shows that E&Ps almost always spend in excess of cash flow,” West said. He pointed to the 28 E&Ps covered by Evercore analyst Steve Richardson, who is estimating his group will outspend cash flow by a “whopping 49% in 2016, with that number falling to 13% in 2017 and minus 12% in 2018.”

On the positive note, the current oil price of nearly $50/bbl West Texas Intermediate (WTI) already is higher than the survey’s 2017 E&P outlook of $49.36, West said.

Capex could be cut if oil were to fall to $40/bbl and gas declined to $2.33, “comfortably below current spot prices,” West noted. “The risk of gas-directed capex cuts…appears unlikely, with just 17% of respondents cutting in the $2.50-3.00 range.” Current Henry Hub prices of around $3.44/Mcf are “far from the $2.50-3.00 range for operators to start decreasing spending. As a result, we foresee minimal capex risk for natural gas-directed activity in the oil patch.

Meanwhile, pricing is on the rise within the oilfield services segment, which could test some E&Ps as they restaff and move more equipment into the field.

“We expect a number of producers will have to revise budgets upward to reflect these pricing changes or risk missing production targets,” West said. “Given rising service costs and less efficient crews, we believe well costs could rise by a third in some cases. One can’t have his cake and eat it too.”